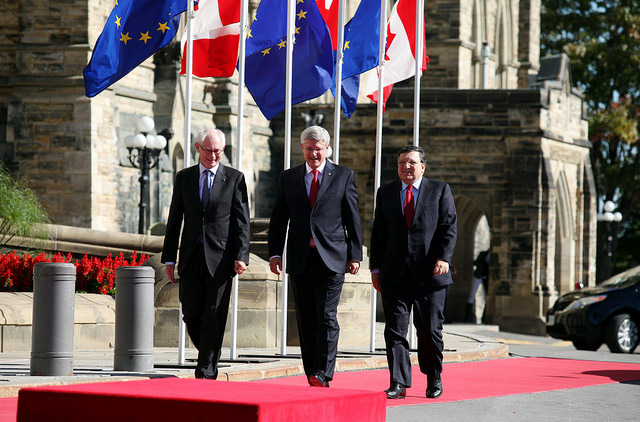 CAMPAIGNERS across the European Union (EU) have warned about the deal set to be finalised between the Canadian Government and the EU that will result in US and Canadian companies having the right to sue government for breech of their commercial rights.

The groups were responding to the findings of a new report released Monday by anti-TTIP campaigners Global Justice Now and the Corporate Europe Observatory.

In addition to support for the trade deal in the EU, groups have lamented the commitment of the UK to pursuing such an arraignment regardless of the Brexit vote.

"Particularly incredible is that the British government – which says it wants to reclaim powers from the EU – is actually trying to implement this deal before a vote, or even debate, in Westminster has taken place." Nick Dearden

Nick Dearden, spokesperson for Global Justice Now said: "CETA would open up our government to a deluge of court cases by North American multinational corporations and investors. It presents a threat to our ability to protect the environment, to protect the public and to limit the power of big banks. It’s thoroughly undemocratic and must be stopped.

"Particularly incredible is that the British government – which says it wants to reclaim powers from the EU – is actually trying to implement this deal before a vote, or even debate, in Westminster has taken place.

"They want to lock us into this deal so it still applies after Brexit, and no government would be able to get out of CETA without giving a 20 year notice period. How is that 'taking back control'?"

The report was released following a weekend of demonstrations across Germany which saw over 300,000 protestors turn out opposed to the signing of the deal and a vote at the German Social Democratic Party (SPD) conference confirmed support for the deal.

Additionally Dearden's comments come in the wake of the declaration by the German Vice Chancellor Sigmar Gabriel and SNP MEP Alyn Smith that the controversial trade deal between the EU and the US known as Ttip "is virtually dead".

The Comprehensive Economic & Trade Agreement (CETA), however is due to be signed by EU governments this October, and will be counter signed by the European parliament in November.

Legislators of the EU and European Governments had posited that the burial of the TTIP agreements meant that public services and corporate accountability were secure however, on Saturday, over 300,000 people in Germany protested against CETA.

Sigmar Gabriel who is also SPD leader has championed CETA as economy minister and allow his centre-left party prove its "business credentials”, causing tensions only resolved when the party conference voted in favour of CETA as a policy yesterday.

Canada has been the most sued government in the western world being sued 37 times.

The report, published by campaign groups including Corporate Europe Observatory and Transnational Institute, states this legal system would undermine the democratic legal framework of nations and "could dangerously thwart government efforts to protect citizens and the environment."

The report also found that Canada had been the most sued government in the western world being sued 37 times, mostly for trying to introducing better environmental regulation, with liabilities running into the billions.

Moreover governments in Europe will be at risk of being sued by the biggest US multinationals through subsidiaries companies registered in Canada.