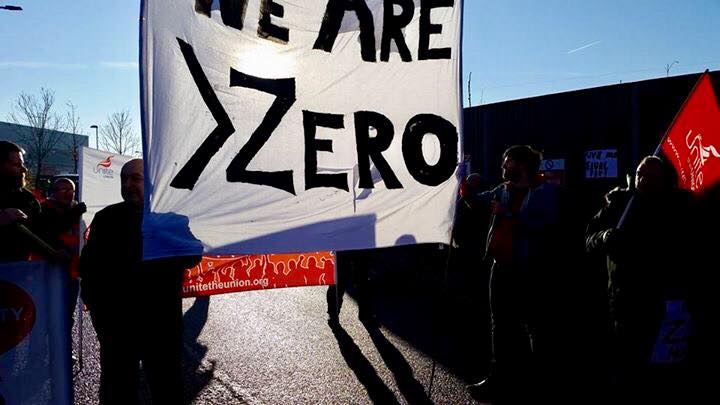 YOUNG WORKERS who were dismissed without pay from a cancelled Green Day gig on Tuesday (4 July) are organising to pursue their rights.

The gig at Glasgow’s Bellahouston park was cancelled due to “adverse weather” and stage problems according to organisers PCL Presents. According to dismissed staff, up to 200 agency workers were dismissed without pay despite already having worked for around 2 hours for staff sub contractor, OnPoint.

Frsutrated by the lack of pay, which many young workers had travelled from outside Glasgow for, some of the staff are organising to get back what was denied to them.

They have teamed up with a group which has waged several succesful campaigns for pay and working conditions in the service and hospitality sectors, notorious for low pay, zero hours contracts and abuses of workers’ rights.

“By using zero hours contracts and relying on folk not knowing their rights, companies alway try to get away with not paying people properly.” Better than Zero

A statement by the Better than Zero campaign group reads: “If you were supposed to be working at the Greenday/Rancid gig in Glasgow on Tuesday 4th July and are worried about not being paid, come along to this meeting.

“We are a campaign group set up to stop bosses and companies exploiting staff. By using zero hours contracts and relying on folk not knowing their rights, companies alway try to get away with not paying people properly.”

BtZ members working at the gig were the first to report the failure to pay wages.

Unpaid staff and supporters are meeting on Monday (10 July) at 6:30pm at the STUC headquarters in Glasgow.

The group also called on workers not directly effected by the Green Day gig incident but concerned about the work practices used on the day, and across so much of Scotland’s booming.

In January BtZ  succesfully pressured G1 group, one of Scotland’s largest hospitality employers, to end a range of practices including forcing staff to pay of work uniforms and fines for marginal lateness.

They also helped to end the practice by the Las Iguanas resteraunt chain of taking staff tips.

PCL Presents were approached for comment, but had not responded by time of publication.