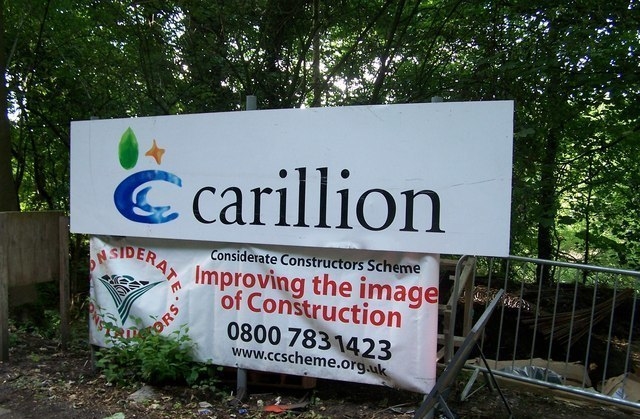 British construction and managed services giant Carillion has formally entered into liquidation, leading to questions about the ability of corporations to run public services

INDUSTRY GIANT CARILLION announced on Monday morning that it was entering compulsory liquidation as last-minute talks had failed to find creditors to secure the company’s future, resulting in the need for the government to ensure key public services continued.

The UK Government has said it holds around 450 public contracts with Carillion, including some for reserved areas affecting Scotland such as the provision of Ministry of Defence housing for military personnel and their families.

Government contracts represented around 30 per cent of the companies reported revenue in 2016.

Scottish Government contracts have also been awarded to the firm, including work on the Aberdeen Western Peripheral Route.

“This kind of anti-social enterprise only benefits shareholders and directors. Locally owned social enterprises and co-operatives are the only real alternative to deliver our public services. The immediate priority should be maintaining public services and protecting the jobs of workers and small businesses in the Carillion supply chain.”

The UK Government said that although the situation is regrettable, it cannot be the taxpayer’s responsibility to bail out private companies.

UK Government ministers initially played down any direct costs, but the failure of Carillion to complete work will burden government budgets as they find new ways to manage the contracts when they are sold back in the administration process.

Trade unions joined Social Enterprise Scotland in calling for a radical change to how public services are managed, with train drivers’ union ASLEF saying the public contracts should be brought back into public control immediately.