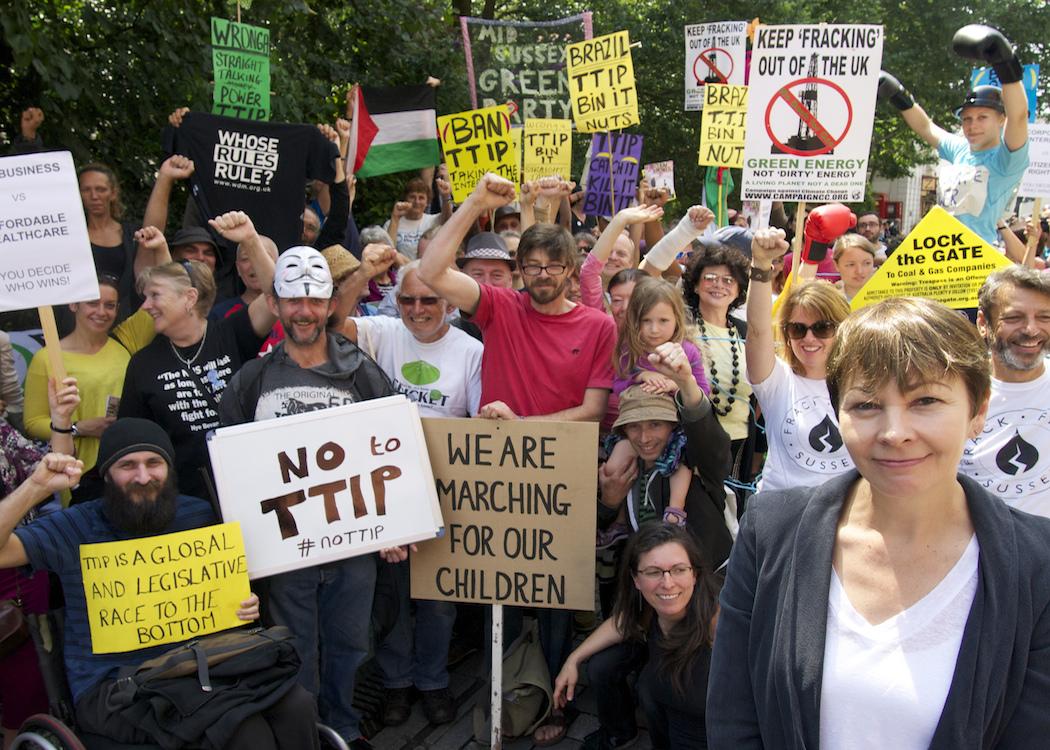 SHE BECAME the dominant figure for the campaign for environmental justice in the UK. From 2008 until 2012 she was the leader of the English and Welsh Greens before she decided it was “time to make space for others”.

Even now, despite her successor Natalie Bennett becoming the party leader, as the only Green member of parliament, Caroline Lucas remains the most accomplished advocate for action in the face of the climate change crisis.

Visiting the Scottish Greens conference in Glasgow, she also provides a rare welcoming link between left-wing campaigners in England, Scotland and the floor of the house of Commons.

“There are a huge number of challenges,” Lucas says when asked about the range of threats posed by current Tory policy.

“Certainly top of our list are the twin challenges of austerity and climate change. Ironically, if we were to take the climate crisis more seriously it would help get us out of the economic difficulties we are facing.

“What we are arguing is that we need a massive investment in green energy and energy efficiency and home insulation. That would be a wonderful way of getting our climate emissions down, of making sure everyone can afford to heat their homes, and it would be a great way to create jobs as well.”

“I think we need to remember that the Conservatives only have a majority of 12…we do have a chance of beating them on this.” Caroline Lucas

The persistent push of Greens in England is matched in Scotland at a conference where Patrick Harvie MSP called for 6,500 new green energy apprenticeships in Scotland.

At Holyrood the Greens have won concessions from the Scottish National Party on energy, climate change and investment – but with a Tory majority government the challenge is harder south of the border.

“That’s what makes it so criminal to see what they [the Tories] have been doing just over the last few months, tearing up commitments to support solar energy, taking any support away from wind energy on shore and instead promoting yet more fracking and nuclear.

So will the Tories open their ears to Green alternatives?

“I’m always positive,” Lucas says. “I think that’s a better way to be. I think we need to remember that the Conservatives only have a majority of 12. That means if we can get other parties in opposition to work together we do have a chance of beating them on this.”

“From south of the border we look at Scotland with enormous admiration and took huge inspiration from how the Yes campaign was run, particularly the role of the Scottish Greens in that campaign.” Caroline Lucas

There are small cracks. Greg Barker, the former Tory minister for energy, has just criticised Westminster’s policy direction that is pulling the carpet out from under the feet of renewable energy companies.

But with the Greens – who won over a million votes in May – restricted to just one seat under the Westminster voting system, Lucas is dependent on building coalitions outside parliament and with Labour and the SNP inside the palace of Westminster.

The SNP and the left-wing group within Labour have both been emboldened over the last year, while the Greens in England and Scotland have experienced their own membership surges.

The SNP, who Harvie described at the conference as having a “mixed record”, is viewed with a mixture of enthusiasm and scepticism among the English left. So what does Lucas make of the SNP?

“Trade union rights are very rightly organised at the most appropriate level… I think having individual nations making those decisions is entirely right.” Caroline Lucas

“Relations are always very cordial and they were very helpful to me in the early days when I was first elected when there was just six SNP members,” Lucas states carefully.

“From south of the border we look at Scotland with enormous admiration and took huge inspiration from how the Yes campaign was run, particularly the role of the Scottish Greens in that campaign,” Lucas says.

“I think they were unfailingly constructive, and positive and hopeful. That caught the mood, particularly of young people in the country.

“One of the things I’ve wanted to learn from Scotland while I’ve been here for the last few days is what we could learn from that experience when it comes to the European Union referendum next year or by the end of 2017.”

“I couldn’t tell you where we went but I remember we got into a hell of a lot of trouble and were back extraordinarily late. Parents were furious and we had a fantastic time.” Caroline Lucas

Lucas, and any Green pro-European Union campaign, will face the same challenge of making its own case in a referendum without being enveloped within the arguments of wider parties.

A more imminent challenge is how Lucas votes in parliament on the Scotland Bill, which will receive further consideration later this month [October].

Some nationalists criticised Lucas for opposition ‘full fiscal autonomy’ in one Westminster vote, which she explained at the time as a decision led by colleagues in the Scottish Green Party.

In person, however, Lucas is more positive about supporting further devolution – including the Scottish Trades Union and SNP proposal to devolve trade union legislation and the minimum wage to Scotland.

“The Green Party of England and Wales is completely in-tune with the Scottish Green Party that Scotland for example should have self-determination and things like trade union rights are very rightly organised at the most appropriate level,” Lucas explains

“I think – as long as you have a floor of rights – having individual nations making those decisions is entirely right.”

Lucas has a speech to make. And then a book-signing with eager Green fans. But before those appointments I ask, given she’s in Scotland’s cultural capital, if she’s ever had a good night out in Glasgow.

“I had a friend who lived up here and I came to visit her. I couldn’t tell you where we went but I remember we got into a hell of a lot of trouble and were back extraordinarily late. Parents were furious and we had a fantastic time.”

Although she spoke at Strathclyde University the night before conference, Lucas didn’t get the chance to sample its multi-bar student union. “I’ll add that to my next itinerary,” she says, before running off to her more serious endeavours of climate, economy and social change.