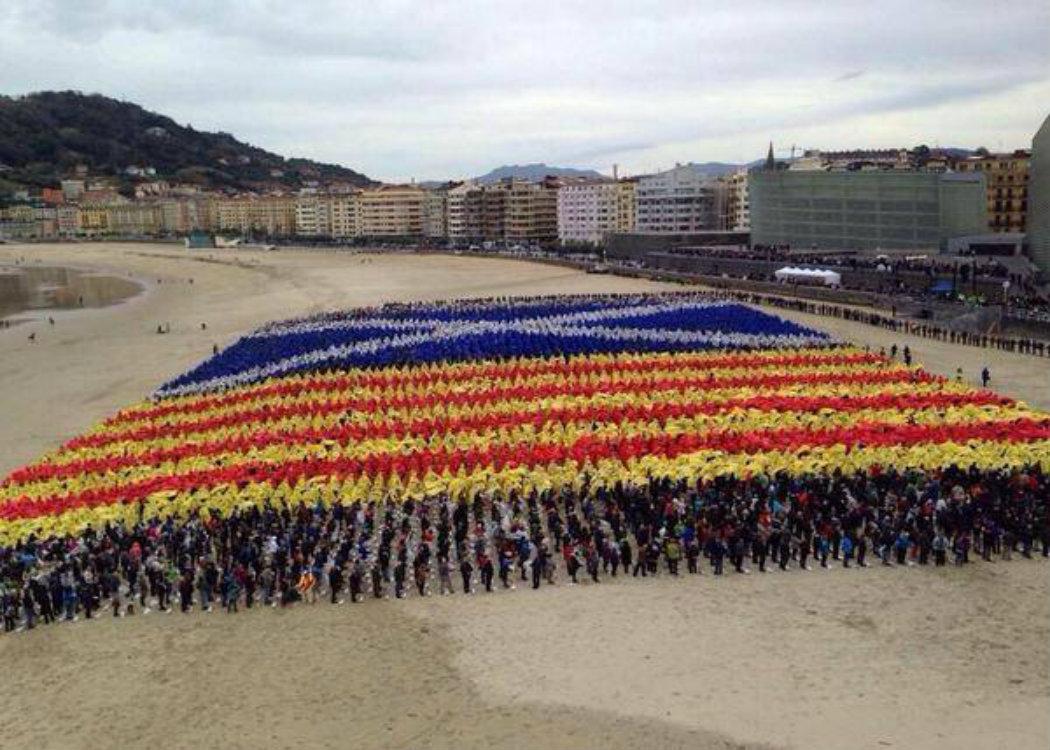 As Catalonia votes as part of the Spanish general election, MEP Ramon Tremosa calls for an independence referendum plan between his nation and Scotland. He is also author of the book ‘Let Catalonia Vote’. (Portic: 2015)

SINCE September 27th when Catalonia held its plebiscitary independence elections, my colleagues in Brussels have made many requests for information about Catalonia. Embassies, ‘think tanks’, the international media, and influential MEPs have been asking me about to an unprecedented degree. Before 27/9, Catalonia was of interest mainly those who explicitly showed sympathy, such as the Scottish and Flemish. Now everyone is asking for information: those who have always been interested, those who were indifferent, those who hold a dim view, and even some Spanish MEPs.

Seen from Brussels, what Catalan supporters of independence did on the 27/9 is a huge deal, much bigger than it is perceived from Barcelona. Although Catalans have not yet fully grasped it, they withstood intense daily resistance to keep the process alive. I hear, “Common people beat a Spain that had colonies until recently and for hundreds of years ruled a great empire”. A Spain that ruthlessly used all the instruments and apparatus of the state to win the 27/9 elections elections for the unionist parties: including diplomacy, officials, intelligence services, post offices, courts, banks, churches, tax agencies, newspapers, television, radio, and police units generating false information. The day after, however, the Spanish state saw the same headline around the world press: ‘Victory for independence majority.’

“Scots and Catalans can choose in a coming year to hold a unilateral independence referendum (UIR), without agreement with London and Madrid respectively. We could do it on the same day.”

Given everything the Spanish state apparatus mobilised, 27/9 was a monumental step in the independence process, even more that November 9th when the Catalan Parliament adopted the declaration of initiation of the independence process. The feasibility of independence was finally grasped by Catalans and became credible. Europe is impressed by our impeccably civic, peaceful, creative and festive organisation, without violence or riots, and by channeling the collective will through parliament. The ‘Junts pel Si’ (Together for Yes: a coalition of pro-independence parties) campaign was impressive in its consistently excellent organisation, holding among the most massive electoral rallies in recent European history. We are a nation on the move.

Fortunately Catalans, the current drawn-out discussions between Junts pel Si and CUP (Candidatura d’Unitat Popular: a left wing independence party not affiliated with Junts pel si) is usual in Europe in many parliaments. Government formation negotiations can be long, complex, and last months. In Belgium in 2009 it took 530 days to form a government, but curiously without a Belgian government the deficit and public debt fell considerably, and managed to meet the criteria for fiscal discipline in the EU! In Catalonia recent major international media coverage has focused both on the electoral victory of the 27 September, and the November 9th resolution starting the process of independence. They have noted that there are that 72 deputies in favour and 63 against.

“If there is a failure to form a government, and there are new elections in March, then it will be interpreted as the inability of Catalans to make decisions over national issues.”

If there is a failure to form a government, and there are new elections in March, then it will be interpreted as the inability of Catalans to make decisions over national issues. This was described by Richelieu, as cited by John Elliot in ‘The Revolt of the Catalans’, when France was also considering the possibility of an independent Catalonia. The French cardinal saw the Catalan elites as incapable of governing themselves; “nothing can be imposed on this nation to prevent it from being consumed in internal fights”. For now, however, European policy values the electoral decision taken by two million voting explicitly for independence on 27/9, which left Spanish diplomacy without arguments to the contrary.

The arguments of the Spanish state against electing pro-independence parties were based on two premises. First, there has never been nor will there ever be a majority of the Parliament of Catalonia in favour of independence. Second, when 75 per cent the electorate votes in Catalonia, the unionist parties will clearly prevail. The results of September 27th has destroyed this argument and Spanish diplomacy is disoriented to the point that Rajoy publicly let slip, “whether there is agreement between Junts and CUP or there are new elections in March, both perspectives are bad for Spanish interests”.

Regarding the first point, the 2014 European elections and the municipal elections in May 2015 foreshadowed the current independence majority. The Financial Times wrote after the European elections that the Partido Populaire (current governing right party) and PSOE (Spanish Socialist Party), with 9 per cent and 15 per cent vote in Catalonia respectively, were electorally marginalised in Catalonia. Regarding the second point, electoral participation exceeded 4 million voters without incident, being 77 per cent of the census (a record in Catalonia since 1982). This percentage must be reduced to 75 per cent end because of 200,000 of Catalans abroad, only 8,000 had their ballots counted. The elections of 27/9 elections therefore have a higher democratic legitimacy in terms of turnout.

It has certainly caused a scandal in Brussels that tens of thousands of Catalans were not able to vote on the 27/9, even more when it was found that of the 8,000 votes counted 56 per cent had voted for Junts pel Si. This is a much higher percentage than the average vote obtained in Catalonia (40 per cent), which would have given Junts a decisive 63rd deputy if Catalans abroad had their votes counted, which could have now assured the investiture of the government. But in Catalonia this manipulation which could have derailed the process is no longer remembered or talked about. One of the world’s leading companies in e-voting is the Catalan Scytl, who has managed voting in the US, France and many other advanced countries.

“Catalonia and Scotland have much to learn from each other on the road to independence.”

Regarding the alleged anti-euro and anti-European nature of the CUP, potential partner with Junts pel Si, from Brussels this also looks different depending on whether one is from Madrid or Barcelona. CUP only won 8 per cent of the vote, in contrast to anti-euro parties winning much higher percentages in other Mediterranean countries. In Italy anti-euro parties reached 40 per cent in the polls (Northern League and Five Stars), and Portugal recently reached almost 25 per cent of the votes and decisively opted to choose a new government. In France, Marine Le Pen and the National Front advocate leaving the euro. Until recently, Syriza in Greece held similar hostile positions towards the euro, but since it has been governing has at least temporarily changed its stance. In Brussels, I have not heard anyone argue against forming a pact JxSi-CUP. It depends on how you look at it, but Catalonia has little electoral support for the anti-euro position, even though the crisis here is very severe as in other Mediterranean countries.

Catalonia and Scotland have much to learn from each other on the road to independence. Scotland has set the precedent for a binding referendum in Catalonia, which has contributed enormously to the democratic credibility and feasibility of independence there. Catalonia has shown an example to Scotland in terms of popular organisation and mobilisation. The ‘Yes Scotland’ campaign is now known as the finest campaign of popular mobilisation ever made in Britain, to the point that ‘Yes’ almost won.

“The feeling of mass deception of many voters who voted ‘no’ also explains the overwhelming victory of the SNP in the British election in May this year.”

Despite losing the referendum, this mobilisation indirectly led to SNP membership quadrupling, and laid the foundations for the massive victory of the SNP in UK general election in May. Only six months after losing the referendum, the Scottish independence movement had a dramatic impact on the world, because for the first time it elected an overwhelming majority SNP MP’s in Scotland (56 of 59) and quickly reinvigorated the independence cause when many presumed it dead and buried.

David Cameron, in his memorable speech the day after the Scottish referendum, took credit for saving the Union ‘for a generation’.

In May there will be Scottish Parliamentary elections and all the polls give an even larger absolute majority to the SNP than it has today. The debate within the SNP currently focuses on when to convene the next referendum. At a conference in Brussels last June 6th, First Minister Nicola Sturgeon said that if the United Kingdom voted to leave the EU in the referendum promised by Cameron (‘Brexit’), but Scotland voted to remain in the EU, it would justify calling a new independence referendum.The SNP knows that London will not agree to a new referendum, because recent polls have shown a majority in favour of independence. Cameron has not come close to fulfilling the ‘vow’, including the transfer of significant fiscal powers to Scotland, promised at the last minute to win the referendum last September. The feeling of mass deception of many voters who voted ‘no’ also explains the overwhelming victory of the SNP in the British election in May this year.

The SNP also explains that in 2012 Cameron agreed to the referendum with Salmond because he knew if London had not negotiated, the SNP would have gone straight ahead, and called a referendum for a democratic mandate unilaterally by winning the previous Scottish elections. Then, he even had the support of Scottish Labour to proceed unilaterally, as revealed to the Parliament of Catalonia in an official visit in 2013. Thus, Scots and Catalans can choose in a coming year to hold a unilateral independence referendum (UIR), without agreement with London and Madrid respectively. We could do it on the same day.

But before we Catalans have much homework to progress together with Scotland, because we cannot repeat Junts pel Si in the Spanish elections. We must get one of the two independent parties presented here wins in Catalonia, to continue showing the world that Catalonia has a multicoloured electoral map. As Scotland did last May and the Catalans did in the Spanish elections of 2011 CiU (Convergencia i Unio, centre right Catalan party coalition), Catalan elections in 2012 by the CiU, in European elections in 2014 by the ERC (Esquerra Republicana: Republican Left) and the municipal elections of 2015 by the CiU. On Sunday the 20th of December in the Spanish elections, we must go vote. In Brussles, our liberty is seen closer than it is in Barcelona.