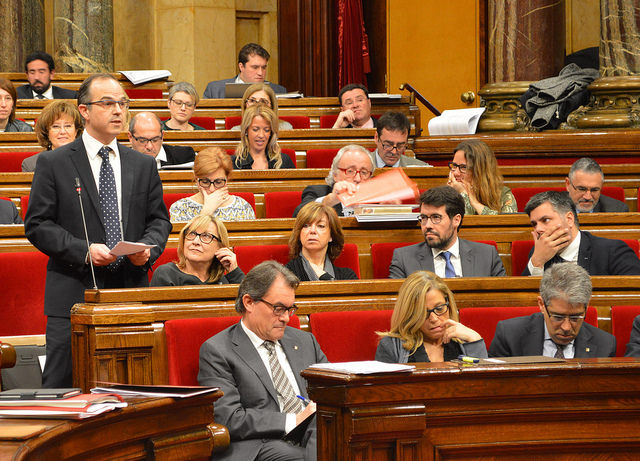 Catalan MP Jordi Turull may be arrested on Friday, following a parliamentary debate on his candidacy for president this evening

THE CATALAN PARLIAMENT will convene for a hastily arranged debate on whether Jordi Turull will become the next president of Catalonia, despite his possible arrest by Spanish authorities on Friday.

On the evening of 21 March, Roger Torrent, the speaker of the Catalan Parliament, called an unexpected plenary session to discuss the candidacy of Turull, a senior MP in the Junts per Catalunya, the party of exiled former Catalan president Carles Puigdemont.

The pro-independence parties represented in parliament, who hold a majority, agreed to the surprise move due to the fact that the Spanish Supreme Court may order the imprisonment of Turull as early as Friday, 23 March, along with other Catalan officials currently under investigation for their role in Catalonia’s disputed declaration of independence and the preceding referendum on the issue.

“I will propose to the chamber that Jordi Turull be candidate for president,” Torrent told press, only hours after Turull was ordered to appear in court on Friday.

Turull, a former Catalan Government spokesperson, has already been imprisoned by Spanish authorities over his involvement with the Catan independence movement, but at present remains free on bail.

Turull responded to the speaker’s announcement on Twitter, writing: “A huge honour. If parliament gives me its vote of confidence, I will work without rest for the progress and protection of the 7.5m Catalans.”

Speaking hours before the plenary session was due to begin, Torrent said that it would be “democratic nonsense” to imprison a newly elected Catalan president, and emphasised that Turull has “all his political rights intact”.

Initially, it was proposed that Carles Puigdemont would continue as president while in exile in Belgium, but the Spanish Constitutional Court ruled that he could not do so remotely. Puigdemont continues to face arrest if he returns to the jurisdiction of the Spanish authorities.

Jordi Sanchez, the Catalan grassroots leader and former head of the Catalan National Assembly (ANC) who is presently incarcerated on charges of sedition and rebellion, was considered to follow Puigdemont, but the Spanish Supreme Court refused to release him from prison in order to attend the parliamentary session which would invest him with the office of the presidency.

In order to be successfully appointed president, Turull will be reliant upon the support of the anti-capitalist pro-independence CUP party.

Pro-independence parties hold two more seats than is necessary to constitute a majority, so the CUP’s four MPs will represent the deciding factor.

Picture courtesy of Convergència i Unió