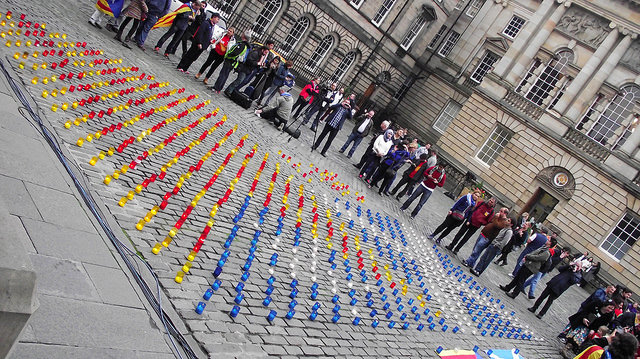 THE president of Catalonia, Quim Torra, will visit the former Catalan government minister and exile Clara Ponsati and First Minister Nicola Sturgeon in Scotland next week.

“President Quim Torra has confirmed that he will meet with Spanish President Pedro Sánchez on 9 July 9 and then arrive in Scotland on 10 July to meet with Professor Clara Ponsatí,” Aamer Anwar, Ponsati’s lawyer, said in a statement quoted in La Vanguardia.

Torra is then expected to hold a press conference with Ponsati on 11 July and have a meeting with the First Minister at Bute House, at 5pm.

The visit will come weeks before Ponsati’s extradition trial will begin on 30 July. The St Andrews University economics professor and former education minister is accused of violent rebellion and misuse of public funds, charges that could lead to 30 years imprisonment.

Ponsati was released on bail in March after voluntarily turning herself in to Scottish police in response to her own European Arrest Warrant.

READ MORE: ‘No referendum can ever be illegal’: Clara Ponsati comes out fighting, as #SNP18 pass motion of solidarity

A motion was passed unanimously at SNP conference in June in support of Ponsati, who spoke at a fringe meeting of the conference in Aberdeen, making an unapologetic defence of her and her fellow ministers actions in government.

“It was the duty of the Catalan Parliament to organise that referendum. The voters had given us a mandate – we were obliged to do it. Besides, it’s not illegal; we’ve done nothing illegal…The Spanish authorities have manipulated the judiciary, manipulated the reading of the law, manipulated the facts, and they have opened these challenges which are totally, totally illegal themselves. What is illegal is what the judiciary is doing.”

The meeting at Bute House will be the first between the Catalan president and first minister of Scotland since 2014, when Alex Salmond was first minister.

Sturgeon last spoke about the Catalan situation publicly in May during an interview with Reuters.

Asked about her views on the Catalan situation, she said that Catalonia is not Scotland and visa-versa, but: “Whichever side of the debate in 2014 you were on, we had a consented democratic process…I know there’s a different constitutional set-up in Spain, but I wish there was a consented democratic way there, where people in Catalonia could decide one way or another what its future should be.”

Referring to Spain’s jailing of Catalan pro-independence politicians, Sturgeon added: “Whether they support self-determination or independence, I think all democrats would feel a degree of discomfort about what they’ve seen in the past few months.”

The pro-independence Torra is an independent member of the Catalan Parliament. He was sworn in as Catalan President on 17 May. His first government included imprisoned and exiled Catalan ministers, but was not signed off by then Spanish prime minister Mariano Rajoy, with article 155 – allowing direct rule from Madrid – still in effect.

Torra appointed a new government which came into effect on 2 June, just as Rajoy was being ousted for new corruption charges levelled at his Popular Party, leading to Socialist Party leader Pedro Sanchez taking power.

Sanchez backed Rajoy’s actions while in opposition, but has struck a more conciliatory tone, moving Catalan political prisoners to prisons in Catalonia on Tuesday [3 July].