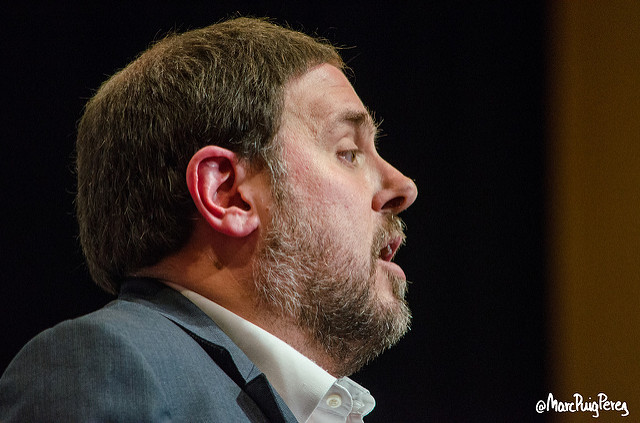 THE following is a translation of a letter sent by Oriol Junqueras to the Catalan people.

You can read the original in Catalan here. Junqueras is the legitimately elected vice president of Catalonia who is now a political prisoner in a Spanish jail, for the ‘crime’ of fullfilling an electoral mandate to establish an independent Catalan republic.

He and others are charged with sedition, rebellion, and misuse of public funds, and could potentially face 30 years in prison. Under statute, sedition and rebellion require violence, of which there has been none by the Catalan independence movement.

The days continue to pass in this jail. Metal doors open and close, intense cold, fellow inmates with whom you live condemned for all kinds of crimes; from murders to sexual assault, from bank fraud to numerous cases of narcotics trafficking.

Who is not here is any individual of any of the political parties of which there are hundreds of defendants – and convicts – for cases of corruption. At least they are not here. They must be somewhere else because they say that justice in Spain is equally applied to everyone.

I have good relationships with many prisoners. I share hours of recreation with them. I have lunch with them and ask all kinds of questions. In prison, as everywhere, there are people from all walks of life.

But, above all, real people are here. There are people willing to help you if you need anything, there are prisoners who advise you; you are advised over those with whom you must have a good relationship, who is trustworthy and with whom you should relate to. And very often they advise you with criteria.

Most of the day, however, you live in a small space; the cell. You spend 16 hours of the day in the cell, closed in and locked up. For a month my cellmate was Carles Mundó, the director who closed the Model; a paradox of life. Now my partner is Quim Forn, a beautiful person.

Estremera (prison) is a mostly routine prison. Everything is scheduled and everything goes according to prison time, supervised by civil servants. I write a lot and I read. I do sport, which is the best pastime. I play chess. And I have gotten back into the habit of writing by hand. I write handwritten letters that I send by post.

There is no social media in prison. There is no internet access, there are no mobile phones. There is no communication with the outside, except for the visits and phone calls that you do from jail, with conventional telephones. They last four minutes. Ten calls per week. I use them all, to talk to the family or the Esquerra Republicana staff.

Sometimes, you can watch TV, TVE (Spanish public TV). We will never get out if it is through the mouth of the 155 block (unionists who support the application of Spanish Constitution article 155, dissolving, sending into exile, and imprisoning the democratically elected Catalan Government). The misinformation is absolute, our voice does not exist.

The visits are a great comfort. Those of friends on the weekend, once per week. They last 40 minutes, separated by glass three fingers thick. I speak through a telephone and my ‘guests’ speak through an interphone. It’s like a phone booth.

But I insist, once again: we have to do it again. We must put the ballots in the ballot boxes with more determination than ever. We must also conciliate, form alliances, and widen the base to be stronger.

Lately, visits have made me suffer. I do not know what happened, but the requests to visit do not always reach their destination, so instead of four, the last time there were only two who could enter the cabin. The others were not authorised. Thursdays are family visits, these are also monitored but without glass in between.

One of the activities to which I dedicate more time is to open correspondence. To read the letters that I receive. I try to answer all that I can. But the truth is that I do not have the capacity.

I feel strong, in my convictions, those I have always held. On the other hand, the legal opinions hold – according to jurisprudence – that I will be able to take the oath of deputy even though I am in prison. And that I maintain these rights.

If so, I will exercise them, with all enthusiasm, faithful to the democratic mandate that emerges from the polls on 21 December. I do not know when I can get out of prison, that is sure. Leave aside the appeals.

But I have no doubt that the more popular support is expressed at the ballot box, the more strength the arguments I will have – we will also have Jordis (Jordi Sanchez and Jordi Cuixart) and Quim – leaving Estremera behind. The citizens, with their votes, will rectify a manifestly unjust situation against people who have always fought honestly, face to face.

We have never hidden, from anything or anybody. And always, always, we will do it peacefully and civicly. It is also necessary to be honest, for jurisprudence and legal rulings that allow me to exercise all rights are not guaranteed, we have already seen how they have been abrogated. But it would be difficult to deprive me of them with justification.

I’m fine, wanting to meet everyone again. I would have wanted to be able to participate in the campaign, to be able to travel up and down the country or at least to express myself in my own voice. They have not allowed this. But that is the situation and it is under these conditions that the electoral campaign is contested in my case; in spite of being the head of the list, locked in a prison on the plateau of Castile.

Let’s say that we are not competing under conditions of equality. But I insist, once again: we have to do it again. We must put the ballots in the ballot boxes with more determination than ever. We must also conciliate, form alliances, and widen the base to be stronger.

And above all, I ask for the good of all that I will not deceive; I will fight without rest, persevere, because sooner or later we will prevail. And smile, let no one remove your smile, for you will dwindle hope. There is light on the horizon, that is sure. And it is bright.

Good health and hugs to all!