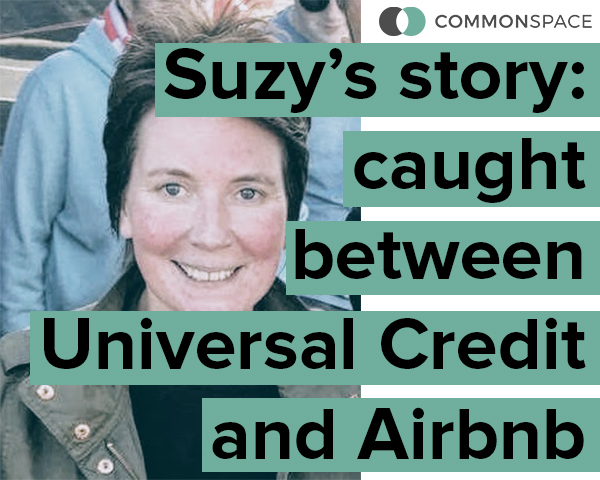 Suzy Cargill from Edinburgh’s experience at the sharp end of ‘welfare reform’ and the housing crisis has left her homeless, and considering moving away from a city she has no desire to leave

SUZY CARGILL, 46, a musician based in Leith, Edinburgh, got a call out of the blue on 10 January.

It was someone from the DWP. They said that her Employment and Support Allowance (ESA) payments were stopping immediately, as of that phone call.

“When she said that I froze – I didn’t think that could happen,” Suzy says.

Prior to the phone call, she hadn’t received any letters or calls about ESA cancellation – this was the first she heard of it.

Suzy was told she could appeal (which she did, unsuccessfully) and that she should apply for Universal Credit.

Two months earlier, Suzy got a letter from her landlord, saying she had to move out, and had two months notice. No reason was given for why she was being evicted. Suzy was still on a short-assured tenancy from before the Private Tenancy Act 2017, which strengthened the rights of tenants to stay in private rented accommodation. Therefore, she had no other choice but to prepare to move out – in January.

When January came around, and with the news Suzy was being taken off ESA with immediate effect, she only had her Personal Independence Payments (PIP) and was “lucky enough” to have some savings – not enough to find a new place, but enough to get by while sleeping on friends sofas, while she tried to get Universal Credit and a new flat sorted out.

Suzy, who has mobility problems, was left homeless. What had become of her old flat, which had been her home for years?

“I looked it up and it was being advertised as an AirBNB,” she explains. “It’s ridiculous.”

After five weeks waiting for Universal Credit to begin, and being “dismissed” on the phone as she tried to find out what the hold up was (“we’ve not yet made a decision on your application”), she contacted her local MP and MSP. The next day, she received a phone call from the DWP. The bank statements she had given going back to November were not precise enough, they needed a specific date.

“They hadn’t asked for a specific date before. I’d been waiting for five weeks and they decided then that they needed a bank statement from a specific date in November.”

Meanwhile, she got onto the council house waiting list and was given gold priority for a flat in Leith. However, the council told her that there was 250 people on gold priority in Leith, and some had been on it for two years, so she might not get anything soon.

“So I’ve been looking for a private rented flat, but it’s difficult because lots of landlords don’t want people who are on benefits, quite a lot still say on their adverts ‘No DSS’.”

After eight weeks waiting, she finally began to get Universal Credit, but has still been unable to find a new flat.

“It’s been very frustrating,” Suzy explains, “I think I’m a person that’s capable of sitting down and figuring out any problem, but I don’t see anyway out of this.”

Suzy says even since she began to look for flats at the end of last year, there has been an increase in prices, in a city that has seen a 42 per cent rise in private rent costs since 2010.

“A one bedroom will start at about £620 per month now. So the prices keep going up but the housing allowance isn’t going up, so you end up paying out of PIP to cover the rent cost.”

Stuck in an impossible position, Suzy has had to start contemplating doing something she has never wanted to do: move out of Edinburgh.

“I’ve had to start thinking about going back to Perth, even though I’ve lived in Leith for a long time and I’ve got lots of friends here, and they’ll help me if I need to get stuff from the shops and things like that.”

She says that in a group of musician friends who have lived in Leith for decades, many are also thinking about moving away for the first time.

Caught between the UK Government’s ‘welfare reforms’ on the one hand, and the AirBNB takeover of the capital on the other, Suzy’s story is the lived reality for many in Edinburgh who love the city and once felt like it was a safe, secure home, but are now made to feel they don’t belong.

“I wanted to tell my story just so people know that this is happening to real people.”

And what does she think needs to be done about it?

“They need to introduce rent caps, and they need to make it more difficult to set up AirBNB’s.

“I get it if someone sets up an AirBNB because they’ve got a spare room and want to get a little bit extra money from it, but it’s not right when you’ve got landlords with four, five or more properties letting them out on AirBNB.”

Susan Rae, local councillor: “I’m very worried that Suzy’s case can become a typical case, and in fact I think it is becoming a typical case already.

“I’m particularly concerned by the part Universal Credit has played in this. Stopping people’s benefits and transferring them over with no transition is making vulnerable people even more vulnerable, and it serious affects their mental and physical health.”

Deidre Brock MP: “Demand for homes in Leith is soaring and this pressure isn’t helped by a rapid rise in flats being used as holiday lets for tourists. There’s an urgent need for better regulations in Edinburgh and I’m glad the Scottish Government and council are looking at this.

“A lot of work is being done to tackle the chronic shortage in affordable homes but we need to keep a close eye on proposals and make sure new developments put the needs of the community first – and the definition of affordable is a realistic one.

“Not only should everyone have the right to a secure home they should know the welfare safety net is there when they need it – but the UK Government seems hellbent on punishing the poor. I’m appalled at how many constituents have been dragged into greater poverty by sanctions, cuts and delays to benefits, while Tory MPs line up for photocalls at foodbanks. Instead of their ideologically driven austerity we should spend the billions being blown on Brexit making sure our public services are properly funded and working for the people who need them.”

Ben Macpherson MSP said he did not have anything to add to Brock’s comment.

Shelter Scotland said they did not comment on individual cases, but Graeme Brown, Director of Shelter Scotland, said of the general issues it raises: “Shelter Scotland has  concerns about the growing prevalence of short term ‘holiday’ lets and the impact they can have on housing availability.

“Scotland already has a housing emergency, and so any extra pressure on the supply of housing is cause for concern. Couple that with austerity and harsh welfare reforms, including the flawed Universal Credit system – and things are getting tougher for people to find and keep a home.

“To really tackle the acute shortage of affordable housing, we need a consistent and ongoing programme of building new homes in the right places where people want to live so that people can access a safe, secure and affordable home.”

CommonSpace also asked the DWP a series of questions relevant to Suzy’s case, but had received no response by time of publication.