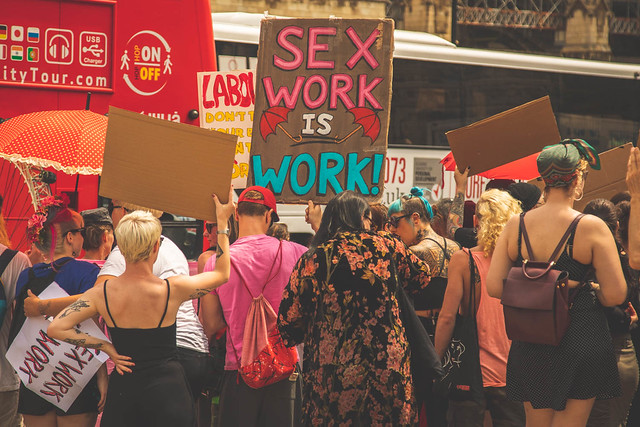 SEX worker-led charity Scot-Pep has hit back at recent calls for First Minister Nicola Sturgeon to introduce new legislation criminalising those who pay for sex, arguing that such laws are “proven to put sex workers at risk of more violence.”

Julie Bindel, the feminist activist and author of the book The Pimping of Prostitution: Abolishing the Sex Work Myth, appeared before the Scottish Parliament’s cross-party group on commercial sexual exploitation this week, and argued that “decriminalising sex work means decriminalising violence against women and children”.

Sex work in Scotland is currently legal but aspects such as “soliciting” or “loitering” on the streets, as well as “brothel keeping”, are illegal. Concern has been raised about the interpretation of these laws by police, as it has been reported – and acknowledged by the Scottish Government – that sex workers working in pairs from a flat for protection have been prosecuted for brothel keeping

SNP policy seeks to implement laws around sex work similar to that of the ‘Nordic model’, where sex workers are not prosecuted, but those who pay for sex are.

However, a board member for Scot-Pep – which exists to fight for the rights of sex workers in Scotland, and has repeatedly criticised the Nordic model in the past – responded to Bindel’s remarks by reiterating its calls for decriminalisation.

Scot-Pep board member Carly Bell told CommonSpace: “We at Scot-Pep are aware that known sex worker criminalisation activist Julie Bindel was in Scotland pressuring our parliament, and specifically the First Minister, to implement laws that have been proven to put sex workers at risk of more violence.

“In no situation where the Nordic model has been adopted have sex workers actually been decriminalised; they remain unable to work together for safety and continue to face prosecution and police harassment.” Scot-Pep board member Carly Bell

“The proposed ‘Nordic model’ or ‘sex buyer law’ would seek to criminalise the purchase of sex, whilst decriminalising the sale of sex, in the goal of abolishing sex work under the goal of ending violence against women and girls. Despite claims of decriminalising the seller, in no situation where the Nordic model has been adopted have sex workers actually been decriminalised; they remain unable to work together for safety and continue to face prosecution and police harassment. Most notably, Oslo police ran ‘operation homeless’ where they forcibly made known sex workers homeless in the goal of making them safer.

Bell continued: “Despite the intentions of ending violence, places such as the Republic of Ireland – which adopted this ‘sex-buyer law’ just two years ago – have seen reports of violence directed to sex worker screening and safety organisation UglyMugs.ie increase by 90 per cent, matched with a sharp decrease in willingness to engage with law enforcement.

“’Sex-Buyer laws’ remove from workers the ability to negotiate with clients, force street workers to make snap decisions without fully being able to work out if the car they are about to step into is safe, and forces sex workers into the arms of managers by still removing their ability to work together in informal collectives for their own safety.

“So-called ‘sex-buyer laws’ target sex workers and make them less safe in the workplace. Unwillingness to report to law-enforcement leads to a climate where violent men who pose as clients know they can get away with committing crimes against sex workers, and men who are willing to buy sex have to be comfortable with breaking the law in the first place.

“These would all be demonstrably bad steps for the Scottish Government to take. if it seeks to help sex workers, it has to centre the voices of sex workers, and stop pandering to the louder and better-connected voices of external pressure groups and lobbyists. Sex work is work, and only decriminalisation can provide the beginning steps towards mending the rifts that keep sex workers from reporting violence, and gives power to people who seek to abuse them.”

Following the release of the Irish figures by UglyMugs in March of this year, Scottish sex workers and sex worker charities called on the Scottish Government to consult them regarding future policy-making.