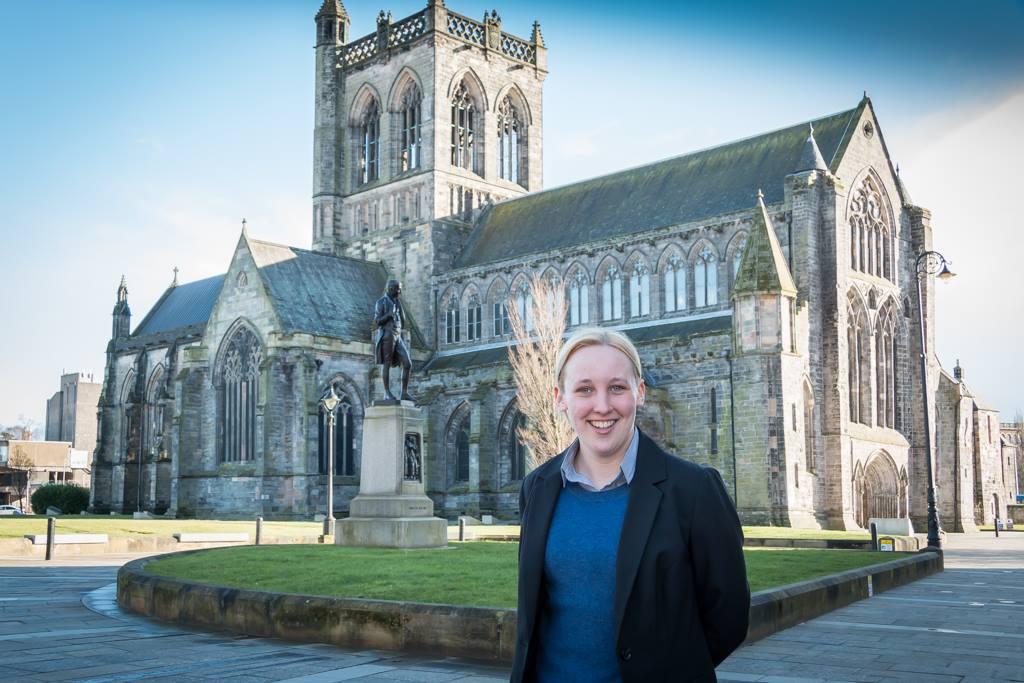 As the General Election campaign hots up, CommonSpace interviews Mhairi Black – the SNP candidate for Paisley and South Renfrewshire – on politics, her opponent and media controversies as she tries to win in a fading Labour heartland

IN Paisley – like in many central belt towns of Scotland – General Elections have passed with laborious regularity. In all 18 UK General Elections since 1945 the south of Paisley has voted Labour. But that might be about to change.

From the outside, that may appear like an impossible task. Alexander, who has held the seat for 18 years, benefits from significant backing in the UK-wide Labour party, leads the party’s campaign and aspires to become UK foreign secretary.

But Alexander’s career is far from the minds of locals on a dreich Monday night, as Black’s supporters gather to launch their campaigning drive.

When asked whether they would back a new MP, one of the teenagers huddled at a bus stop near the venue says: “Good luck to him. As long as he wants to make this shitehole less of a shitehole then they’ve got my backing.” While intuitively in favour of change, the pronoun choice suggests they weren’t expecting a 20-year-old woman from Paisley to be leading the charge.

Inside the Methodist Church hall, the SNP constituency group gathers as a congregation. Black – the straight-talking new voice of the party – is joined by former SNP deputy leader Jim Sillars, who entertains the dedicated activists and recent converts.

He describes Black as having the “potential of a perfect politician” – a mixture of honesty, principle, and compassion. “She’s no career politician,” he says.

Sillars, an independently minded former MP, met Black during the referendum campaign and invited her to join his nationwide tour of housing schemes on the ‘Margo mobile’ – a legacy for Sillars’ late wife Margo MacDonald MSP.

“The people are tired of having a Labour party that is more concerned with getting into power for the sake of power.” Mhairi Black

For Black, who is studying politics at Glasgow University, it was a learning experience, winding through Scottish towns, conversation by conversation.

Now she is in even higher demand. Speeches, videos and meet and greets over, I try to find out how she’s adjusting to her new role and responsibilities.

“I’ve never done this before,” Black states on her candidacy. “So I’m going from being an ‘ordinary person’ to having Ladbrokes tweeting me saying ‘By the way you can put a bet on – and you’re in the lead!’ It’s really exciting. Not even as a candidate – just as someone interested in politics – it’s brilliant that we don’t know what’s going to happen.

“For every General Election for 50 years we’ve known ‘Oh Labour’s getting in in Scotland’ and that’s it. End of story. But this time round – oh no. It’s the way it should be. Votes have to be earned rather than just taken for granted.”

National poll results have been strong for the SNP since the referendum, but it was the first batch of constituency polls by Lord Ashcroft that really set the heather on fire. In Paisley and Renfrewshire South it found SNP support up by 30 per cent, eight per cent ahead of Labour.

That, in the words of local MSP George Adam, kicked Alexander into action. “Douglas Alexander has discovered something new: campaigning. It’s the first time people have seen him since 1997,” he tells the hall to partisan laughter.

“Who came up with the rule that you had to be a middle aged, middle class man in a suit to be able to go to parliament.” Mhairi Black

What does Black make of her opponent? Why should people vote for her and not him?

“Quality of argument above all else,” Black states directly. She says the Labour party is now “intellectually bankrupt”.

And that’s something the folk outside at the bus stop can relate to. They wanted something different. Black certainly is different. In fact she may be the youngest MP in the history of British parliamentary democracy if she makes it. The youngest since 1832, on data available, is James Dickson, elected as a Liberal aged 21 and 67 days in 1880.

“In the first week Michael Crick (Channel4 reporter) came up because he wanted to do an interview with me as the youngest candidate.

“Once the interview was done we were just standing talking and he says ‘This is nuts! You have Mr Establishment and a 20 year old standing against him, but actually doing an alright job so far. What is going on here?’ And I was saying that this is what’s brilliant. Scotland has been shaken at its very core. Politics is exciting and it’s just been turned on its head.”

An anti-establishment, youthful reputation has pros and cons. Crick’s report reflected split views on whether 20 was ‘too young’ to be a political representative.

“Of course I can’t justify the things I said. I’m in the position where all the mistakes and daft things I said as a teenager are dragged out for the world to see.” Mhairi Black

That’s a claim Black strongly rejects. “Now that a young person is getting involved in politics in the most intense way possible, I’m being told ‘You can’t play with the big boys.’

“Who came up with the rule that you had to be a middle aged, middle class man in a suit to be able to go to parliament. That’s part of the problem,” she explains in her first campaign video.

But politics is a hard game to break into. Candidates face pressure from the public, the media, the opposition and from systems of discipline within their own party. It risks, in the view of Jim Sillars, the creation of complacent and compliant politicians who avoid controversy.

Those challenges exist as much for Black as for every prospective candidate in May’s election. Ultimately, are candidates running for the people, their party or a combination of both?

“Politicians should always be about their principles,” Black says, although she also notes that “everything I believe is already [SNP] party policy”.

In the tumultuously months ahead, the SNP leadership will be looking for as much discipline as possible from prospective members of parliament. A motion has even been put to the party’s spring conference requiring that candidates do not “publicly criticise a decision, policy or another member” of the SNP group. (Click here to read more.)

New members will walk a tightrope between the democratic culture fostered during the referendum, alongside the more rigid structure imposed by party hierarchies.

Black has already experienced how small incidents can escalate into the national press. A Labour supporting tabloid trawled through her old social media messages and spun remarks she’d made in a referendum speech. When combined with attacks from political opponents, it was a lesson in the rough and tumble of political life. Opponents demanded she was sacked. Black apologised.

“Of course I can’t justify the things I said. I’m in the position where all the mistakes and daft things I said as a teenager are dragged out for the world to see,” she explains with regret.

But the passion that set her off during the referendum doesn’t go cold when it comes to press attacks: “It’s actually quite telling that they have to go back to when I was 15/16 and take daft things I’ve said, twist them, put them out of context and then try and attack me from that angle. Doesn’t that imply that what I’m saying now has some weight to it?”, she suggests.

That is yet to be seen. With two months until the most unpredictable General Election in Scottish political history, Black has thousands of doors to knock. Her rallying calls against the injustice of austerity, the hypocrisy of the Labour party, and the stupidity of nuclear weapons may be enough to overturn decades of Labour dominance in Paisley.

In 62 days time we will know whether she’ll join a band of Scottish insurgents seeking to shake up Westminster.

Is she a threat to the political establishment?

“That’s for the voters to decide,” she says.