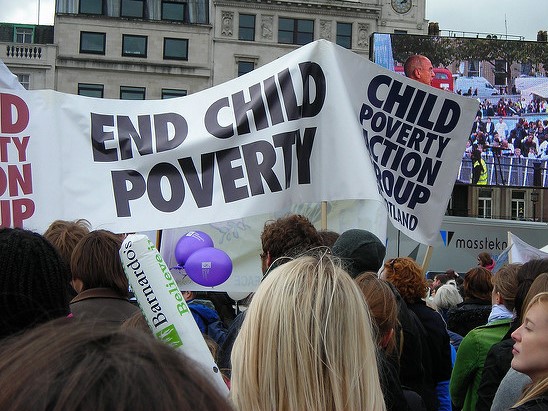 CHILD POVERTY IN THE UK will increase dramatically over the next five years due to the effects of Conservative welfare policies, according to the Institute for Fiscal Studies (IFS).

Conservative welfare policies, including the roll-out of Universal Credit, freezing benefits and the restriction of tax credits are predicted to push more than a million children across the UK into poverty, with the brunt of this falling on deprived communities.

According to new research conducted by the IFS with funding from the Joseph Rowntree Foundation, 37 per cent of UK children are expected to be living in ‘relative poverty’ – i.e., in which the household has an income less of less than 60 per cent of the UK median – after accounting for housing costs.

Should this come to pass, this would be the highest percentage of child poverty since 1961, when modern records began, according to the IFS.

Joseph Rowntree Foundation chief executive Campbell Robb commented on the new findings: “These shocking figures show the UK’s proud record of reducing child poverty is at risk of unravelling – it could mean an additional 1.2 million children in poverty by the end of the parliament.”

Other factors noted by the think tank were increasing pressure on living standards over the coming years and the weakness of income growth, which since the financial crisis of 2007-8 and the subsequent recession, have been unprecedented in recent British history.

The new research also found that the UK Government’s freeze on the majority of working-age benefits will result in roughly 7.5 million low income households having benefit entitlements cut by more than £500 per year in real terms.

“If the Government sticks to planned benefit cuts, it should not be surprised if, according to the official measure, absolute child poverty rises.” IFS representative Tom Waters

The IFS report also noted that restrictions on tax credits and the two-child limit on Universal Credit will leave many low income households with £2,500 less than they might otherwise have received.

According to the IFS, absolute poverty rates would have declined without the effect of Tory benefit reforms, but should they proceed as planned, a further 700,000 people will be forced into absolute poverty.

Tom Waters of the IFS said: “If the government sticks to planned benefit cuts, it should not be surprised if, according to the official measure, absolute child poverty rises.”

A recent Gingerbread report warned that approximately 165,000 single parents could be forced into finding work or else have their benefits sanctioned, despite this constituting what the charity calls “an impossible bind”, as parents are being asked to “achieve the impossible” due to childcare costs and the lack of flexible part-time employment.

Gingerbread has called on the UK Government to suspend jobseeking requirements on single parents under Universal Credit.

Picture courtesy of Need NOT Greed