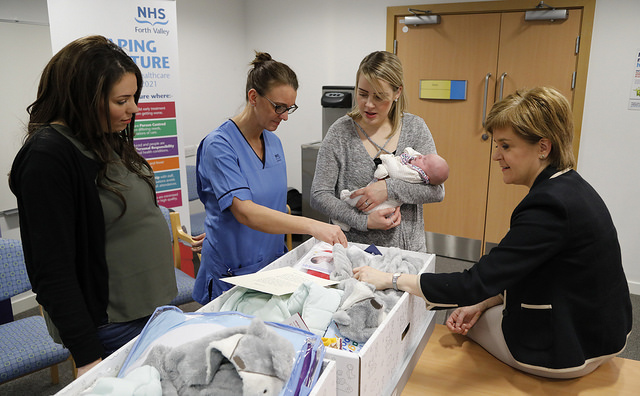 Aiming to promote an equal start for all children, the box includes clothes, nappies, baby care items, a blanket, a mattress and a play mat

CHILDREN’S charities have welcomed the roll out of a ‘baby box’ scheme in Scotland which will see every child born in the country entitled to receive a collection of essential items for a newborn.

Today’s roll-out is inspired by a similar scheme which originated in Finland in 1938, and follows a three month pilot in Clackmannanshire and Orkney earlier this year.

The baby box will be available to all newborns, although expectant parents must register with their midwives first. The box, which contains a mattress and blankets and can be used as a bed, will feature a range of essential items including clothes, books, nappies, a comforter toy, thermometers, maternity towels and nursing pads.

The scheme has attracted the support of Scottish children’s charities. Home Start director in Scotland Shelagh Young told CommonSpace that the organisation “strongly supports” the baby box: ”It’s a really powerful message to show that each and every child and family matters,” she said.

“We hope that as parents open the box, this also opens the door to a suite of services, opportunities and support available to them as they step into parenthood.” Jean Carwood-Edwards, Early Years Scotland

Young explained that this could be especially important for families on low incomes or in demanding work, which can make it difficult for them to do everything they’d like to as parents.

Critics have pointed to the cost of the scheme, estimated at up to £8m per year, a lack of evidence that the scheme will reduce infant mortality, and an absence of sufficient health and parenting advice within the box.

But responding to some of the criticisms which have been made of the scheme, Shelagh Young added that Home Start was “confident that the views of parents who recieved the box in the pilot have been listened to”, in keeping with its own position of being family focused.

“We hope that as parents open the box, this also opens the door to a suite of services, opportunities and support available to them as they step into parenthood.”

The pilot, which took place from January to March 2017, found that parents and health workers were generally positive about the aims of the scheme, although there were differences of opinion about making it universal. The scheme works on an opt-in basis for parents, and around 85 per cent took up the offer of the baby box during the pilot period.

“As the box becomes available to all babies we will continue to engage with parents and healthcare professionals and look for ways we can further improve this fantastic initiative.” Mark McDonald, Scottish Government

Minister for Childcare and Early Years Mark McDonald said: “The feedback we have had from the baby box pilot has been extremely useful in our planning for nationwide delivery.

“It is great to see that the pilot findings confirm parents were generally extremely positive about the quality and range of the contents of the baby box.

“As the box becomes available to all babies born in Scotland we will of course continue to engage with parents and healthcare professionals and look for ways we can further improve this fantastic initiative.”

Scottish Labour, which is generally supportive of the scheme, has suggested that the boxes should also include breastfeeding aids, in light of low rates of breastfeeding in Scotland and the links between early nutrition and future health outcomes.