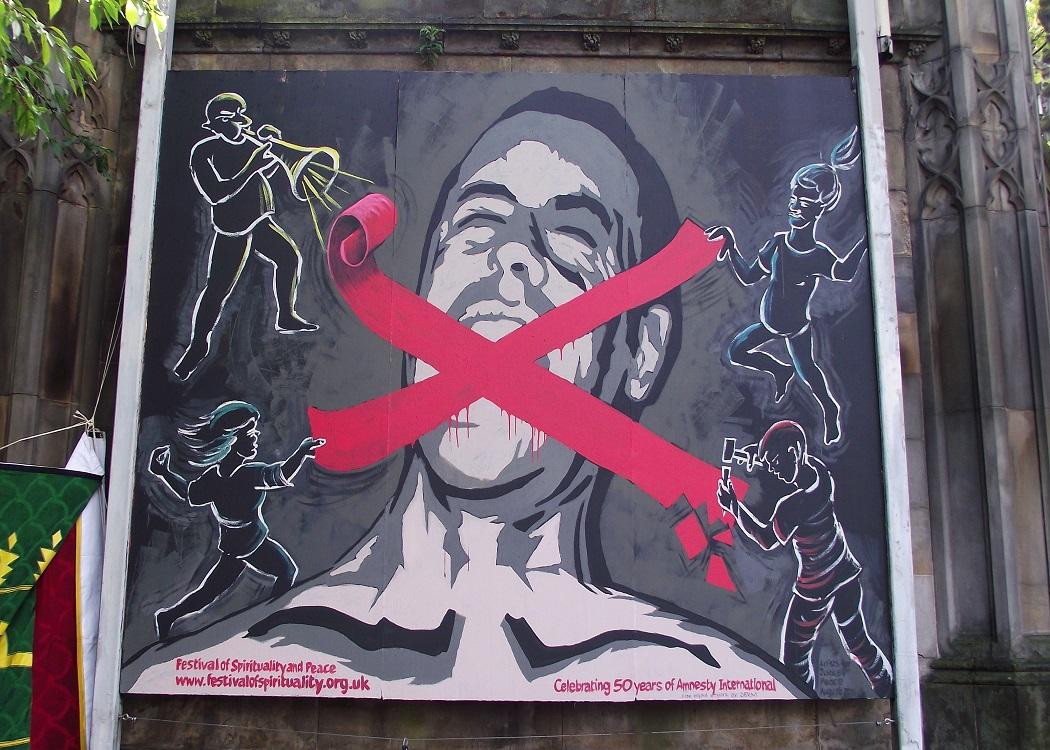 HOPE NOT FEAR – a worthy mantra. Hopeful? Good, but folk should be feart about the next fortnight, yet alone the prospect of another five years of harrowing Tory misrule. Once again we shall plough a progressive furrow under the yoke of a UK Government which has no mandate to govern Scotland.

The Queen’s speech on 27 May will herald a policy offensive of offensive policies, a concerted ideological attack. Prepare to tread on eggshells over a neo-liberal minefield, because the proposal to abolish the Human Rights of Act is but one harbinger of foul legislation to come.

A majority Government in the UK, the Tories can legislate all kinds of barely-concealed shite, shot now of those pesky Lib Dems.

The proposal to abolish the Human Rights of Act is but one harbinger of foul legislation to come.

Expect years of turbulence as we reach many a deadlock combating a UK Government programme cloaked in triumphalism at present, but always driven by an underlying imperative – the maintenance, promotion and furtherance of conservative hegemony.

Ratification of the ECHR may be essential for EU membership but, like other signatories and laws, cherry-picking the parts to enact determines the reality of its execution.

Proposing to repeal the HRA will provoke constitutional conflict with Scotland, Wales, Northern Ireland and the EU in Brussels and could be portrayed, construed and explained as mischievous appeasement, pandering to backbenchers lest they become backstabbers too early for comfort. Or ill-conceived inflammatory actions in the hubris of victory.

In reality the repeal is about marginalising and creating a bottom tier of British citizens and further restricting immigration – what the proposed Bill of Rights and other legislation aims in effect to achieve. Tory policy on the HRA – and non-acceptance of migrants from Africa and Myanmar, for example – reeks of a narrow nationalism, if not blatant racism.

Calculated calls for Britain to take its full 60,000 share of refugees highlight the yawning chasm in thinking between the fresh intake of SNP MPs who are making or backing such demands, and a UK Government hell-bent on hiding behind manifesto claims that replacing the HRA with a British Bill of Rights will change nothing.

In reality the repeal is about marginalising and creating a bottom tier of British citizens and further restricting immigration.

If that’s true, why propose doing it? VE Day wasn’t celebrated by re-enacting the Blitz; why mark 800 years of the Magna Carta by destroying freedoms for which we have fought hard over the centuries?

Note to UK Prime Minister David Cameron – fire Magna Carta into Google, since you didn’t seem to know when it was signed or what it even was when you were interviewed on the subject last year. While you’re in touch with Google, do something worthy and get it to put its tax affairs in order.

It is not far-fetched to consider laws proposed to thwart radicalisation as a threat to the right to oppose and protest against, for example, another illegal adventurist war in the future, or even for such legislation to be used to counter us subversive Scots.

After all, we voted for a ‘radical’ alternative – end austerity measures and fight to halt the forthcoming PS12bn cuts. The UK Government courts and represents the bankers, big business, Ukip voters and the Daily Mail ‘readership’, not to mention old friends in the Countryside Alliance.

Alternatively, all 56 SNP MPs could clear their desks, pack their bags and return to Scotland, citing as the reason: “We cannot abide a workplace where so many want to repeal the Hunting Act 2004.”

As red line issues come and go, nobody would be expecting that as a reason for declaring constructive (if not de facto) independence. Neither do I expect such hypocritical reactions. Many Scots voters would oppose a boycott of Westminster and maybe ‘do a Labour wipeout’ on the SNP at the Holyrood Scottish Parliament elections in 2016.

Abolition of the ban wouldn’t apply in Scotland where hunting with dogs was outlawed in 2002, two years earlier than in England and Wales. Traditionally, SNP MPs have refrained from voting at Westminster on matters which do not have budgetary or legislative implications.

It is not far-fetched to consider laws proposed to thwart radicalisation could be used to counter us subversive Scots.

To stretch the ‘hen and fox’ metaphors, beyond patience to exasperation probably, it would be ruffling not just a few feathers to vote or walk out of Parliament over repeal of the ban, more a case of hens coming home to roost and getting their heads torn off by fickle foxes lying in wait.

Anti-strike trade union laws and a Westminster veto on devolved welfare benefits loom. Watering down the Smith Commission ‘recommendations’ and non-implementation of ‘the Vow’ beckon.

The next provocation may be scheduling the EU referendum across the UK in May 2016 when Scottish Parliament elections for Holyrood are due.

Representation and MSP leadership, when subjects particular to Scotland like fishing are due to be debated, must be negotiated, likewise income tax rates and a share of VAT for Scotland. There must be a guarantee – for what it’s worth – that Holyrood cannot be dissolved.

This is by no means a Parliamentary struggle: it doesn’t have to be a defensive fight. Nor is it a time for transitional demands or doing nothing, because ‘those suffering will revolt of necessity’. Sitting back and allowing the vulnerable to struggle even more is the worst kind of economism.

For every revolutionary, there are so many reformists, opportunists, centrists, professional politicians, men who should have been civil servants, wannabe Lords and craven careerists.

The response from the 56 SNP MPs at Westminster will be examined and put to test when dealing with the monarchy, Nato, Palestine, banking, big business, the Living Wage and trade union issues.

We need common sense and strong ideologies to combat their falsehoods. Unite, rally, agitate, strike and scream; make sure your voices are heard.

What about an unequivocal outright ban on fracking and unco gas exploration, strident opposition to the Transatlantic Trade and Investment Partnership (TTIP), and promotion of sensible anti-austerity measures, like the need to raise Income and Corporation Tax rates to finance infrastructure and public works projects, to invest in their progressive programme?

Their agreement with the STUC was a development in a welcome direction. No more grandstanding to the likes of Trump at Menie, Ratcliffe at Ineos, that ilk. Pick suitable bedfellows.

Build a broad-based opposition. Educate, we need common sense and strong ideologies to combat their falsehoods. Unite, rally, agitate, strike and scream; make sure your voices are heard.

‘End reliance on food banks: make the bankers squeal. No to austerity. And scrap Trident, not the Human Rights Act!’