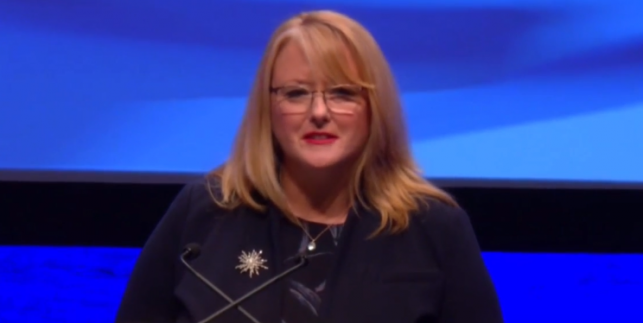 SNP MSP CHRISTINA MCKELVIE has launched a motion in the Scottish Parliament, calling on the international community “to recognise the vote of the Catalan Parliament for an Independent Republic of Catalonia”.

The motion goes on the say that the Scottish Parliament believes: “The EU, Council of Europe and all other European institutions, as well as the wider international community, have a critical role in ensuring a peaceful, diplomatic and transparent transition of power from Spain to Catalonia, and calls for peace and dialogue between the Spanish and Catalan governments, upholding human rights, democracy and what it believes is the fundamental right to self-determination.”

McKelvie has been one of the most outspoken Scottish politicians on the subject of Catalonia, which on Friday, 27 October, declared a Catalan republic in fulfilment of the disputed 1 October independence referendum. The Spanish Government has responded to the plebiscite by activating Article 155 of the Spanish Constitution, imposing direct rule over the previously semi-autonomous region and dissolving the Catalan Government.

Speaking to CommonSpace, McKelvie was asked how she saw her motion and other diplomatic efforts via the Council of Europe within the context of the wider Scottish solidarity movement with the Catalan Republic.

“’It doesn’t matter if we have elections and you stand, but if it’s indy parties that win, we’ll just invoke Article 155 again.’ That’s not a democracy, that’s tyranny.” SNP MSP Christina McKelvie

McKelvie answered: “I would hope the motion would be a reflection of that solidarity effort. Obviously, I was contacted by lots of people – and some constituents as well – who were incredibly worried about the scenes they had witnessed in Catalonia on referendum day, the 1 October. The follow-up from the Spanish Government seemed to be getting each day more extreme, with more threats.

“I’m a member of the Council of Europe’s Current Affairs Committee, which looks at human rights, and for me that started to register some alarm bells. ‘It doesn’t matter if we have elections and you stand, but if it’s indy parties that win, we’ll just invoke Article 155 again.’ That’s not a democracy, that’s tyranny.

“So I would hope the motion would reflect the position of the people of Scotland that actually we should use peace, we should use dialogue, and overall we should uphold the rights of a people to self-determine.”

Asked if she hoped that any recognition of the Catalan Republic by the international community would include the Scottish Government, McKelvie said: “The biggest issue is this argument around about whether UDI is legitimate or not. Now, in the European community right now – whether it’s the 28 member-states, or the 47 members of the Council of Europe – many of them have used that method in order to assert their national sovereignty. So that’s why I’m asking our parliament to recognise that as a right.

“Whether that then transcends to different governments recognising that right, I hope that it would. But that has to be collective, and that’s why it’s the international community – it can’t just be one stand-alone position, although that would be a good start, and if that’s the Scottish Government that would be great.”

McKelvie also argued: “For all intents and purposes, Catalonia is a part of the European Union as it stands now. There is no method to chuck them out, so that would need to go through a process. They still have the same rights and protections as any European citizen, and that’s why the European Union, the Council of Europe and the [European] Commission should all stand up for democracy and peace.

“It can’t just be about the legality, because I think that’s not an issue anymore. It’s about the right of a people to assert themselves.” SNP MSP Christina McKelvie

“That then leads on to where the UN comes in on this, and you’ll see from the letters I’ve written to the Council of Europe where I’ve quoted the UN expert on the right to self-determination, where he feels Spain has stepped over the line on this, and where he thinks the international community should step in.

“That’s the key to all this; it can’t just be about the legality, because I think that’s not an issue anymore. It’s about the right of a people to assert themselves, and each nation sitting around that table has, at one point or another, used that right in order to assert themselves and they should be recognising that.

“There’s precedent for this, many precedents. The most recent one is it took the European Union and its institutions 12 days to recognise Kosovo when it succeeded in its referendum, which was deemed illegal at the time,” SNP MSP Christina McKelvie

When asked how optimistic she was that international pressure might bring about a change in the EU’s position, given the EU’s lack of intervention in the crisis thus far and Donald Tusk’s tweet in response to the proclamation of the Catalan Republic that “Spain remains our only interlocutor”, McKelvie answered: “I’m always optimistic when it comes to putting pressure on organisations to change their view.

“There’s precedent for this, many precedents. The most recent one is it took the European Union and its institutions 12 days to recognise Kosovo when it succeeded in its referendum, which was deemed illegal at the time, because it was against the Serbian constitution – very, very similar circumstances.

“So I remain optimistic, but not silent. That’s what my letter’s doing, and that won’t be the end of it – if I don’t get a decent response to that letter, then I’ll go further, so I would be taking this back to the next plenary [of the Council of the Europe], as we did at the last plenary just a couple of weeks ago.”

“I’m not very optimistic Boris would ever do the right thing in the right circumstances at any point.” SNP MSP Christina McKelvie

Asked if she had any hope that the UK Government, which has so far backed the Spanish Government, might changed its position, McKelvie was less positive. “Well, it’s Boris we’re talking about,” she said. “So I have to say, although my hope springs eternal and I’m a very optimistic person, I’m not very optimistic Boris would ever do the right thing in the right circumstances at any point, so I’m pretty negative about that.”

“For my own part and some of my colleagues, who are very supportive and involved in the Catalan situation, I’ve been in daily contact with some my friends who are there, who are activists and journalists and parliamentarians. And I’ve been in contact with some of my colleague across the Council in Europe area as well, who had stood in the debate on Catalonia in Strasbourg just two weeks ago to raise their concerns. So, there’s a group of us talking, in order to get the most up-to-date information, because it’s changing all the time.”

Given that foreign policy is a reserved matter, CommonSpace asked McKelvie whether she felt that – short of independence, under which Scotland would formulate its own foreign policy – the Scottish Parliament and Government should have more power to articulate itself on international affairs, McKelvie said: “Absolutely.

“The point of any politician, no matter where you’re elected and how much power you’ve got, when you see human rights abuses anywhere of the world, you have to stand up and speak. Because if you don’t, we get into some of the dark scenarios that we’ve seen across Europe over the last 100 years. If people don’t stand up and speak out, then we can’t stop some of the horrible stuff we did see on the 1 October.”