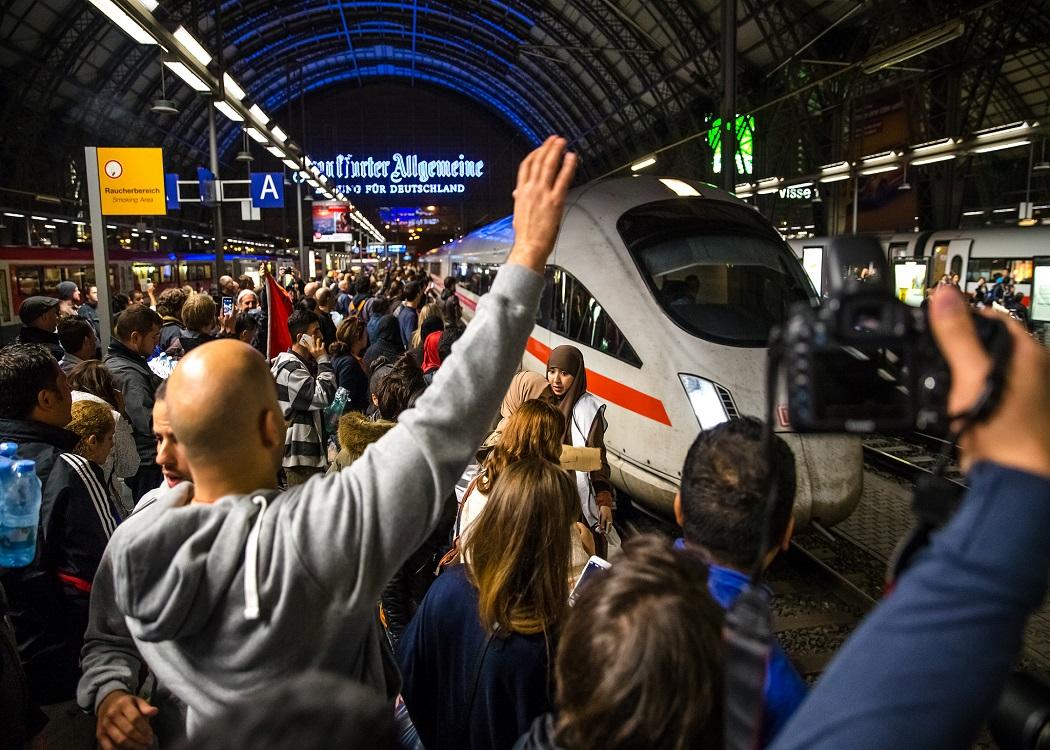 Christina Neuwirth, a project officer at Scottish PEN, recounts her time at Hauptbahnhof, Vienna, with the ‘Train of Hope’ refugee organisation

A POLICE officer turns to me and says: “Make sure you get as many people as possible on this train. The situation can change overnight. You never know what the politicians might decide tomorrow.”

It’s 5pm, Saturday, 5th of September. I am sitting in Vienna Hauptbahnhof, at the improvised headquarters of Train of Hope, a voluntary refugee aid organisation.

The tables are the foldable kind you use for garden parties. There are eight, no, about 10, laptops on the table, people are tweeting, facebooking, phoning, emailing. Calling in favours. Making lists. Walkie-talkies buzz every minute or so with updates from elsewhere in the station.

The train station only has a bathroom with sinks, there are no showers available here, so one of the volunteers coordinates the many local people who have opened their homes and offer showers to refugees.

“We need toothbrushes,” says the warehouse manager. Of course, the warehouse is just another room in the belly of the station, just like the headquarters. There is one tap, kettles are constantly being boiled and emptied to ensure the 500 refugees can get teas and coffees.

Cables are everywhere, and there are eight phones charging on the table. I don’t know whose they are – a lot of the refugees are coming in looking for places to charge their phones with their new SIM cards, courtesy of the kind donors.

On the previous day, my boyfriend and I helped out for a little while, too. 7am start. We are told, in whispered voices, that people will be getting up for breakfast soon. Camp beds are stretched out along the long corridor and in the room adjacent to the headquarters.

I stick my name tag to my shirt and start arranging bananas. The first people wake up. The other volunteers and I soon learn the Arabic words for “tea” and “milk”, and for sugar we point at the sugar cubes and gesture that everyone may help themselves to as much as they want.

A boy and his father come up to me and ask for a cup of hot milk. We don’t have a microwave, but there’s no time to explain with a growing queue, so I mix hot water and UHT milk. There is fruit, bread, spreads, and other tables around me holding sanitary products for men and women, and baby food, nappies, bottles and creams.

On Saturday morning at 4am, a group of refugees arrive soaking wet from the rain. They have walked through the night, on foot, from Budapest to Austria. Volunteers offer to clean and dry their clothes in their own homes.

I don’t know it yet, but the big pile of clothes behind me, neatly sorted into ladies’, men’s and kids’, will give way to an organised shelving system for food the next day when donations reach a new high and more structure is needed.

For now, jackets, bags, socks and underwear are stacked neatly. Every now and then, someone comes up asking for a specific item. A baseball hat. A razor. A backpack. If we need something specific, we can tell the social media team and they tweet it out, and then people come and help.

A train ride to Munich is arranged. Through donations in person – online crowdfunding and bank accounts have since been set up, but they weren’t then – the volunteers were able to buy a group ticket for 60 refugees.

Three other volunteers and I frantically try to finish stuffing paper bags with bananas, bread, juice boxes, muesli bars and apples before the refugees have to go upstairs to catch their train to Germany.

One of the refugees is a man who could’ve been on a train the previous day, but he chose to stay, to help, to translate. He is now among the people who are getting on the train. He helps us distribute the lunch packs. Finally, it is time for the 60 people to go.

We wave, and I want to cry with something like relief. I know they’ve come so far already, but I also know their journeys are far from over.

We wave, and I want to cry with something like relief. I know they’ve come so far already, but I also know their journeys are far from over.

The train station only has a bathroom with sinks, there are no showers available here, so one of the volunteers coordinates the many local people who have opened their homes and offer showers to refugees.

On Saturday morning at 4am, a group of refugees arrive soaking wet from the rain. They have walked through the night, on foot, from Budapest to Austria. Volunteers offer to clean and dry their clothes in their own homes.

One of the refugees, a woman with two children, tells me she walked 50km. She approaches me while I’m at the social media headquarters. I am scrolling through the Twitter feed of the hashtag #walkofhope, and she spots a picture. She says: “That’s me.”

She explains that she walked 50km until a bus picked her and her two children, a boy and a girl, up. She says that they are going to Stockholm, where her husband is waiting for them. She tells me that she did a TV interview in Budapest, and we search for it online – not a chance of finding it, there are too many reports.

She keeps saying: “That’s me.”

“And now you’re here,” I say. We look at each other. She points at her legs and says that they are hurting. Her kids sit outside in the sun.

Knowing that people are out there, doing the work that’s needed, helping without discriminating, gives me hope that we’re going to be okay.

They are desperate to do something about the humanitarian crisis on their doorstep, and help where they can. Like the police officer said on my departure, we can’t tell what’s around the corner. All we can do is help right now.

From a group of people handing out food, they’ve grown and grown. Now, I’m told they’ve even had a donation of an actual ultrasound machine for their clinic. Even on the two days I was there, the organisation grew and evolved: translators for Urdu, Arabic and Farsi volunteered and were put on a list while lawyers showed up to help with the legal side of the asylum application process.

And that’s not even scratching the surface – I was only there for two days, after all. All these people have come together, there’s a constant stream of volunteers, of donations, of queries for how people can help.

I was there just over two weeks ago, and already the situation has changed dramatically. None of us can tell how things might progress. In the face of a crisis, surrounded by media reports showing people at their worst, we’re all desparate for a glimpse of hope and humanity.

Knowing that people are out there, doing the work that’s needed, helping without discriminating, gives me hope that we’re going to be okay. That even if governments are failing to do the right thing, ordinary people will step up to the plate.

You can find Train of Hope on their website: www.trainofhope.at