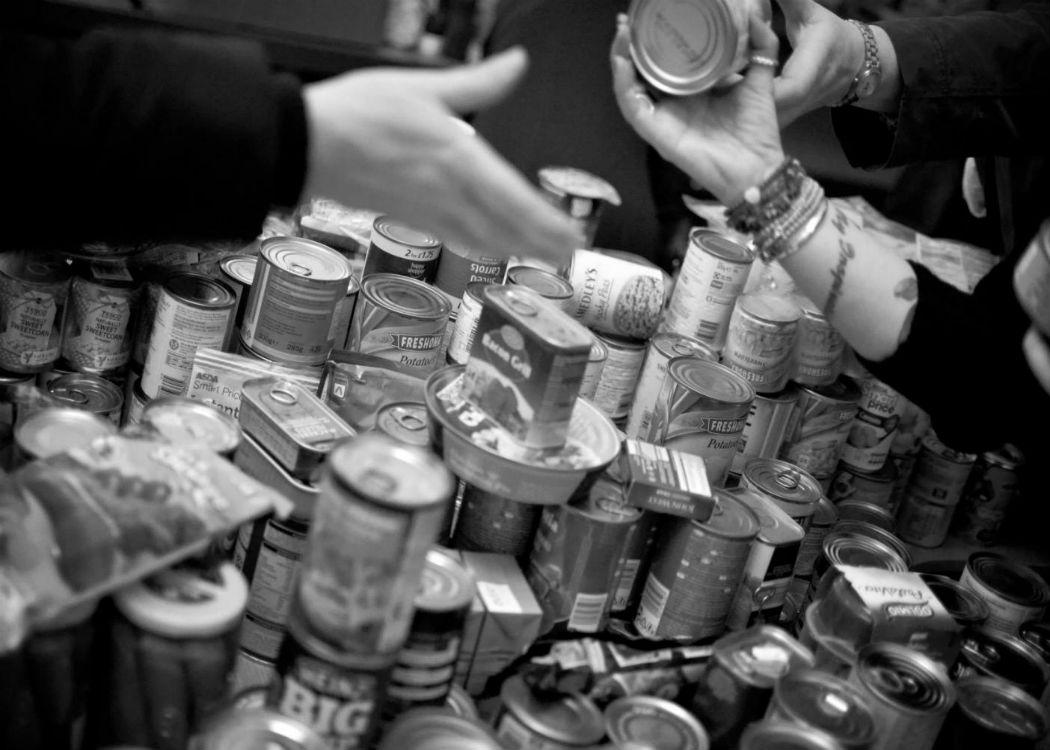 It wasn’t difficult to find the The Rucksack Project in the Gorbals. Commercial Street was a flurry of warmly wrapped figures moving backpacks, holdalls, bin bags and suitcases from car boot to new home, each unloading their car like a philanthropic, winter Mary Poppins. No fuss, no complaints, just getting a much-needed job done.

The Gorbals Legal Aid Centre was packed on the frosty Sunday afternoon of 7 December with around a hundred volunteers, all sorting and storing more than 8,000 donated bags filled with life-saving goods for the homeless in Scotland: sleeping bags, warm coats, woolens, toiletries and food. Towering piles of bags filled every room of the centre, as truckloads of donations were regularly dropped off.

One man noticed the activity from his bedroom window, and after realising its purpose donated bags of his own belongings to the cause. His own brother had recently died of hypothermia while sleeping rough, and he knew the critical role of a warm sleeping bag.

The Christmas holidays provide an opportunity to spend time with loved ones and families, whether celebrating religiously or not. But for the destitute and vulnerable in society, the combination of colder weather and consumer pressure can make it the most difficult time of the year. On Christmas day, Shelter predicts that 4,847 children will be homeless in Scotland, and the most recent figures from The Campaign to End Child Poverty show that Scotland has one in five children in poverty, with Glasgow City having the highest rate of one in three.

In Glasgow alone, many volunteer initiatives set up by regular people are seeking to remediate the pressure on society’s most vulnerable during the festive period. The Rucksack Project is one such initiative, set up by organiser Lorna McLean in 2013 and run with support from the Simon Community, the Marie Trust, Lodging House Mission, The Invisibles, City House Mission and Destiny Angels.

The Rucksack Project began in 2009 in Bristol when web/graphic designer Matthew White interrupted his Christmas shopping to give a rucksack with lifesaving goods like a sleeping bag and warm socks to a homeless man. Thanks to social media, the idea snowballed into its current form: events across the UK in around 50 different locations. In 2013, the Project collected at least 10,000 bags, with 4,000 being collected in one day in Glasgow alone, making it the biggest Rucksack Project event.

The Glasgow figures have already doubled in 2014, with more people volunteering their resources and time to contribute to the cause, including SNP Councillor Will Mylet – recently suspended for burning the Smith Commission report – making it the biggest collection of its kind this year in the UK. Organiser McLean says the event appealed to her because of its inclusive and simple nature.

“Anybody can set this up and everybody can give,” she says, adding that she was “overwhelmed” by the public response to the collection, which had people travel in from as far as Glencoe, Fife and the Borders.

Rachael McLean, Lorna’s daughter who works for cancer charity CLIC Sargent, also volunteered throughout the day. She said it was “uplifting” to see ordinary people organise themselves with a smile on their faces but “devastating” that an event like this must be held at all.

On the other side of the city, similar frustrations bubble under the surface of an enthusiastic group of volunteers and staff in the Greater Maryhill Foodbank.

During the Christmas period, the GMF is working tirelessly to meet the needs of service users, while also providing educational presentations and christmas gifts to school pupils in the Greater Glasgow area, organising multiple Christmas celebrations in collaboration with the Trussell Trust, beginning a volunteer training program for local asylum seekers and seeking ways to provide help with gas and electricity.

Edging through the door of the foodbank, there is barely space to place your feet as the team works efficiently to sort the many bundles of food and Christmas present donations from generous Glaswegians.

Staff member Linda McConnell recounts some of the more difficult scenarios facing the team this winter, with emergency collections at a high. Since October, around 2,500 single users and families have been helped by GMF. And the foodbank provides more than food; many users require more substantial welfare support and advice.

A year sober, one service user had her benefits instantly repealed after it was discovered that an administrative error enabled her to collect more than the system entitled her to. Despite having never claimed the extra money, and not even being aware of the Department of Work and Pensions’ error, she was left without income and under suspicion of fraud.

Upon seeking help from Glasgow Housing Association and a Welfare Rights Officer, she was told to come back in the third week of January when they would have time to deal with her inquiry as they were understaffed.

Understanding that this would leave the woman hungry, cold and possibly homeless by the time her issue was dealt with, the staff at GMF challenged this assertion and spent time ensuring that the errors would be corrected and her welfare reinstated.

This is not a unique story for the staff at GMF: “We are not only staff here, we also have to be support workers,” says McConnell.

The understaffing and lack of support from public services mean that many of the service users turn to GMF when in need, particularly concerning welfare reform. What echoes throughout the multitude of personal anecdotes is disappointment: the local community must rely on GMF’s services because the state does not adequately support them.

The all-party parliamentary Inquiry into Hunger in the United Kingdom, Feeding Britain, was released on 8 December and examined the continued reliance on foodbanks and other volunteer initiatives to meet the needs of the poor.

Commenting on the report’s release that day, Social Justice Secretary Alex Neil said: “It is unacceptable that anyone should experience food poverty in a country as wealthy as Scotland. This parliamentary inquiry has found that UK families on low incomes ‘have been hit disproportionately hard’ by rising living costs… Efforts to tackle economic inequalities in Scotland are being made in the face of a welfare reform programme that is estimated to remove PS6bn from Scotland’s economy in the six years to 2015-16.”

Data from the Trussell Trust shows that numbers using three days’ worth of food from foodbanks in Scotland rose astronomically from 5,726 in 2011 to 71,428 in 2013-14. In August 2014, Common Weal published a report by Nourish Scotland executive director Pete Ritchie which challenged the institutionalising of foodbanks in society, using the example of Canada as a state that views foodbanks as a quick fix, but which is now finding it impossible to shake the reliance on the volunteer service. Scotland has 423 food banks.

In response to the cross-party report from Westminster, Richie said on 8 December: “It is vital that we question the concept of ‘food poverty’. The issue is simply poverty. Focusing on recycling food waste, and feeding surplus people surplus food, scandalous though the levels of waste in our food system are, completely misses the point”.

Nourish Scotland urged Westminster to tackle the issues not with surplus food but by tackling poverty and increasing social security payments and the minimum wage. Similarly, Shelter Scotland’s recent Smith Commission submission urged the Commission to address the need for comprehensive welfare control with a fully devolved social security system and matching fiscal and economic powers in Scotland in order to tackle homelessness and poverty as issues with shifting demands which could not depend on a fixed funding base.

Ritchie continued: “Here in Scotland we can at least ensure that we move beyond the desperate, disastrous idea that the best we can do is force poor people to depend on charity for their long-term survival.”

But at this time of year, it is clear that for the vulnerable population in Glasgow and Scotland, these charities and volunteer initiatives become a vital lifeline when welfare reform and further austerity measures fail to address poverty.