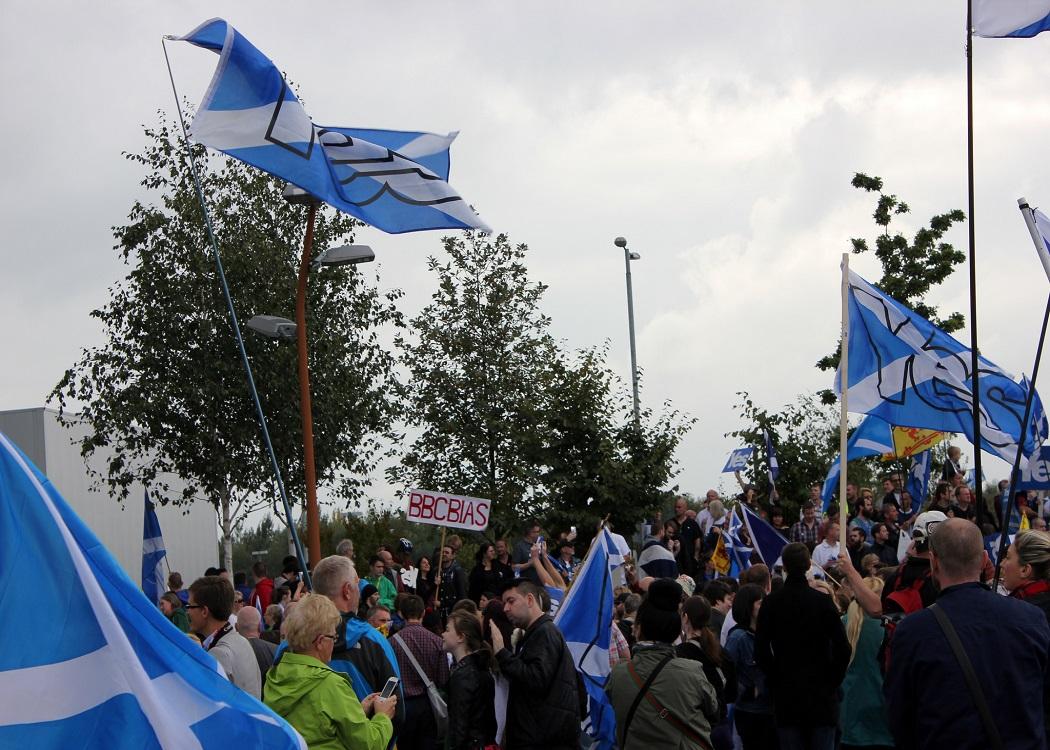 Christopher Silver is currently writing a book, The Case for a Scottish Media, you can support this project here

SCOTLAND’S media is in crisis. This crisis is taking place on a number of levels and the symptoms are manifold. They include systemic declines in staff numbers and newspaper circulation, a crisis of legitimacy at the BBC, acutely damaging managerial cultures intent on doing ‘more with less’ and the formation of ‘old’ and ‘new’ media echo chambers.

But this crisis is not simply a Scottish ailment: while issues that are particular to Scotland remain profoundly significant, our crisis is hardly unique. For old hacks and young graduates alike the future does not look promising. In large part, the rapid development of media technology is at the root of the problem.

Certainly, globally, as in Scotland, new media has played an important role in disseminating alternative views. Technology has been pivotal in unlocking access to countless new platforms and has granted access to ever greater levels of information. But as Jon Snow so eloquently puts it, its effect is also deeply problematic.

For old hacks and young graduates alike the future does not look promising.

Technology has given us the global village of images ready to weave into as comprehensive an account as mankind has ever known. We have invested in technology. But we have neglected the human. We have danced to the music of endless pictorial options. We have dispatched willing writers to editing devices to wax poetic about scenes they have often seen but rarely, if ever, witnessed.

Unpacking such problems is a complex task. Even the word media in itself is a difficult starting point. Grammatically it’s the plural of medium, but in modern usage the term refers to the content and structure of the medium too. In our global society, this small word refers to a vast array of organisations, professions, behaviours, products, services and marketplaces.

As society has developed and become more complex and interconnected, the range, variety and aims of media have exploded. As if that wasn’t confusing enough: in the information age, everything is refracted, from the vast and cosmic to the intimate and personal, through some form of media lens. As individuals we act, we transmit, we publish, we share, we broadcast.

Manuel Castells calls this ‘mass self-communication’ a useful term for the vast changes that have occurred through the emergence of digital technology in recent decades. Increasingly people behave like tiny media organisations, and often carry out, for free, functions that were once professional activities. Commenting, reporting, discussing and witnessing.

All too often, this mass proliferation of media jams our ability to comprehend what is actually going on. It becomes mere noise. But somewhere in between Uncle Bill’s new onesie and the workings of the Hadron Collider, we receive a residual summary of what is actually happening elsewhere. We call this news. Some of us still like it a day old in all its black and white printed certainty.

Advertisers only care who serves their product to the biggest audience and as a result vehicles for journalism are increasingly called upon to innovate.

Defining what that approximate impression, papery or otherwise, consists of, is a massively important task. We glorify it, we demonise it, because as a profoundly significant act it can demonstrate both the most noble and the most despicable forms of human behaviour. Some hack dead people’s phones for gossip, others sacrifice their lives in order to help us understand the awfulness of human suffering that is happening now. Both get lumped together within a trade that we call journalism.

Journalism and the industries that support it are not in good shape at the moment. The trade of deciding what is current has become lost in a throng of hawkers competing for our attention in the global media village. Vast and shiny new miracle workers (like Google) are taking its livelihood, while rarely attempting to adopt its lofty aims and weighty responsibilities.

The internet giants are becoming an ever more dominant part of the media mix, but they don’t dispatch teams in flak jackets to cover conflict zones, or sit through the tedium of party conferences and international summits. Overwhelmingly those tasks still fall to state broadcasters and old media corporations.

Meanwhile, advertisers only care who serves their product to the biggest audience and as a result vehicles for journalism are increasingly called upon to innovate. They’re asked to do so as PR experts and spin-doctors exert ever more pressure on a smaller and smaller group of professional news gatherers. Increasingly it is the former group: those who are paid to turn a private agenda into a matter of public interest, that define what is delivered to us as news.

Faced with a constant barrage of pre-packaged stories, the working lives of journalists are increasingly spent in centralised offices: factory farms in which only the exceptionally lucky or talented are allowed to roam in the real world.

At its root, media and the role it plays in our society is not about a vast conspiracy to shape an audience’s views, nor is it a neutral vessel that simply acts as a conduit for information.

Of course, there is no ‘golden age’ to hark back to here. Journalism has long been seen as a grubby, boozy, malicious trade, while elites and vested interests have been attempting to coerce it for centuries. There is, however, a basic truth about the media that should be remembered in the Scottish context.

t its root, media and the role it plays in our society is not about a vast conspiracy to shape an audience’s views, nor is it a neutral vessel that simply acts as a conduit for information (though it is capable of doing both). Rather, media is about representation. A kind of ongoing, multi-layered process of filtering and selection that makes its way to us in a variety of forms with the aim of representing what is actually happening.

This is where media becomes politicised: the question of who selects what, and for whom, is critical. News has to be filtered, that’s a basic reality that we have to accept, but at a time when information is the basic commodity of our age, we have to develop an ever stronger awareness of how that process works. This is the outline of coming struggles everywhere: to make information more transparent and to liberate it from the straightjacket of private, commercial funding models that are crumbling all around us.

So here’s the problem for Scotland. Its media landscape is bleak. Once proud titles like The Scotsman are becoming ever more squeezed and even start ups like The National are expected to run on a shoestring. Neither BBC Scotland, nor STV, are equipped, or indeed willing, to take on the role of a national broadcaster: they exist in a quasi-regional no-man’s land.

Trapped between the rapid pace at which Scottish politics has moved in recent years and a mantra that it’s all just ‘business as usual’, Scottish broadcasting is suffocated by a deeply embedded provincial, managerialist, culture. There are a host of new media initiatives challenging this, all of which are run on minuscule resources and are largely funded through donations.

Much of their content is created on a voluntary basis and their heyday during the referendum was a definitive part of envisioning a new Scotland. The more awkward question that follows on from that is how much the massive collective good-will that sustained pro-independence media can be maintained. But even that important question forgets that vast, structural, change is needed to restore vitality to the media in Scotland and to upgrade it.

Outrage and resultant protests at media during indyref would focus on the agenda of particular journalists, forgetting the deep structural issues at play.

This has to be carried out on a non-partisan basis. All of Scottish society needs a renewed media culture in which genuine dialogue and innovation can take place. This is not just an issue for those who want Scotland to be a nation state, the question is far more acute that that, it’s an issue that must be addressed by all who want to secure Scotland’s long term ability to function as a modern democracy.

There’s no simple solution here (though in the process of my work on The Case for a Scottish Media, I hope to identify several strategies for change). But there is perhaps one obvious lesson that our recent history demonstrates. Namely, the need for a vocal campaign with a set of concrete demands. The biggest anomaly about post-devolution Scotland is that just as the Scottish Parliament was signalling a genuine sense of democratic renewal, one of the most vital elements in a democracy: a vigorous, multi-channel media, would see its prestige rapidly erode.
BBC Radio Scotland, award-winning and widely respected for its current affairs output in the 1990s, was described by Tom Devine in 2012 as a ‘national disgrace’. While a whole new arena of representation was taking form at Holyrood, ‘more with less’ managerialism and commercial decline would savage the resources available to both major broadsheet titles and current affairs programmes like Good Morning Scotland. How, we might ask, could a media under such strain perform its own representative task?

By the time the referendum on Scottish independence had taken place, anger at Scotland’s media deficit had become palpable. Often this outrage and resultant protests would focus on the agenda of particular journalists, forgetting the deep structural issues at play.

Peter Geoghegan, channeling Ernest Gelner, summed up the problem neatly in The People’s Referendum – ‘media plays a pivotal role in producing and sustaining the illusion of the nation-state as a permanent and immutable object’. Hence why the British option (No) was favoured: sometimes unwittingly, sometimes deliberately, by an overwhelmingly British media.

Today, many Scots could happily spend a lifetime complaining and protesting at the intransigence of a vast and cumbersome centralised broadcaster. The truth of the matter is, we could surround Pacific Quay for a decade and nothing would change inside. Control of Scotland’s media is not devolved, if we want it to be, we have to campaign as relentlessly as Scots once did for a parliament.

Control of Scotland’s media is not devolved, if we want it to be, we have to campaign as relentlessly as Scots once did for a parliament.

If we want to see modern Scotland in all its colour and complexity reflected back at us, to actually represent us, we need to start agitating for that now. As with any other form of institutional change in a democracy, there is one certainty: if the people don’t demand it, it will not change.

Scotland lacks the media structures required of a modern nation. Even in comparison to other semi-autonomous regions its media remains overwhelmingly metropolitan. But this chronic marginality also offers us a space to innovate.

If we demand the right to start all over again in Scotland, to build a new national media that expresses the best of Scottish traditions, it could offer a model for rebooting a journalistic trade so often compromised by the complexities of the information age. With such a media drawing on the enlightenment’s thirst for inquiry, a rooted, ‘glocal’, artistic temperament and a well worn disdain for power and pretence, we could create a new popular, agile, media in Scotland that foregrounds the human.

Like our search for a parliament, the route will be long and frequently compromised, but once established as a new reality no one will want to go back to the suffocating neglect of being represented elsewhere.

Click here to make a donation and help Christopher Silver raise the money required to publish his book, The Case for a Scottish Media.