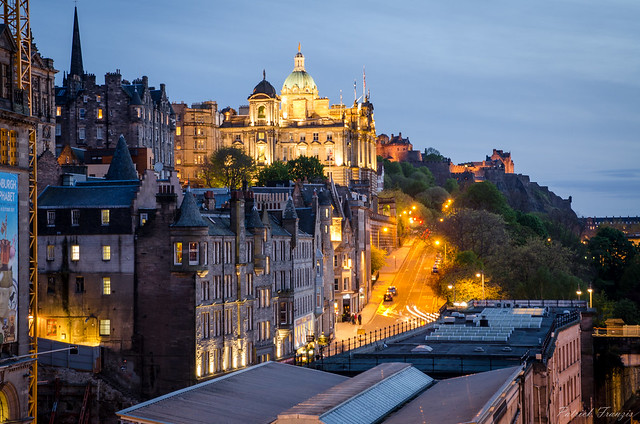 CITIZEN, a new campaign network that aims to reimagine Edinburgh as a city of “social justice and equality, not just a space for consumption and profit”, will officially launch today [24 April] in the capital.

Prompted by growing concerns over deregulation, over-development and commodification, Citizen represents the coming together of numerous Edinburgh-based campaign organisations and political action groups that hope to establish social justice and equality as both citywide priorities and eventual realities.

Commenting ahead of its launch at the Scottish Storytelling Centre this afternoon, Sean Bradley from the Old Town Development Trust and Citizen member, said: “It’s time for a radical rethink of the city’s economy led by its citizens”.

Megan Bishop of the Living Rent tenants’ union, one of the campaign organisations involved in Citizen, also said: “I am so excited to be a part of Citizen. The idea that individuals and groups from across Edinburgh may come together, unite, and re-affirm our right to the city is something really wonderful. We aim to stand in solidarity with one another and push for our common ideals of what Edinburgh should be, a place for people rather than profit.”

While a more detailed policy platform will emerge as Citizen drafts a ‘Manifesto for the City’, immediate priorities for the new coalition will be the promotion of community-led development across Edinburgh; the protection of land and public space held in the public good; an extension of parks, greenspace and biodiversity; the fight for fair rents and increased public housing over Edinburgh’s sprawling holiday let and second home sector; defending the capital from over-tourism and commodification; an examination of the power structure that currently defines the city’s governance; issuing a challenge to the dominant models of economic growth and business-led regeneration; the creation of an environmentally sustainable transport infrastructure, and the exploration of alternatives to the ‘festivalisation’ of Edinburgh.

In addition to these campaign goals, Citizen are also considering running candidates for public office in the city.

Citizen member Andrew Duncan commented: “Developers are building more accommodation at the same time as there is a glut of empty homes bought by unthinking people who like to have an Edinburgh bolthole for occasional holidays and second-home ownership.  This helps to destroy communities and leads to a rise in property price which in turn contributes to the unaffordability of homes by those who need them. The Scottish Government and Edinburgh council are doing little to deal with this issue. That is why this new project is essential.”

Speaking to CommonSpace, Bella Caledonia editor and Citizen founding member Mike Small explained that Citizen has “been meeting as a kind of pre-launch network for a couple of months to agree its aims, and for various campaign groups and organisations to sign up and form those aims together.

“It’s a network of different groups across the city, who have understood that their single issues are actually connected; it’s growth and overdevelopment and exploitation they have in common.” Citizen member Mike Small

“It’s a network of different groups across the city, who have understood that their single issues are actually connected; it’s growth and overdevelopment and exploitation they have in common. So rather than campaign groups working in the silos of their own neighbourhoods or their own issues, we’ll be working as a network across the city – building a movement to make some of these changes.”

At present, groups participating in Citizen include Living Rent, the Fair Fringe Campaign, Save Leith Walk, Save Meadowbank, and the campaign to save Edinburgh Central Library.

Citizen also intends to look for international examples to inform how life in Edinburgh might be reformed, Small continues: “Certainly in Berlin, Venice and Amsterdam, there’s a more advanced resistance to over-tourism, so we’ll be bringing speakers from those cities to address people in Edinburgh. Also in Berlin, there’s a much more advanced housing resistance movement, where they’ve managed to run candidates and really begin to change housing policy by having a plebiscite in the city about what to do about the housing crisis. So certainly, we’ll be trying to learn from those movements.”

Citizen already have plans for the coming year, says Small: “We’ll be hosting a conference on the housing crisis in the summer, and also one on the problems brought by the festival. But it’s worth saying that we don’t start out with a ready-made set of solutions. We have a year-long process where we’re going to create a manifesto of the city, through a participatory process where we’re asking people to reimagine the city as if it wasn’t run for the wealthy and for developers. So that manifesto of the city will be developed by asking people what they think.

“Although there are things we’re against and will protest about, we’re also part of this process of getting positive ideas to bring about change. But we don’t do that from a standpoint of ‘we have all the answers’.”

More details about Citizen can be found on its website.