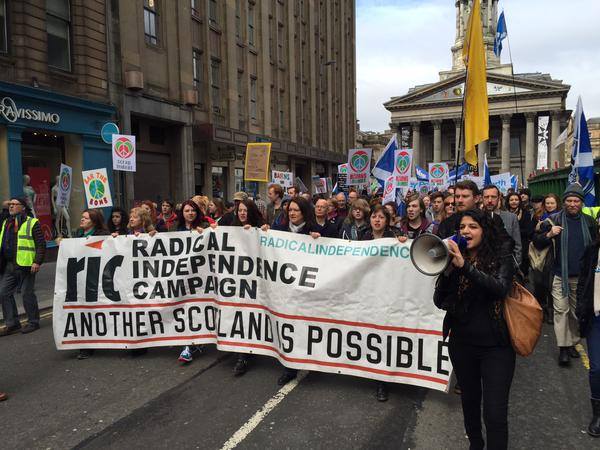 Other speakers will include Aamer Anwar, George Kerevan, Lesley Riddoch and Ross Greer

The annual gathering of the Radical Independence Campaign (RIC) – which was formed in 2012 in anticipation of the 2014 referendum, and brought together some of Scotland’s most prominent socialists, republicans, environmentalists and anti-austerity campaigners in their efforts to promote a left-wing vision of independence – will confront some key questions facing the movement in the wake of Brexit, the possibility of a second independence poll before 2021, and the UK’s ongoing constitutional crisis.

While a full list of speakers are yet to be confirmed, the line-up at present includes Clara Ponsati, a former Catalan minister and University of St Andrew academic around whom a nationwide solidarity movement formed during the Spanish Government’s attempt to extradite her on charges relating to the 2017 Catalan independence referendum; Aamer Anwar, Ponsati’s lawyer, whose career has seen him emerge as an internationally-recognised legal campaigner; and Tariq Ali, the Marxist theorist and writer who emerged during the 1960s as one of the key voices of the New Left, and lent his support to the Yes campaign in the run up to 2014.

Speaking to CommonSpace, Shafi said of the conference: “This will be a vital staging post for the independence movement. There are many big debates that we need to have in order to move forward. But alongside those debates there is an urgent need for action. As the crisis of the British state intensifies, it is critical that the independence movement moves in to a new phase of activism, conscious of how the terrain and strategic challenges have changed since 2014.

“The conference will hear from a range of speakers well known to the independence movement, international guests such as Clara Ponsanti, as well as some of the most dynamic left-wing campaigns in the country at the present time. Areas of discussion will include tactics for winning independence, how we will negotiate independence in the context of Brexit, and how we can ensure that independence will deliver for the mass of Scots who have had enough of privatisation and austerity.

“It is about time the movement was taken out of the hands of out-of-touch SPADs and Charlotte Street Partners and put where it belongs – with the people who are fighting day in, day out, not just for independence, but for better housing, against poverty pay, and for radical solutions to the climate emergency.

“As the crisis of the British state intensifies, it is critical that the independence movement moves in to a new phase of activism, conscious of how the terrain and strategic challenges have changed since 2014.” RIC co-founder Jonathon Shafi

“We are working to bring a new generation of activists to RIC 2019. We will be on the independence demonstration on 5 October in Edinburgh, as well as hitting the streets with stalls, leaflets and posters. Everyone can help. Just get to the website, leave your details and we will be in touch. We have already been inundated with messages and registrations for the conference, so don’t delay on securing your space.”

Also commenting, Aamer Anwar told CommonSpace: “If I am asked why independence, about why am I speaking at Radical Independence, then it is about independence being a means for the bigger dream, it’s about the future of our country, our children, our children’s children.

Adam Ramsay added: “The British state is in a deep crisis, which has been there for at least the last decade, but has become so much clearer in the last year. We can’t really understand that crisis, and understand why it’s so important for those of us who have the opportunity to escape the shadow of the British state, without some proper analysis. That analysis is by its nature radical – we’ve got to get to the root causes of these problems, and the root causes lie in our long imperial history and the economic system our state defends.

“I’m keen to talk about how our investigations of corporate influence over the British state, and the state’s role in defending offshore and laundered money, show exactly why Scotland needs to take the opportunity to escape its clutches and turn ourself into a modern democratic society.”

The Radical Independence conference will take place at the Glasgow Radisson Blue Hotel on 26 October. Tickets can be booked here.