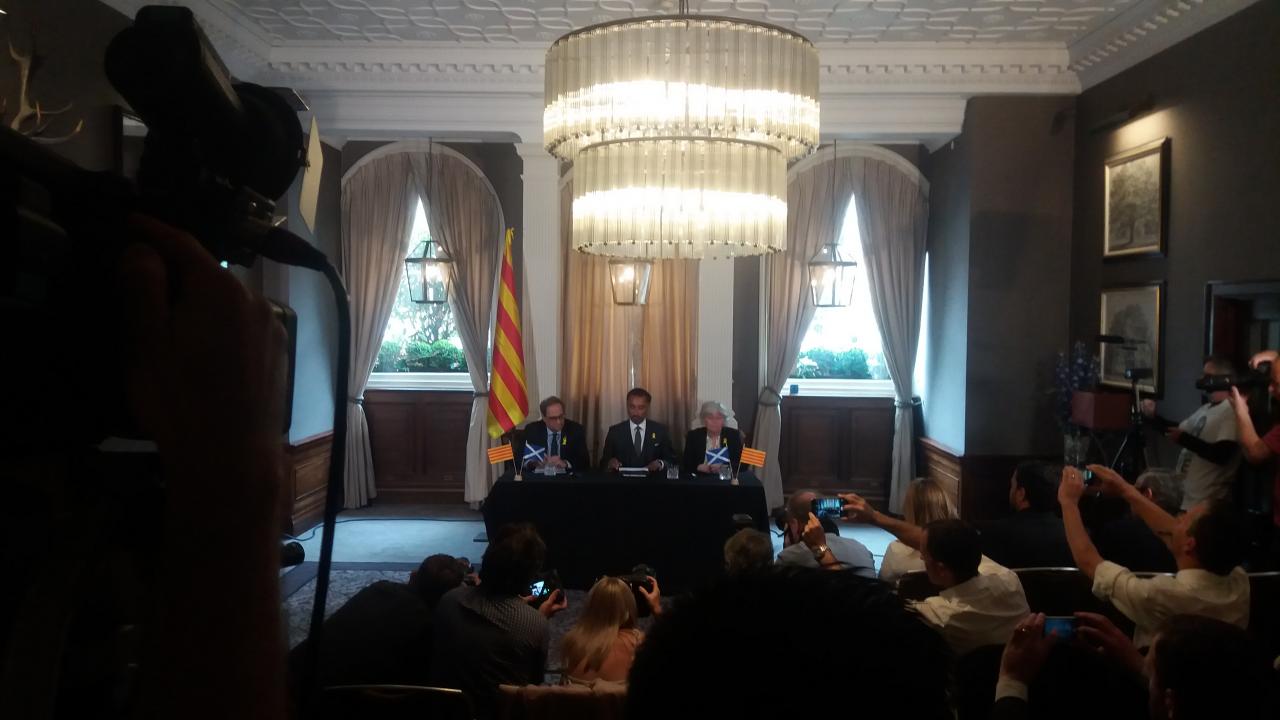 President Quim Torra will also be meeting with representatives of the SNP, the Scottish Greens, Scottish Labour and the STUC

CATALAN PRESIDENT QUIM TORRA has voiced his solidarity with the exiled former Catalan minister and St Andrews academic Clara Ponsati ahead of her extradition hearing on 30 July, hours before Torra’s meeting with First Minister Nicola Sturgeon.

At a press conference held at Edinburgh’s Principal Hotel immediately after a meeting between President Torra, Ponsati and her lawyer, the noted human rights advocate Aamer Anwar, Torra declared: “Clara, we are with you, we will support you, we will help you as much as possible. You are far from home, but we want you back home with your family, your friends – and we will continue fighting.”

Ponsati is one of several former members of the Catalan Government currently in political exile and fighting attempts at extradition by the Spanish Government for their role in the Catalan independence referendum of 1 October 2017, which was declared illegal by the Spanish constitutional courts. Under a controversial European arrest warrant, Ponsati has been charged with violent rebellion and misappropriation of public funds.

When questioned, both Torra and Anwar emphasised that the Catalan president would not be asking Sturgeon to intervene in Ponsati’s case, as Scotland’s judiciary is independent of any government interference.

Addressing the press, Anwar reiterated that his client “utterly refutes” the charges she faces.

“We have a concern that if Clara is returned to prison in Madrid that Spain cannot and will not guarantee her safety and she faces a real threat to her life whether it be from the authorities or fellow prisoners.” Lawyer Aamer Anwar

Anwar stated: “Across Europe, Spain stands accused of conducting desperate and politically motivated prosecutions. Clara is accused of orchestrating violence, yet the warrant fails to ever specify a single act of violence or incitement attributable to her.”

Anwar once again raised the conduct of Spanish authorities during the Catalan independence referendum, many of which employed violent tactics in an attempt to suppress the unauthorised plebiscite.

Anwar continued: “Unsurprisingly, there is no mention of the actions of several thousand Spanish police, and 6,000 state security forces accused of carrying out brutal unprovoked attacks on a civilian population at over 2,000 polling stations.

“In a civilised democracy, police officers are the guardians of law and order, who protect the public they serve, yet the actions of the Spanish police on October 1st has been compared to the dark days of Francoism.”

Anwar observed that on 9 November 2017, the Spanish Supreme Court acknowledged that there had been no misappropriation of public funds by the Catalan Government, and yet the charge against Ponsati remains. Anwar therefore characterised the warrant for Ponsati’s arrest and extradition as a “grotesque distortion of the truth.”

In June of this year, the Catalan journalists Laia Vicens and Xavi Tedó, who authored a bestselling investigation into the planning of Catalonia’s independence referendum, also told CommonSpace that their findings demonstrate charges regarding misappropriation of funds against Catalan politicians such Clara Ponsati are groundless.

Earlier this month, it was revealed that the Advocate Depute, the prosecutor of the Crown Office, acting on behalf of the Kingdom of Spain, would consider the test applied to the charge of rebellion against Ponsati as having been met, by means of charges in Scotland of conspiracy to alter the constitution by criminal means and treason. Treason has not been applied as a charge in the UK since 1945.

Anwar continued: “To put the charge of treason in context, imagine tomorrow if the first minister of Scotland were to call a referendum, and Theresa May sent 15,000 police officers to attack voters and then imprisoned half of the Scottish Government whilst issuing warrants for Nicola Sturgeon and others who fled to Europe, threatening them with over 30 years in prison if convicted.

“Of course that scenario is an impossible nightmare – but that is the situation that Catalonia faces today.”

Elaborating on his consistent argument that a conviction of Ponsati, who faces up to 33 years’ imprisonment, would amount to a death sentence, Anwar added: “We have a concern that if Clara is returned to prison in Madrid that Spain cannot and will not guarantee her safety and she faces a real threat to her life whether it be from the authorities or fellow prisoners.”

“What I want to tell Mrs Sturgeon this evening is: thank you. You are taking care of one of the most admired colleagues that we have. This is strengthening the links between Scotland and Catalonia, two nations with the same goal – independence of our countries.” Catalan President Quim Torra

In his remarks, Torra thanked Anwar, the people of Scotland, and in particular Nicola Sturgeon, who hosted both Anwar and Ponsati at the SNP’s Aberdeen conference in June.

Torra said: “I would like also to thank the Scottish people for their solidarity, for their generosity, for supporting Clara. What I want to tell Mrs Sturgeon this evening is: thank you. You are taking care of one of the most admired colleagues that we have. This is strengthening the links between Scotland and Catalonia, two nations with the same goal – independence of our countries.”

Torra said that he had raised Ponsati’s case during his first meeting with the new Spanish prime minister Pedro Sanchez on Monday [9 July], as well as those of other Catalan political prisoners and exiles.

“I will insist always that political prisoners and exiles are not bargaining chips,” said Torra, “because we believe their imprisonment is unfair. Spanish justice is persecuting Clara Ponsati, among other political exiles, for defending every Catalan’s right to exercise their vote on 1 October.

“Pay attention to this sentence: just because Clara, with others, let the Catalans vote, they are in exile and they are imprisoned in Spain. Can you imagine Scottish politicians in prison just for letting the Scottish people vote? Can you imagine sending the British police to the polling stations in the referendum in Scotland, hitting the people just because they were voting? Can you imagine the Queen of England addressing her speech to the Scottish people, as the King of Spain did, justifying the violence of the 1 October? That is what happened in Catalonia.”

Torra continued: “Catalan independentism has made Europe focus on what is happening in Spain, and realise that here there is still Francoism on the streets and fascist outbursts.”

Torra said that his discussions with the first minister would not relate to Ponsati’s ongoing battle against extradition, but would instead focus more broadly on the Catalan crisis, which he defined as concerning universal principles, rather than a mere national struggle.

Torra said: “There is now in Spain a clear violation of human rights [relating to] the right to self-determination, repression, political prisoners, exiles, freedom of expression, persecuted teachers and artists.

“The international community must know about these violations of human rights. We no longer speak of only a national conflict, but a democratic one – about civil and political rights.”

Torra pointed to Scotland’s own independence referendum as a preferable example of how the issue of self-determination should be decided, saying: “The Scottish referendum of the year 2014, agreed between Edinburgh and London, was the best example that conflict should always be resolved by voting, and never, ever by violence and repression.”

Asked by CommonSpace if that Catalan Government had any plans to communicate with the UK Government and whether they anticipated any change in the UK position of Catalonia, which has thus far favoured the Spanish Government’s attempts at repression and remained silent on Spanish human rights abuses, Torra said: “After we declared independence, and with the complication of the coup d’etat of the infamous article of the Spanish constitution that abolished our parliament and dismissed all our government… we are reopening the Catalan delegations that we have around the world.

“Yesterday, we announced the name of the delegate of Catalonia in the United Kingdom – the same name that was dismissed in October. I feel that this can help.”

“I sent a letter to all the heads of state and heads of government in Europe – we are trying to do our best with all the possibilities we have with friends around Europe. It is difficult for Catalonia to consolidate the states and change their positions; it is easier for us to address the citizens of Europe. When you are talking about human rights and democracy and civil rights, the Europeans understand that something grave is happening in Spain.”

Describing her reaction to the charge of treason and her feelings ahead of her hearing, Ponsati said: “I just find the whole situation surreal. I’ve been watching this time-travel series of Netflix – Outlander – and if these guys succeed, I will be seeing only one more episode.