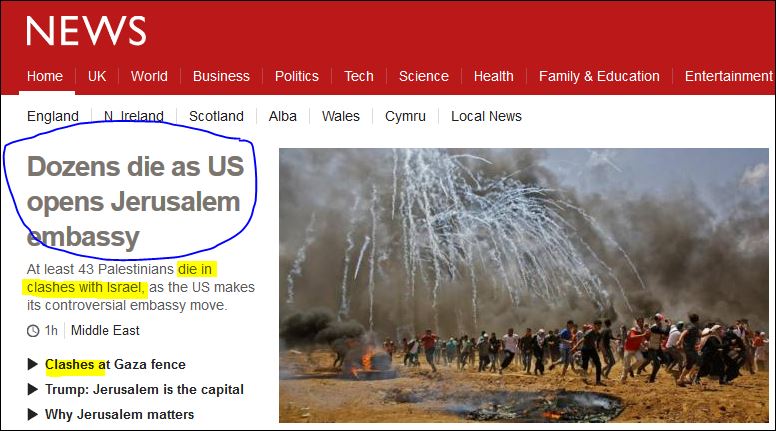 CommonSpace spoke to Greg Philo, author of three books on media reporting of Israel-Palestine flashpoints, about the BBC’s coverage of the latest massacre in Gaza

THE BBC’s reporting of the latest massacre of Palestinians in Gaza by Israeli military forces has once again led to criticism of the public broadcaster for not providing an accurate account of events.

Media scrutiny website Media Lens took the following images from the BBC News website yesterday [14 May] as the killing of 58 Palestinians and injuring of 2,700 more was ongoing.

The use of clashes suggests a symmetry of violence between both sides, and physical violence inflicted upon both sides.

But there were no clashes between Israelis and Palestinians – there is a buffer zone between Israeli controlled territory and the people in Gaza which no protestor crossed during the massacre. The violence was perpetrated by one side and the killings all occurred on one side – no Israeli soldier or citizen was hurt during the slaughter. Indeed, the snipers and other cutting edge military equipment used by the Israeli Defence Force was carried out almost exclusively from over 100 metries away at the Israeli side of the buffer zone in fortified positions.

The main headline in the two images not only does not make it clear who the perpetrator was in the massacre, but also does not distinguish who was killed. “Dozens die” and “Gaza clashes” could refer to Israelis, Palestinians or both.

At the same time as the BBC was leading with this portrayal, Amnesty International and the UN posted the following tweets. 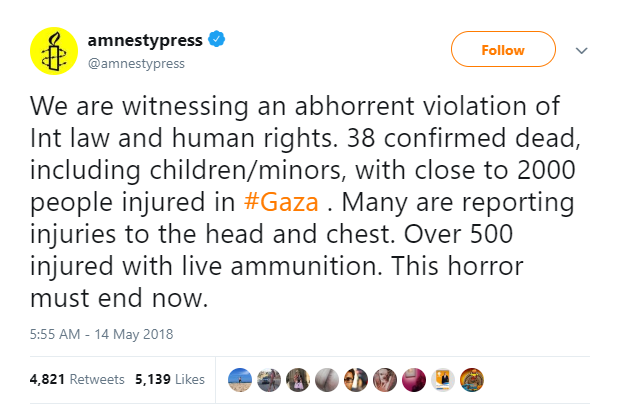 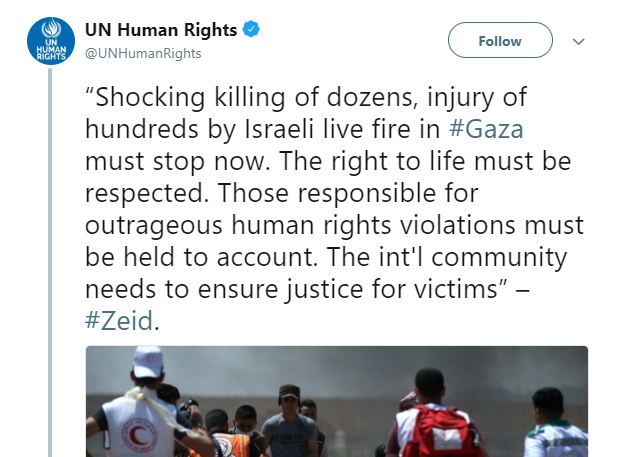 These unambiguous messages could not be clearer – but why does it take human rights groups to give clear and accurate statements about what is happening on the ground? Is that not the job of the BBC?

Perhaps the most in-depth critique of BBC reporting of Israel-Palestine flashpoints has come from Greg Philo, professor of Communications and Social Change at the University of Glasgow, who has authored three books about UK media reporting of Israel and Palestine as part of the Glasgow Media Group. The most recent was More Bad News from Israel in 2011, adding to the seminal Bad News from Israel in 2004 with new research on the 2008 Gaza war and the 2010 attack on Israeli attack on an aid flotilla to Gaza. That research included in-depth interviews with BBC editors and journalists, and focus groups with BBC viewers.

CommonSpace asked Philo to comment on whether he thought the three images above were fair and impartial.

“No,” he said. “To use terms such as ‘Gaza Clashes’ and ‘dozens die’ is euphemistically to avoid saying that Israeli troops have killed unarmed protesters.”

Philo pointed to a report in The Sun, a newspaper widely criticised for sub-standard reporting on a variety of issues, saying that even it was clearer than the BBC about who the perpetrators of the killings were.

The Glasgow University Professor told CommonSpace that he was unsurprised by this, as his many years of research of BBC reporting on the issue “has always found the same thing”.

“Reporters and editors told us that they couldn’t fight the BBC machine, that it was very difficult to produce an accurate account on Israel-Palestine because of the pressure they are under.

Summing up the general approach the BBC takes to massacres in Gaza, Philo described it as “say whatever you like about the Palestinians; report the suffering in Gaza, but not the causes of that suffering.”

He added that his focus group work had shown that people knew the Israeli perspective but didn’t know the Palestinian view “because they didn’t hear it”.

“[Palestinians] see themselves as living in an apartheid state – but no one watching the BBC would know that.”

Philo said the reason for this was “simple public relations and power politics”.

He added: “We have spoken to BBC producers who have told us ‘we wait in fear of the phone call from the Israelis’. That’s what you’re facing as a journalist there. It’s much easier to just keep your head down and pay the mortgage in that atmosphere.”

Philo wanted to be clear that he was not being critical of all BBC journalists and did not believe all BBC coverage was the same, highlighting BBC Middle East Correspondent Jeremy Bowen’s report on Monday [14 May] News at 10.

“It was terrific – very critical and gave clear context and history, right back to 1948,” Philo said, referring to the year the Israeli state was established through the forced displacement of 750,000 Palestinians, called ‘the Nakba’ by Palestinians, of which the 70th anniversary is today [15 May].

But, Philo said, Bowen’s coverage was in the minority on the public broadcaster.

“Unfortunately many at the BBC are now well trained in the euphemisms: ‘dozens die’, ‘violence in Gaza’, ‘clashes’. It means the viewer that has no wider context cannot grasp what is actually going on.

“For example our focus groups showed viewers don’t understand the word ‘occupation’: so they think occupation refers to where they live – many think Palestinians are the occupiers because of this confused language. We asked the BBC producers, ‘why don’t you say the Palestinians are occupied under military rule?’, and of course they said they couldn’t.”

Asked what citizens who are angry about the BBC’s coverage should do, Philo said: “Go on social media and denounce it. We own the BBC, it acts on our behalf – it’s outrageous that it provides no service to peace whatsoever.”