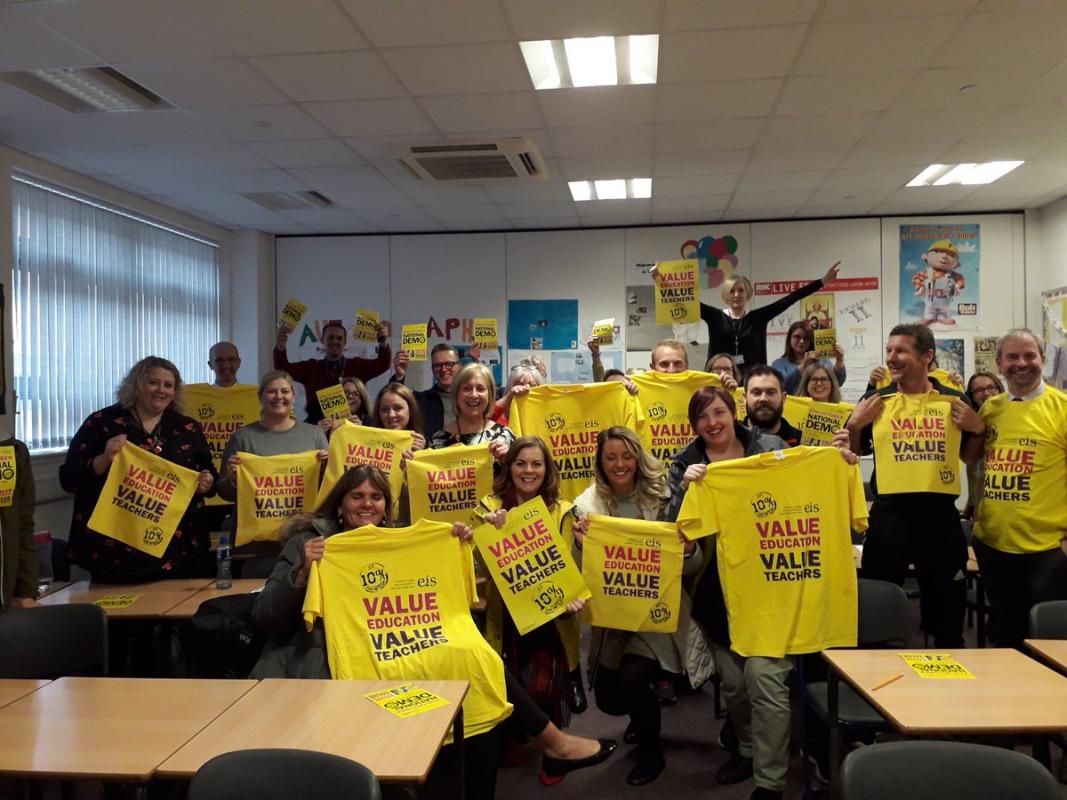 Workers seek to reclaim lost earnings of austerity era; EIS General Secretary Larry Flanagan has said teachers pay in Scotland has fallen approximately 24 per cent in real terms over the past decade

THERE were clashes in the Scottish Parliament today (25 October) over demands from teachers for a pay rise after years of stagnant pay and mounting workload,  ahead of a march of teachers in Glasgow on Saturday (27 October).

The disagreement at First Minister’s Questions was between the parliament’s two pro-independence parties, the Scottish Greens and the SNP, comes after a major strike in Scotland’s largest city, with over 8,000 women workers striking against Glasgow City Council over a more-than-decade long equal pay dispute over equal pay. Hundreds of refuse workers and parking ticket collectors refused to cross picket lines and joined solidarity actions.

Scottish teachers, organised by the EIS Union, will march in support of their demand for a 10 per cent pay rise. The union turned down a 3 per cent above inflation offer by the Scottish Government earlier this month.

Speaking during FMQs, Scottish Greens co-convener Patrick Harvie said: “The First Minister must promise teachers the government will give the pay rise that’s due so that we can attract and retain the teachers our children need.

“In Glasgow thousands of teachers will take to the streets to make clear their demand for a fair pay settlement. They have already told the government they will not have their members divided against one another, with some given a decent rise and others left behind.

“The loss of 3500 teachers since 2007, and the reliance on temporary contracts for so many newly recruited teachers, is having a direct impact on the quality of education. More stress in classrooms and staff rooms, more teachers who don’t have the permanence that lets them build a strong relationship with their pupils.

“If we want the excellent public services this country deserves, we need to make the resources available. This SNP government should no longer delay giving councils both the funding and the powers they need.

“The consequence of getting this wrong won’t just be unhappy teachers. Holding back teachers’ pay, and squeezing the budgets of local councils will prevent the educational improvements that I do believe the FM wants to see.”

Responding to the demands, Sturgeon said: “We are committed to fair pay rises for all of our public sector workers.

“Where we have already agreed deals, I think we have demonstrated that. I do believe that this is a generous and fair offer and hope that it will be considered in such a way but we are committed to continuing negotiations in good faith.

John Dickie & Peter Kelly: Why the £5 child benefit top-up is the right policy at the right time

“We absolutely recognise that public sector workers have taken a lot of pain through pay restraint in recent years and we are committed to redressing that as quickly as we can.”

It is expected that EIS will ballot members over the pay offer. General Secretary Larry Flanagan has said that “he reality is that Scotland’s teachers have seen their take-home pay reduced, in real-terms, by around 24% over the past decade.”

Average UK workers’ pay fell more than 10 per cent in real terms over a decade between the beginning of the global economic crisis in 2007 and 2017 – an unprecedented retraction in modern times.

Discussing Scottish teachers’ pay and conditions with Scottish Government Education Minister John Swinney at the SNP’s annual conference in early October, EIS Ex-President Nicola Fisher said: “Teachers are worse off by hundreds of pounds a month. Ordinary people did not cause the financial crisis, but we are certainly footing the bill.

“A teachers’ starting salary may compare relatively well but this falls away after a few years and then stagnates entirely. So we then have a scenario where teachers are opting to work in other countries or careers where the pay is better.”

She added that teachers’ pay was not taking into account the enormous workload that teachers now face, taking them well beyond what they are paid for: “Workload is the iceberg of the education system. People think they understand the scale of the problem because they can see the tip of it, but unless you are experiencing it day in and day out, you cannot hope to grasp the full horror which lurks beneath the surface.”

“Teachers are working far in excess of their contracted hours. With some reports saying teachers are regularly working 50 or 60 hour weeks. Even then all the work isn’t done. The effect this is having on teacher health and well being is disastrous.”

The Glasgow march will head off from Kelvingrove Park at 11:30am.