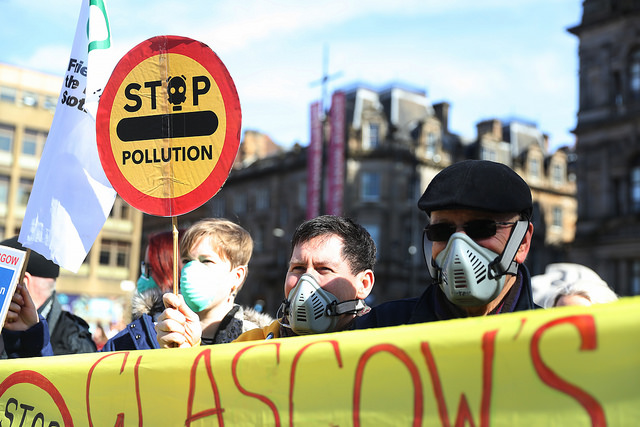 Claudia Beamish, Labour South of Scotland MSP, argues that the resignation of two experts from the Scottish Government Clean Air Strategy Group should be a wake up call on air pollution

IT CAN sometimes take a resignation – or two – to throw things into sharp focus.

While Scottish Labour has long been critical of the Scottish Government’s lack of urgency to really tackle climate change and air pollution, the recent loss of two experts on its Clean Air Strategy Group underlines the fact that when it comes to the environment, the SNP is all strategy but no real action.

Let’s take climate change. We know from a recent poll by the WWF that 86 per cent of Scots are concerned that climate change threatens one in six plants and animals with extinction, that 85 per cent agree climate change is affecting seasons and nature and that 74 per cent believe the Scottish Parliament should do more to tackle it.

And yet the SNP’s draft climate change plan, that sets the parameters for climate action over the next 14 years, contains little of substance beyond existing policy commitments. It fails to address how the heaviest greenhouse gas emitters will tackle the problem and help Scotland become a net zero emitting nation. The independent UK Committee on Climate Change stated in its Progress Report  – “The Plan as it stands lacks credibility in meeting the emissions targets to 2032 and fails to prepare properly for deeper decarbonisation in the longer term”.

There is little being done to tackle the emission problems around agriculture as voluntary action by farmers is not working well generally – the target of 9% for this sector is depressingly unambitious when there could be significant contribution to reductions; and when it comes to buildings there is no urgency to get moving quickly to low carbon heating and in fact the plan pulls back from draft Plan ambitions on renewable heating.

Equally concerning is the singular lack of progress on talking climate change issues in the marine environment. In the draft Climate Change Plan, the Scottish Government failed to even raise the issue of Blue Carbon and how our coasts and inshore waters can best contribute to tackling climate change. This has now been addressed with some research commitment but years of opportunity have been squandered and the issue was only included on challenge from the Environment Climate Change and Land Reform Committee of which I am a member.

And as the resignations last month of Professor James Curran and Emilia Hanna have shown, the Scottish Government’s apparent ambition to tackle air pollution has also disappeared.

Low Emission Zones are a radical way of cutting vehicle pollution in our towns – and we’ve all likely experienced the awful choking smell of car fumes. While the first LEZ for Glasgow should be an exemplar for the following three, very worryingly it is not. The timescales are far too long for some actions including the arrangements for the shift to low carbon buses, and there are insufficient enforcement measures like a lack of signage and new cameras.

A failure to lay out adequate plans to catch and prosecute drivers of dirty vehicles would make a mockery of this LEZ planned for Glasgow. There should be more funding from the Scottish Government to help make this an exemplar for the future. Scottish Labour has the ambition and the urgency to tackle air pollution which would see Scotland meets its obligations under EU law by 2020 and properly protect peoples’ health, including children and those with chronic lung conditions.

Urgency is needed. Scotland needs action to cut air pollution, to cut the emissions from homes, transport and food production and land use to ensure that we can counter the effects of climate change in Scotland and across the world. That’s why Labour will table amendments to the upcoming Climate Change Bill to make it more ambitious and hold each sector to account.

There has been progress around energy – now that my proposed Bill, with the support of so many in the labour movement, climate activists and NGOs alongside communities across Scotland, has helped stop onshore fracking we can look to a more sustainable, cleaner energy future.

However, the renewables sector is not growing fast enough in terms of jobs. Scottish Labour’s Energy Commission is being set up to address this issue. It will have Just Transition at its heart to ensure that as we shift to the low carbon economy, there are highly skilled, well paid unionised jobs in the energy sector. The Just Transition Trade Union Partnership will have a significant role to play in this, involving as it does the STUC, Friends of the Earth, Unite, Unison, PCS and UCU. Our Energy Commission will also focus on manufacturing and re-manufacturing opportunities and embed these in our Industrial Strategy proposals. There must not be more missed opportunities in the renewables supply chain.

We must also do more to protect our natural environment.  There is also a failure by the SNP to meet biodiversity targets and concern about meeting the 2020 ones. We know from research, specifically by the RSPB, that Scotland’s natural habitats are shrinking. Scotland’s natural beauty is one of our most valuable assets and we must protect it. But it doesn’t help when the money being spent on protecting habitats by stopping the invasion of non-native species is being severely cut from £748,000 last financial year to £295,000 in this one.

This again shows again a lack of real commitment and action. Non-native invasive species, whether animals or plants, are a scourge on our ecosystem and our infrastructure, and cost £23 million in 2017. Grey squirrels threatening red squirrel populations, and Japanese knotweed harming our landscapes are just two examples of invasions which are extremely difficult to tackle.

Our forests and woodlands are also a vital part of Scotland’s eco-system and our economy. We defeated the SNP’s plans to abolish the Forestry Commission in Scotland and centralise it in a government department, but equally importantly, we also successfully amended the Forestry and Land Management Bill to ensure that climate change, deer management and biodiversity must be considered in the new devolved forest strategy.

The SNP has taken its eye off the ball when it comes to our environment. Climate change is the great challenge for our generation. Scotland needs strong legislation that sets the framework to 2050 for action to bring us into line with the targets set out in the Paris Agreement on climate change.

As part of our plan to make Scotland a greener country, Scottish Labour will push the SNP to stress-test all policies against our climate commitments, push to create jobs in low-carbon industries and deliver a public transport system fit for the 21st century, and indeed a country fit for the future.