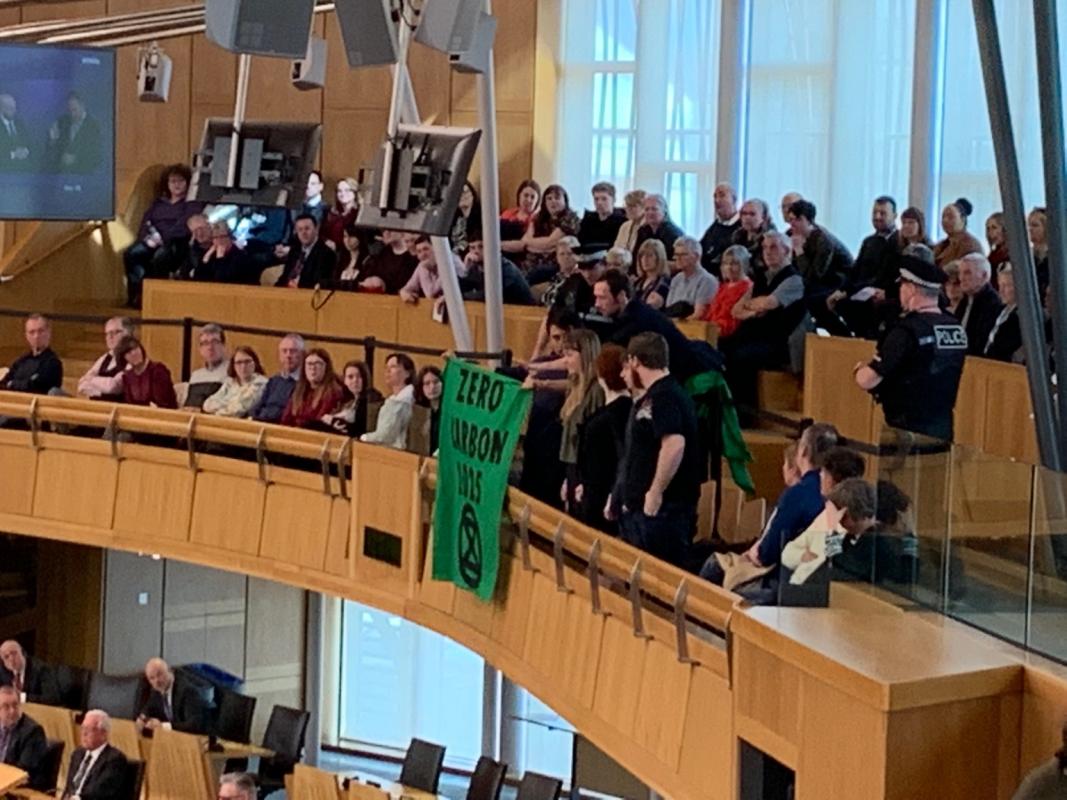 At midday, several activists dropped a banner from the parliamentary gallery, reading: “Will the First Minister establish a citizen’s assembly to address the climate emergency?” while reiterating the question vocally. This led to Presiding Officer Ken Mackintosh to briefly suspend proceedings, and the BBC’s online parliamentary feed being temporarily cut.

Extinction Rebellion’s demonstration follows yesterday’s defeat of a Scottish Green motion to declare a climate emergency by 111-6. Given that First Minister Nicola Sturgeon met with Scottish climate youth strikers earlier this week and told them: “Climate change is the single most important issue of our time,” Extinction Rebellion Scotland have accused Sturgeon’s rhetoric around climate change of being “nothing but empty words”.

Support for the Extinction Rebellion activists was expressed shortly after their demonstration by Green MSP Ross Greer, who wrote on Twitter: “The young people taking this action at #FMQs are acting more rationally and responsibly than the 111 MSPs who rejected climate science.”

Yesterday every other party voted down a Green motion declaring a #ClimateEmergency.

The young people taking this action at #FMQs are acting more rationally and responsibly than the 111 MSPs who rejected climate science. #ExtinctionRebellion https://t.co/aqAO1v0II6

Following the defeat of the climate emergency motion, Green MSP Mark Ruskell commented: “The evidence is clear; we need to take ambitious action to cut emissions, we need a just transition to realise the green jobs bonanza that can be delivered with our renewables potential, and we need to accept that using every last bit of fossil fuel reserves is simply incompatible with dealing with the climate emergency. The obvious starting point is a watertight ban on fracking. It would be profoundly irresponsible to open up new fossil fuel frontiers, yet the Scottish Government continues to refuse to take the action that is required.”

The Scottish Government has committed to reducing carbon by 90 per cent by 2050, promising to make Scotland carbon neutral as soon as possible thereafter. However, given that the IPCC reported in 2018 that the world has less than eleven years to limit globally catastrophic climate change, many environmentalists have argued that the Scottish Climate Bill falls short of measures the report deems necessary.

Extinction Rebellion are currently gearing up for an international mass protest on 15 April, which the group has described as a “full-scale rebellion to demand decisive action from governments on climate change and ecological collapse”, which will see them engage in “acts of non-violent civil disobedience against governments in capital cities around the world.”

An Extinction Rebellion statement quoted in the Ecologist earlier this week warns: “This is not a one-off march – we will keep going for as long as we have to, shutting down cities day after day until our demands are met.”