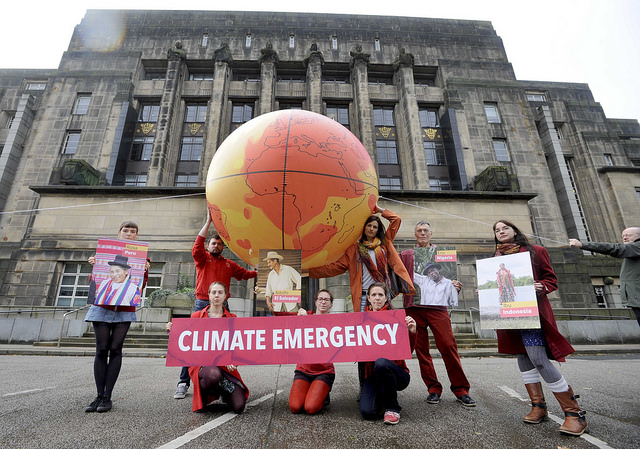 FOLLOWING THE publication of the Scottish Government’s Climate Change Plan on Wednesday, environmental campaigners and opposition politicians have criticised the proposals for failing to deliver on policies needed to create a zero carbon Scotland.

As part of its obligations under the 2009 Climate Act, the Scottish Government had to publish a report outlining its plans for meeting its targets for reducing emissions by 42 per cent by 2020, and by 80 per cent by 2050. After publishing a first draft in January, the final version was unveiled on Wednesday detailing the government’s plans to reduce emissions by 66 per cent by 2032.

By 2032, the plan states that transport emissions should be cut by 37 per cent, supported by the introduction of low emission zones, and by the phasing out of new diesel and petrol cars eight years ahead of the UK Government’s target.

Environmental campaigners say the targets don’t go far enough, and in some cases represent a step back from the first draft published earlier in the year.

Chair of Stop Climate Chaos Scotland Tom Ballantine said: “This Climate Change Plan still doesn’t deliver the detailed policies or the necessary ambition to drive a just transition to a zero carbon Scotland. The significant steps forward in transport that we welcomed in last year’s Programme for Government are undermined by steps backwards in this Plan.

“The many suggestions for improvements from MSPs and several parliamentary committees have been largely overlooked. Those MSPs should use the upcoming Climate Change Bill as an opportunity to fix the significant shortcomings in this Plan.

“In areas such as reducing emissions from our homes the government has significantly decreased ambition from its first draft.”

Ballantine said that the modest targets and lack of a “credible plan” in relation to agricultural omissions was particularly concerning. “Agriculture and land use now account for almost a quarter of our emissions,” he said.

“It is often those least responsible for historic emissions who are bearing the brunt of catastrophic events.” Tom Ballantine, Stop Climate Chaos Scotland

“The lack of progress made by the cabinet secretary responsible for farming on issues like soil testing and managing our nitrogen fertiliser use is deeply disappointing.

“This Climate Plan is a missed opportunity to deliver a progressive, sustainable and successful economy for Scotland.”

The Scottish Government is expected to unveil a new Climate Bill in the next few months, which Stop Climate Chaos has said will make an update to the Climate Change Plan necessary in order to meet campaigners’ calls for a target of zero emissions by 2050 at the latest, and of 77 per cent by 2030.

New Zealand, Norway, Sweden and Iceland have already committed to reaching net-zero emissions by 2050, and the European Parliament has recommended that Europe as a whole reaches this target by 2050.

Ballantine continued: “The upcoming Climate Bill must address the huge untapped potential for ambitious new policies that will deliver multiple benefits for the economy, public health and our environment. The urgency of climate change requires the Scottish Government to set strong new targets in this Bill, including increased action before 2030 which will put us on a path to zero emissions by 2050.

“In Scotland and around the world, people are already feeling the impacts of a changing climate, from increased storms and wildfires to floods and droughts. It is often those least responsible for historic emissions, and the least able to cope, who are bearing the brunt of catastrophic events.

“Scotland, a fossil fuel producing nation, has a particular duty to reduce emissions and join other leaders in bringing about the required urgent global action.”

She said: “Time and time again the SNP government has been criticised for a lack of climate policy, but now its ambition to tackle climate change has disappeared too.

“While pressure from Scottish Labour and stakeholders has delivered a turnaround on transport emissions, agriculture now seems to be forgotten, with only a nine per cent decrease in emissions asked of it over the next 14 years. Encouragement alone is not enough.

Scottish Green MSP and environment spokesperson Mark Ruskell commented: “The published climate plan looks like ministers have used the promise of progress on electric vehicles to scale back plans to tackle fuel poverty, allow traffic to grow and avoid more ambition in agriculture.

“We need to see a resurgence in clean public transport that is genuinely run in the public interest.”

“Our support for the switch to electric vehicles, and the charging infrastructure they require, will cut greenhouse gas emissions and improve air quality.” Environment secretary Roseanna Cunningham

The cabinet secretary for environment, climate change and land reform Roseanna Cunningham, however, said the plan would pave the way for “transformational change” and allow the Scottish Government build on successes in reducing emissions to date.

She said: “Improving energy efficiency will help combat fuel poverty as well as reducing emissions. Record levels of investment in walking and cycling, as part of our Active Nation initiative, will make Scotland a healthier and safer country for everyone by cutting pollution.

“And our support for the switch to electric vehicles, and the charging infrastructure they require will cut greenhouse gas emissions and improve air quality.”

Cunningham added: “We fully recognise that this plan will be challenging to achieve and the journey ahead will be far from straightforward.

“But we have a duty to provide leadership on this vital issue, while ensuring that Scotland seizes the valuable economic opportunities which the transition to a low carbon economy presents.

“Across the Scottish Government, we are working hard every day to do exactly that and in the coming months we will bring forward a new Climate Change Bill which will raise the bar higher still.”