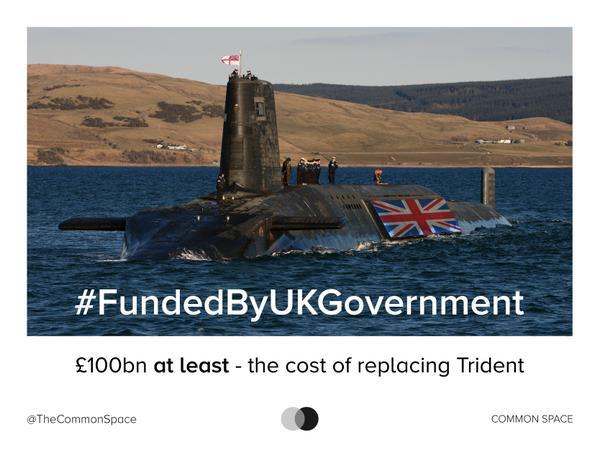 Private polling taken as a boost for anti-nuclear campaigners

THE Campaign for Nuclear Disarmament (CND) has claimed that there is growing support to scrap trident among prospective Labour MPs.

An ongoing survey conducted by the campaign organisation has so far found a strong majority of Labour’s prospective parliamentary candidates oppose the renewal of the trident weapons system.

However, the survey has so far only been completed by 80 Labour candidates – 12 per cent of the total parliamentary group.

When questioned by CommonSpace, a CND spokesperson explained that the organisation is awaiting further responses from Labour parliamentarians, but had released early returns as a “representative sample”.

The Labour leadership currently supports spending PS100bn on new nuclear weapons, which has generated political opposition in Scotland where the weapons are based.

However, the rise in support of the SNP raises the possibility that renewal will be cancelled.

In relation to the ongoing survey, The New Statesman reported that “the new intake of [Labour] MPs is much less pro-nuclear than the one that it replaces”.

The Statesman cited Lou Haigh, Richard Burgon, Alex Sobel, Purna Sen, Nancy Platts and and Catherine West as examples of Labour candidates in the rest of the UK who oppose nuclear weapons.

CND’s general secretary, Kate Hudson, said: “These results show that Labour candidates are far more in-step with public opinion on this issue than the party’s leadership.

“The majority of the British public agree that squandering PS100bn on nuclear weapons at a time of deep austerity cuts and NHS crisis would be both morally reprehensible and economically disastrous – and it’s high time the Labour leadership caught up.

“Trident will be a key issue at this election, with MPs elected in May set to vote on its replacement in 2016. With many anti-Trident candidates across the major parties – including three-quarters of Labour candidates polled: Trident replacement is far from inevitable.

“The electorate now has a once-in-a-generation opportunity to ensure that the next Parliament is one that will truly represent public opinion and scrap Trident once and for all.”

The survey was also seized upon by the Scottish National Party (SNP) leader at Westminster, Angus Robertson MP, who pointed to the liklihood of a Labour-SNP deal that would cancel trident replacement.

Mr Robertson said: “This suggests a growing awareness south of the border that Scotland could well be in a powerful position in the next Westminster parliament by electing a strong team of SNP MPs – making scrapping the renewal of Trident entirely achievable.”

He continued: “An absolute priority for a strong team of SNP MPs elected in May will be getting Trident renewal halted. And the more MPs we get elected, the greater the chances of holding the balance of power and achieving the end of Trident, which will free up enormous resources.

“The cost of Trident renewal is some PS3bn a year, rising to PS4bn in the 2020s – and this money could and should be far more productively spent on health and education, including childcare.”

MPs will vote on the ‘main gate’ renewal of the trident submarine fleet in 2016. The cancellation of the project is a ‘red line’ issue for the SNP in any deal with the Labour party.