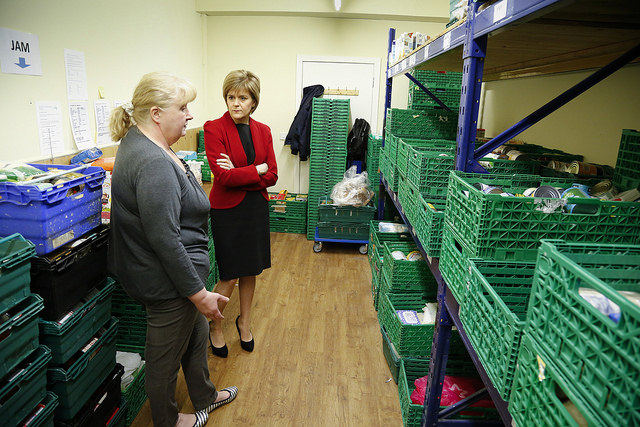 Use of foodbanks in Scotland hit all time high last year

Plans for a Good Food Nation Bill with a statutory right to food were recommended by a Scottish Government Good Food Commission, but they did not appear in the 2018 Programme for Government, and the Commission was dissolved.

In its place Rural Secretary Fergus Ewing published a ‘programme of measures’ in September, which is now being consulted on. The public consultation ends on 29 March.

To facilitate a response to the consultation, the Scottish Food Coalition – which includes among its members RSPB Scotland, UNISON and Oxfam – has organised a response mechanism on its website (click here).

Commenting, Professor Mary Brennan, Chair of the Scottish Food Coalition, said: “I urge everyone to respond to this consultation, the outcomes of which will shape how the Scottish food system is managed for generations to come. Scotland has an exciting opportunity to be world leading in placing food at the heart of all decision making. By doing so we can improve the quality, healthfulness, and environmental sustainability of our food while ensuring that those who produce and prepare it do so under fair, safe and secure conditions.”

The Scottish Food Coalition has five key asks for what any Good Food Nation Bill should incorporate:

The use of food banks in Scotland hit a record high last year, with over 170,000 three-day emergency food bank packages distributed, up 17 per cent on the year before.

Sixty-four per cent of Scottish adults are overweight or obese, and poor diets have been linked to poverty.

Lorraine Tulloch, Programme Lead for Obesity Action Scotland said: “For too long the people in Scotland have been suffering the health consequences of a poor diet.  If we want to address the accessibility, affordability and acceptability of a healthy diet then we need to see joined up action across the whole food system.  We must grab the opportunity that the Good Food Nation Bill offers to change our food system for the better and ultimately improve the health of the nation.”

Agriculture contributes to around 10 per cent of Scotland’s carbon emissions, with other environmental decline such as soil degradation and loss of biodiversity linked to intensive farming methods and chemical fertilisers. 30-50 per cent of global food production is wasted.

READ MORE: Colette Walker: Why every public kitchen in Scotland can and should have local organic produce

Dr Sheila George, Food Policy Manager for WWF Scotland said: “Globally, food production and consumption are key drivers of wildlife declines and climate change.  Scotland’s rich natural resources and less intensive farming systems mean we have huge potential to do things differently here, but we aren’t quite there yet.  The impacts of the current food system are cross-cutting and the solutions need to be too, which is why this consultation is so welcome.  The Good Food Nation Bill could be the catalyst we need to join up our broken food system and make healthy, environmentally sustainable food the norm.”

The Scottish Government consultation can be responded to directly (click here).

Introducing the Consultation, the Scottish Government website states: “Scottish Ministers remain committed to the concept and reality of Scotland as a Good Food Nation.

“A great deal of work is already happening now to make a real and positive difference to the lives of the people of Scotland: helping to improve their access to, and understanding of, the benefits of healthy local foods; ensuring sustainability of our wonderful food industry; and looking to grow Scotland’s reputation as a Good Food Nation from which other countries can learn.

“We believe we are well on our way to becoming a Good Food Nation, as the Programme of Measures published in September 2018 demonstrates.  While legislation is not the only way to make progress, we recognise that there is a clear place for legislation to underpin the considerable work that is already being done to realise our Good Food Nation ambitions.”