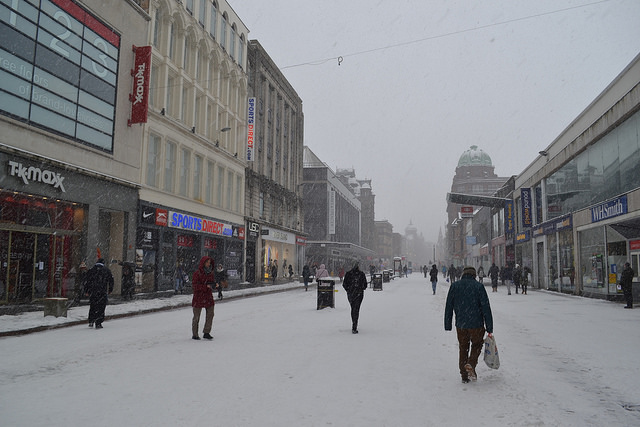 WITH MOST of Scotland suffering at the hands of the “Beast from the East”, the Scottish Trades Union Congress (STUC) wants to know if employers have been playing fair around workers’ ability and safety to travel.

The STUC and workers’ rights campaign Better Than Zero have said they have been “inundated” with messages from people who had no choice but to work through the severe weather warnings, including late on Wednesday night and early on Thursday morning when Scotland’s first ever red alert for snow being in place until 10am on Thursday.

A severe Amber warning remains in place at least until 10am on Friday 2 March and advice from the Met Office, Police Scotland and the Scottish Government is to travel only if absolutely necessary.

A survey has been launched by the STUC to gather more information on how workers have been impacted and which organisations have potentially breached their employees’ rights.

“Some employers will try to flout the law or will not know enough about workers’ rights.” Sarah Collins, Stuc

Speaking to CommonSpace, STUC policy officer Sarah Collins said: “We are gathering information about how workers have been treated by their employers in light of the recent weather conditions. We would like to hear the range of stories.

“From positive examples of employers closing the workplace in non-essential services and ensuring that staff do not have to endanger their lives to travel to work; to staff who felt that they would be disciplined or sacked if they did not go in to work or were not allowed to leave work.”

She continued: “Employers do have a duty of care to staff and staff should not suffer a detriment if they are simply trying to enforce their right to attend a healthy and safe workplace. However, as we know, some employers will try to flout the law or will not know enough about workers rights.

“It is up to every worker to make sure that they know their rights, speak to their colleagues if they think that a manager is making a bad or illegal decision, and join a trade union to get support in challenging the employer for their rights. They can get in touch with info@stuc.org.uk to find out which is their relevant union.”

Over the course of the week, Better Than Zero has put pressure on employers by sharing stories on social media of workers forced to stay on or come in early despite warnings, and called on workers to be aware of their rights in the circumstances.

RED ALERT: High street bosses are still insisting that staff must come into work despite the #BeastfromtheEast. In a trade union you have the collective power to challenge cold-hearted employers. Join us in Edinburgh tomorrow a.m. to spread the message – DM for more info. pic.twitter.com/7GwQkBkraF

“Employers have a duty to ensure the health, safety and welfare at work of all employees.” Better Than Zero statement

A statement published by the campaign explained that if employers ask workers to come in to work when it is unsafe to do so, they should state the following: “‘I am unable to attend work today due to the treacherous weather conditions which have made the roads unsafe to travel. According to the MET office there is still an Amber weather warning in place for our area meaning that there is a ‘risk to life likely’.

“This has been reiterated by Police Scotland who have urged people not to travel unless absolutely essential.

“In line with the Health and Safety at Work Act 1974, employers have a duty to ensure the health, safety and welfare at work of all employees. To compel me to work today would be a breach of the aforementioned legislation as I may be putting my life in danger to travel to work.”

While noting that employers are not required to pay workers unless their place has work has been closed by the employer, Better Than Zero has also urged those who think they should have been paid or have felt threatened by their employer to join a trade union.

An event on the Better than Zero campaign will be held on 12 March at the STUC offices in Glasgow, for those who want to learn more about organising against exploitation in the workplace, and a further event organised as a result of the treatment of workers during the snow alerts will be held at Unite the Union in Glasgow on 13 March.

Usdaw recommends following Met Office advice on whether or not it is safe to travel.” Usdaw shop workers’ union

Usdaw, the shop workers’ union has also urged employers to consider workers’ safety, stating: “We are calling on employers to adopt a sensible and pragmatic approach towards staff during this spell of exceptionally bad weather.

“We hope that employers will join with us in saying to workers that they must ensure they have a safe journey to and from work.

“Employers should have a weather policy in place that sets out what is expected of staff and what to do when snow and ice affects travel. Usdaw recommends following Met Office advice on whether or not it is safe to travel.”

Transport minister Humza Yousaf said on Thursday in light of the extended Amber warning: “The advice is to avoid all but absolutely essential travel. If you do travel there will be disruption, you may possibly get stranded.

“Please do not ignore travel advice. This is a severe Amber warning which means you could be putting yourself and others in danger if you travel.

“If you’re an employer we need you to be flexible with employees.”