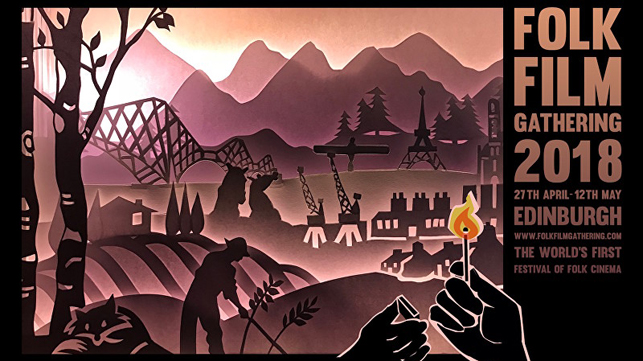 “I feel this notion of folk cinema is waiting to happen.” Following on from last year’s conversation with Jamie Chambers, director of the Folk Film Gathering, Scott Wilson sat down again with the director to discuss 2018’s event and folk cinema

MARKETED AS THE WORLD’S FIRST FOLK FILM FESTIVAL, ‘gathering’ may actually be the more appropriate word. The intention is not first-runs or exclusives. Chambers is a curator bringing together films he is attributing with the folk label, discovering resonances within films that enter into conversation with each other when placed side by side.

For this year’s event, he’s taking that even further by fully realising what he experimented with last year: every film will be preceded by a musical performance. “One of the things we try and do is draw connections between things,” Chambers says. “We’re trying to bring the music and the folk arts into greater proximity with the films.”

Opening night sees A Flyting of Screen and Sang, where traditional musicians will respond to a series of short and silent films from the National Library of Scotland’s Moving Image Archive. If folk cinema is a chorus of voices, then folk may as well be a coming together of expressive arts.

While Chambers feels the gathering becomes more organic year on year, he’s keen to keep pushing his conception of what a folk film festival might actually look like. There really isn’t much said about folk cinema in the canon, so what Chambers is doing is blazing a trail. Where one might fumble, he’s clearly having the time of his life trying to figure it all out.

“It’s more important than ever to think of Scotland resolutely as an international nation, with strong connections to Europe and beyond. We’re rooted in Scotland, the Folk Film Gathering takes place in Edinburgh, but we are trying to think globally.”

For this year, the focus is on a sense of place. “Place can be incredibly evocative, it can play a very important part in cinema.” Patrick Geddes’s “think local, act global” is an inspiration, and Chambers ties it to inspirational political movements in Scotland too. It’s impossible to separate Geddess’ words and a focus on place from a view of Scotland on the world stage.

“It’s more important than ever to think of Scotland resolutely as an international nation, with strong connections to Europe and beyond. We’re rooted in Scotland, the Folk Film Gathering takes place in Edinburgh, but we are trying to think globally,” he said.

So while a third or so of this year’s films are rooted in Scotland, it’s part of an international coming together. There are films from England, Alaska, Norway, France, Finland, and Italy, all with an equal voice.

“If we approach folk in the right way we can all be a part of it, a radical multiculturalism where difference is welcomed and celebrated. That’s definitely the sort of utopian, semi-imaginary space we’re trying to create where all cultures are invited to the table.”

Underpinning everything is this coming together. Chambers admires Hamish Henderson, and namechecks his Freedom Come-All-Ye. It’s inclusive; it’s international; it’s a gathering.

That’s not to say there’s no friction. There’s a hope to show the Bill Douglas Trilogy in the future, which Duncan Petrie has referred to as anti-folk. The second of the trilogy, My Ain Folk, is “about his desire to escape, escape where he’s from, and escape Scotland too.” Focusing on a sense of place doesn’t mean excluding those who tell stories of getting away, of avoiding becoming defined by that place.

“We’re interested in films that explore and celebrate notions of community, but I don’t think it’s a problematic thing to say any urban city is going to be riddled with tensions. There are going to be points of harmony and allegiances, and those things are to be celebrated, but there’s also points of dissonance.”

The interpretive nature of what Chambers is doing has fascinated me for the last year, and we talk again about my fears of a more sinister understanding. He separates his beliefs – folk – by labelling the exclusivity approach by another name: volk. “There’s the potential for them to swing the other way and become nativist, exclusivist, pure blood, us and them. We are the folk; you are not.”

So while he welcomes stories with tension, with problematic strands, it’s unlikely a Leni Riefenstahl film will appear in the programme.

“I do tend to programme films which I think have got a progressive political intent.” He continues “We’re interested in films that explore and celebrate notions of community, but I don’t think it’s a problematic thing to say any urban city is going to be riddled with tensions. There are going to be points of harmony and allegiances, and those things are to be celebrated, but there’s also points of dissonance.”

Chambers likens the politics of the word ‘folk’ to socialism, and it’s through that reading of the word the Folk Film Gathering flourishes. There is no arrogance behind his curating, but a genuine belief that sharing stories is a way of bringing people together. He namedrops his influences and inspirations, and would kill me if I didn’t mention Amber Films, a collective of working class filmmakers working and based in Newcastle. He’s the director of the festival, but knows it belongs to the folk.

Opening it up to the folk is an ongoing challenge – he’s corresponded with people around Scotland who want to attend but are unable to afford the trip to Edinburgh – but given the steps forward taken each year, I imagine it’s a challenge embraced by all involved.

This is very much a festival for us – all of us – and at its heart is a communal spirit of storytelling and inclusivity. Prior to its modern meaning, the word ceilidh was associated with a social gathering, and that encapsulates what the Folk Film Gathering is. It’s the romantic in me, but in ‘invoking the folk’, the festival recalibrates how we listen and talk to each other. Sae come aa ye at hame wi freedom, and be part of cinema that thinks local and acts global.

The Folk Film Gathering runs from Fri 27 April until Sat 12 May in Edinburgh. All screenings and times can be found here.