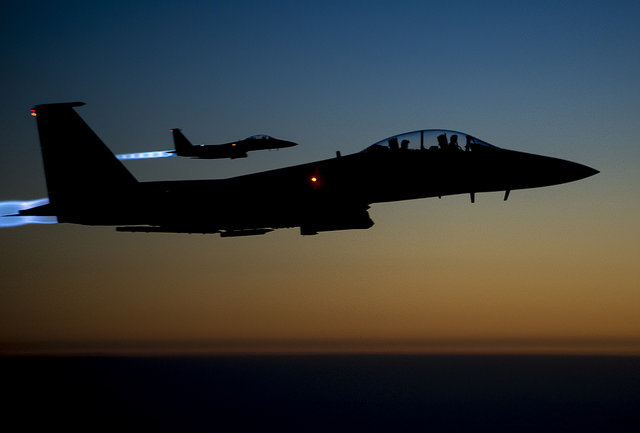 CONTROVERSY over the use of the Scottish Government-owned Prestwick Airport by United States military returned to the Scottish Parliament today [19 April], as First Minister Nicola Sturgeon was unable to confirm whether or not Prestwick had facilitated this month’s strikes against Syria.

MSP Ross Greer, external affairs spokesperson for the Scottish Greens, challenged Sturgeon at First Minister’s Questions on whether Prestwick had been used as part of the joint US/UK/French airstrikes against targets in Syria, an action which Greer argued “will only service to compound this conflict.”

Sturgeon offered an evasive response, apparently referring back to her previous statements on the US military’s relationship with Prestwick rather than offering a confirmation or denial of its involvement in recent operations.

Sturgeon said: “We have discussed the issue of Prestwick Airport and the commercial nature of what it does – and the fact that what it does in terms of military flights is no different than what it has done all along.”

“The First Minister did not answer my question. Was Prestwick used for the Syrian airstrikes?” Green MSP Ross Greer

Following their exchange at FMQs, Greer commented: “Earlier in the year, when we challenged the First Minister over the increasing role of government-owned Prestwick airport as a staging post for the US military, these concerns were laughed off with bizarre references to Elvis Presley.

“This week we see the SNP at Westminster rightly taking the UK Government to task for ordering RAF airstrikes in Syria at the whim of the US President, when alternative political solutions exist, namely sweeping sanctions. Yet at the same time SNP ministers are happy to enable US military operations through their airport.

“The First Minister did not answer my question. Was Prestwick used for the Syrian airstrikes?

“I suspect most Scots want to see peace in Syria, and many are already appalled that Scottish Government agencies give financial support to business involved in the arms trade. Ministers need to come clean about Prestwick’s role.”

READ MORE: Analysis: Why the strikes on Syria were illegal and why it matters

Greer’s inquiry followed a series of questions from other MSPs pertaining to the Syrian conflict. Sturgeon answered by reiterating her position that there is no military solution to the situation, only a political one.

Sturgeon went on to call for a “long-term, sustainable political settlement to the situation in Syria, and I think all of us have a part to play – many greater than those of us in this chamber.”

On 14 April, on the morning following the latest strikes against Syria, Sturgeon condemned both the Syrian Government’s alleged use of chemical weapons against a civilian population, and the decision of the UK Government to participate in the action, saying: “Air strikes by US and UK forces have not resolved the situation in Syria in the past and I am not persuaded they will do so now.

“This action risks not just further escalating the civil war in Syria but also a dangerous escalation of international tensions.”

The Scottish Greens have been vocal in their criticism of both the US military presence at Prestwick and the Scottish Government’s lack of clarity on the matter.

In February, Scottish Green co-convener Patrick Harvie MSP demanded that the Scottish Government reveal what active US military operations had been facilitated by the publicly-owned airport, following an investigation by the Guardian newspaper that revealed Prestwick had been used as a base for live missions by the US air force.

Speaking at the time, Sturgeon described the Guardian report as “a load of bunkum”.

While stating that “there’s been no contact whatsoever by the Scottish Government or Transport Scotland with the US military”, Sturgeon did acknowledge that Prestwick provides fixed-base operations and refuelling facilities for military flights, but said this was “neither new nor is it a revelation”.