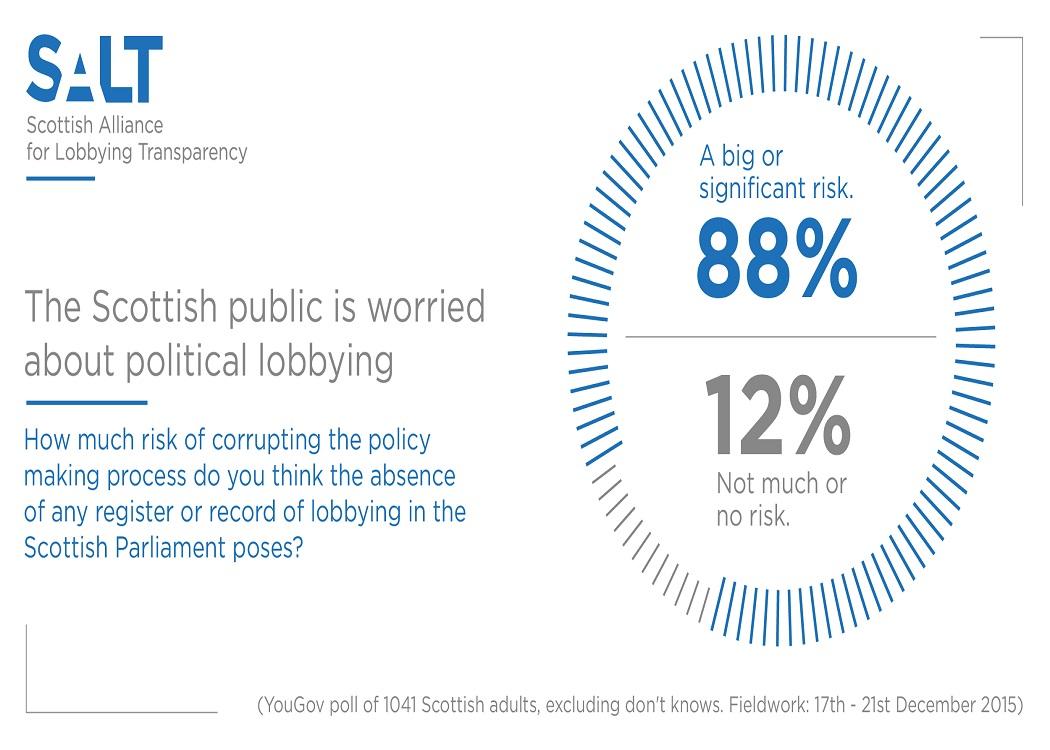 IN an open letter to MSPs, published this evening on Commonspace, think-and-do-tank Common Weal has called for the Lobbying Bill to cover electronic communications and those involving senior government decision-makers.

Common Weal, a member of the Scottish Alliance of Lobbying Transparency (Salt), said that a debate on the Bill tomorrow (7 January) is an opportunity for MSPs to pass “strong, world-leading legisltation which brings openess and transparency to the sometimes murky world of the lobbying industry”, and that strong reforms would “help reassure the citizens of Scotland that their Parliament continues to put them … ahead of commercial and vested interests.”

The letter comes in light of a recent poll which showed strong public support for transparency in parliamentary lobbying.

The YouGov poll, commissioned by Salt, found that a majority of Scots considered that the absence of a register of lobbying put policy making at risk of corruption.

Excluding don’t knows, 91 per cent agreed with the extension of the register to cover senior civil servants and political advisers; while 87 per cent wanted the remit to cover electronic communications, rather than just face-to-face meetings as the bill currently proposes.

The letter is published in full below.

Tomorrow (Thursday 7 January) you will take part in the first stage parliamentary debate on the lobbying bill. Symbolically and practically, this is an important moment for the Scottish Parliament. Our Parliament was set up with trust and transparency at its heart – and those two values have served it well. In comparison to the scandals that have hit other parliaments and the sense of resigned disappointment that is the norm in attitudes towards much of politics these days, the Scottish Parliament has performed well.

This is in part because of the way that you as politicians have carried yourselves and for that you are to be commended. But it is also because checks and balances have been built into Holyrood from the ground up which help and support you to be a parliament that people can trust.

Tomorrow you will have a chance to strengthen further that underpinning trust that makes the Scottish Parliament effective. By passing a strong, world-leading legislation which brings openness and transparency to the sometimes murky world of the lobbying industry you can help to reassure citizens of Scotland that their Parliament continues to put them and their collective interests ahead of commercial and other vested interests.

There have been some voices suggesting that this is all unnecessary, that there is no problem here, that this isn’t an important issue. But it is precisely this attitude – that the concerns of the public over transparency are silly and that a professional political class knows better than they do – which has led to so much cynicism towards politics.

It is certainly not a view shared by the Scottish public. Common Weal is a member of SALT, the Scottish Alliance of Lobbying Transparency. SALT commissioned YouGov to run an opinion poll on the lobbying bill. It found that 88 per cent (excluding don’t knows) thought that the lack of transparency over lobbying was either a big or a significant risk to Scottish democracy. And the calls for current proposals to be strengthened couldn’t be clearer – 87 per cent want email communication covered, 91 per cent want senior civil servants and advisors to be covered and 92 per cent want to see financial disclosure. These are remarkable numbers and must be heeded.

But above all, this is in your interest. The group you will most protect by passing stronger legislation is yourselves. You will send a clear message that you are not weak on transparency and that you want to be trusted. Sending that message alone will help to strengthen democracy in Scotland and to battle cynicism.

This is a particular issue for the party of government which inevitably becomes the target for lobbying and which as time passes will inevitably and unavoidably face conflicts of interest as former staff move into roles in the private and civic sector. Common Weal supports independence and a fairer Scotland. For those that support the same things, it is important that the Scottish Government does not get caught up in a potentially endless string of minor lobbying scandals. Strong transparency legislation will be the best possible defence against this.

But Common Weal also believes in pluralism and that democracy is served best when there is trust felt towards all politicians and all political parties. No-one is immune from the risks of lobbying scandals (particularly as some of you now have many former colleagues moving into the private sector) and everyone has an interest in strengthening trust in politics generally.

By supporting three simple changes – extending disclosable contact to email and other forms of communication, including senior civil servants and advisers and requiring basic financial disclosure – you can make this legislation some of the best in Europe. Everyone who cares about democracy has a reason to want this legislation to be strong and effective. Common Weal urges you to set standards that others follow.