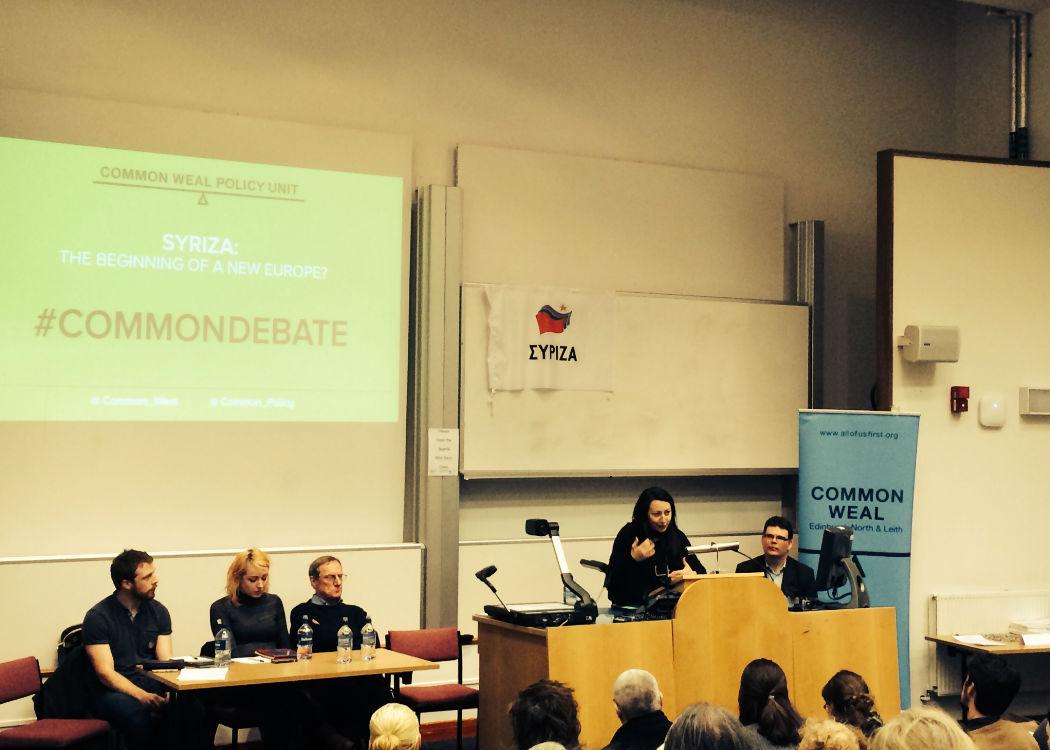 THERE was a snow blizzard outside, but inside last night’s #CommonDebate there was a different kind of blizzard; one of ideas, discussion and that most precious of things, hope.

Over 200 people crammed into the University of Edinburgh’s David Hume Tower to take part in a debate titled ‘Syriza: The beginning of a new Europe?’ and organised by the Common Weal Policy Unit.

The election of Greece’s new anti-austerity government has led to a heightened interest in alternative political and economic models and that was evident as the room was full 30 minutes before the start time. The event was streamed online by Independence Live and was watched by over 1,000 people.

Chairing the debate was Peter McColl, Director of the Common Weal Policy Unit and Rector of University of Edinburgh, who opened the evening to laughs when he said the Greek election was “the most exciting political event since last September”.

Dr Myrto Tsakatika, from Syriza Scotland and Professor of Politics at the University of Glasgow, gave an overview of Syriza’s history and also the party’s program for the future. “Everyone knows this will not be easy,” she said, but spoke of the party’s aims to call a debt conference, alleviate the humanitarian crisis and bring more democracy and decentralisation to the Greek state.

Addressing the issue of the coalition with the right-wing Independent Greeks, Dr Tsakatika said it was far from ideal, but Syriza had little choice and the alternative was another election.

The room was then addressed by Professor Michael Keating who gave an economic context of Europe, lamenting the predominance of failed economic ideas. These, he said, has become known as “neoliberalism, yet there is nothing liberal about them”.

“Austerity is simply self defeating and bad ideas are extraordinarily persistent”

“Austerity” said Keating “is simply self defeating and bad ideas are extraordinarily persistent.” Yet, speaking of the hope gained from the Syriza victory, he said that the “new political energy in Europe can deliver a change of ideas”.

The meeting also heard from Cat Boyd, co-founder of the Radical Independence Campaign and Gordon Maloney, President of NUS Scotland, who were both in Athens for the recent election.

Both spoke of the need to take inspiration from Syriza’s success and work to build a broad left alternative in Scotland. As Syriza was built out of social movements, said Boyd, Scotland too can build something fresh, with much of the groundwork laid from groups like the Radical Independence Campaign.

Questions and contributions from the audience ranged from discussions of the merits of Keynesianism to a debate over whether Syriza should accept to paying back any of the debt at all.

The event then finished on a rousing note. “Edinburgh is known as the Athens of North for its architecture,” said Boyd. “Let’s make that a reality for its politics as well.”

This was the second #CommonDebate this month following a discussion hosted by CommonSpace on media ethics and responsibility in the wake of the Charlie Hebdo killings.