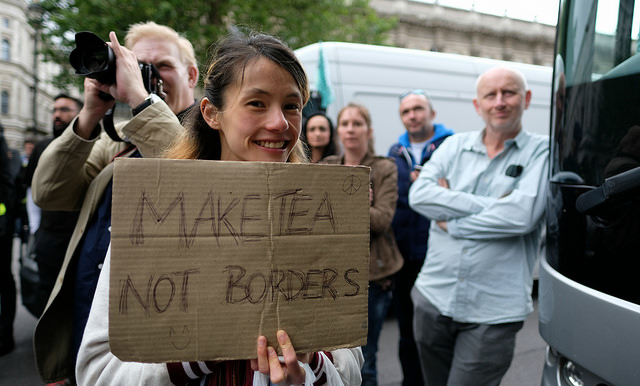 Campaigners gathered in Edinburgh last night to call for the French and UK governements to give protection to unaccompanied refugee children, and today’s #CommonDebate question was: ‘As the first refugee children arrive in the UK from Calais, how can Scotland further improve care and provision for refugees?’

One user who responded felt that an independent Scotland would provide improved care and support for those seeking refuge:

Another user questioned how far the Scottish Government would be able to act on the refugee crisis within the limits of devolved powers.

@TheCommonSpace I'm not sure when ScotGov will hit the limits of devolution on this. Probably quickly. It should push against them hard.

Devoting resources to training and developing of existing care systems was one suggestion offered by this user:

One respondent linked the arrival of children from Calais to recent stories in tabloid media questioning the status of the unattended refugee children, but other users highlighted the negative media reception as an issue in itself.

@TheCommonSpace Show photos of the "children"

Finally, one user pointed to provision of housing as an area on which Scotland should focus:

First you provide homes for everyone on a waiting list, then you build settlements for refugees @thecommonspace