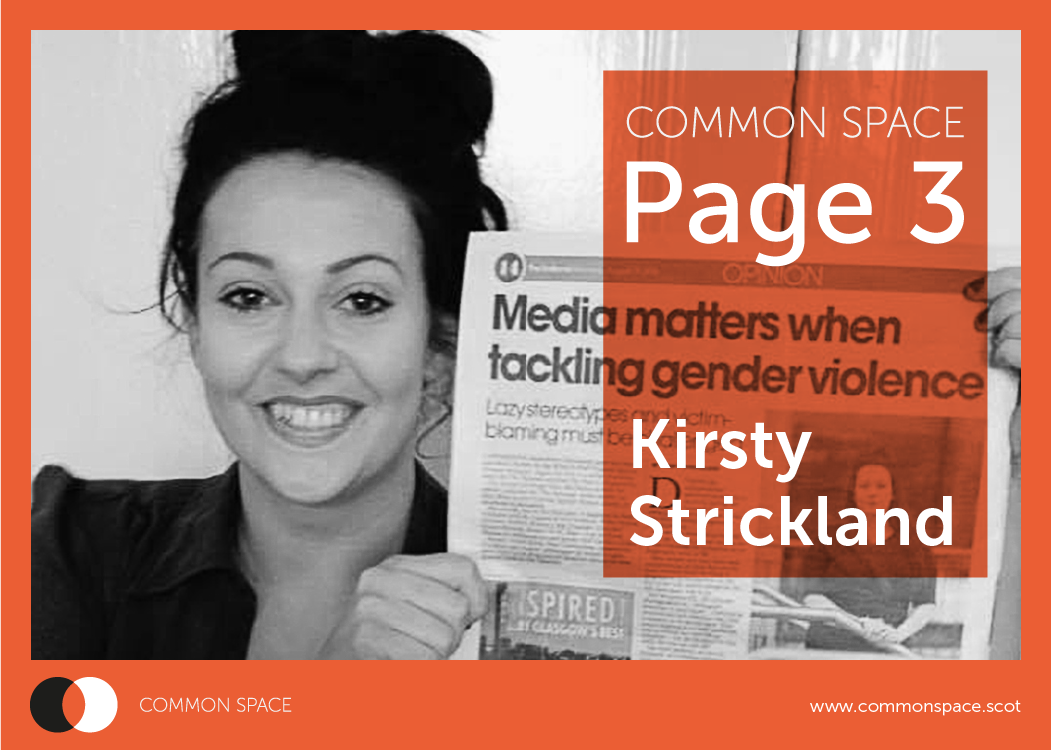 In the first part of a brand new feature celebrating women for the brilliant work they’re doing instead of their wardrobe measurements, Kirsty Strickland from Glasgow graces CommonSpace’s very own alternative Page 3

KIRSTY STRICKLAND, mother to a young daughter, recently won a bursary from the Write to End Violence Against Women Awards campaign and for the last few months has been penning articles for The National newspaper, which you can have a look at here .

Kirsty, who did not come from a journalistic background before winning the bursary, says: “I was so proud to be chosen as the bursary winner for the Write to End VAWA . The annual awards recognise that there are journalists and newspapers that understand the complex nature of the violence that women face – and that there are those who unfortunately fall short.

“The way that rape, domestic violence and harassment is presented to us in the media can create damaging misconceptions and act as a barrier to justice.”

It was after Kirsty’s daughter, Orla, was born in 2014 that she became an active feminist campaigner. She even hit the headlines that same year after setting up a petition calling for BBC radio presenter Nick Conrad to be sacked when he said women should “keep their knickers on” to avoid being raped.

“It wasn’t until after the birth of my daughter that I really became an active and vocal feminist,” Kirsty explains. “I’d spent my pregnancy fretting about whether my fried egg was too runny and wondering if it was safe to eat shellfish.

“Those fears paled into insignificance when Orla was born. We shared the ward with other baby boys and girls who were having their first suckle at their mother’s breast. I imagine we were all making the same whispered promises to our tiny new humans: “I love you – I will keep you safe.”

“I gazed into my daughters grey, trusting eyes and felt the weight of my responsibility to her. Girls grow up to be women. Two women a week are killed by a partner or ex. One in four women has been raped.

“I know that by virtue of the fact that I gave birth to a girl that I’ve got work to do to keep my promise.”

She adds: “Violence against women is a festering, stubborn, evolving abscess on Scottish society. We can all encourage change, and challenge our media to play its part on mitigating the harmful impact that perceptions can have.

“Media is mighty. If we improve it, we can hope to improve the odds on the safety of all of our girls as they grow into women.”