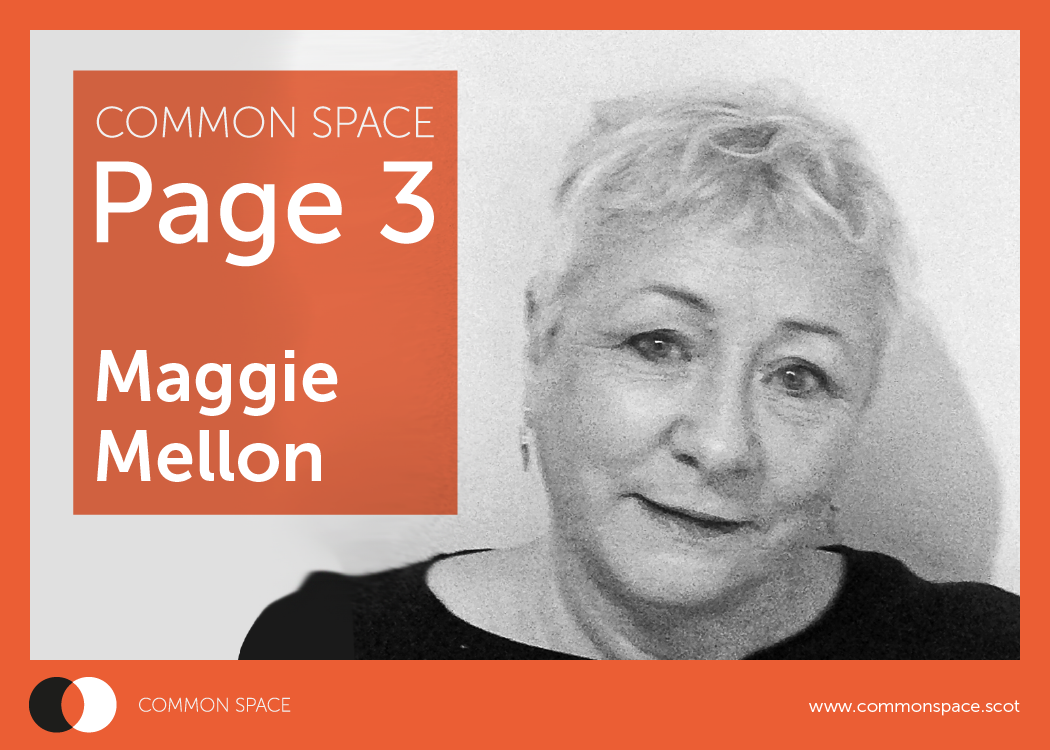 Along with a fellow activist, Maggie moved the initial Women For Indy motion to oppose plans for a new women’s super-prison in Scotland, kickstarting a campaign the organisation eventually won when the Scottish Government dropped the plans under pressure.

Here, Maggie tells us more about her political journey.

I was very political in my 20s – I had spent my teens reading about class, race, war, fascism and liberation struggles, and my hero was Angela Davis. My father was a socialist, and a child of the horrific conditions of the early 20th century in Glasgow.

He had rickets, he sometimes had to beg for a slice of porridge from the highland woman upstairs. His mother took part in the rent strike. He remembered being taken to Glasgow Green to hear John McLean and the other socialist speakers during the war.

I’ve never been in any doubt about the capacity of Scottish landlords and Scottish employers to screw every penny they can out of their fellow countrymen, or of Scottish judges to lock them up if they objected.

I spent a decade or more very politically active – supporting the national liberation movements, the civil rights movement in the USA, the miners strike, CND, anti-racism, Chile and domestic struggles here: the miners, Dundee Singers strikers, Grunwicks, Ireland, anti-apartheid. I was one of the organisers of the non stop picket outside the South African Embassy in London.

I was in hospital for a couple of weeks having my second child and that’s when it really hit me that I was a woman and that women were really pretty great. Two weeks of almost wholly women’s company, women of all races, many different backgrounds, experiences, opinions – it was an unforgettable experience. I still remember a lot of the women and their stories.

A community of women who were in for longer than the standard three days developed. We had to stay while the other women came and went. One day we realised that a woman in early labour was handcuffed – to a very stony faced prison guard. All on her own, in pain, and totally isolated.

The word went round, probably from the nurses, that she was to give birth and then be taken back to Holloway without her baby as there was no room in the mother and baby unit. We were all completely horrified, and me and a couple of other women decided that that just could not be allowed to happen.

I felt a bit disillusioned with politics and the idea of sitting in a meeting, and having a pointless argument about some aspect of dogma or doctrine, just made me feel completely allergic to getting involved again.

We threatened a sit-in at the ward doors, and called the press; someone had a friend on the Guardian. It never needed to come to anything – they caved in and found her and her baby a place in a prison out of London.

There followed a period of just raising the boys, working, family life, and the world seemed a bit hopeless. I felt a bit disillusioned with politics and the idea of sitting in a meeting, and having a pointless argument about some aspect of dogma or doctrine, just made me feel completely allergic to getting involved again.

Then along came the referendum. I realised I was for Yes. And after a very doubtful start, the campaign took off, out of the control of the SNP. Suddenly I felt completely involved again. It was like being part of a wonderful carnival of ideas and idealism, and hope.

Women for Independence was just so easy to hook up with. I did not go to a single organising meeting, though – I just pitched up when they were doing things and got stuck in.

So we lost, but we won. The first WFI meeting I went to was their Christmas do after the referendum. I went intending to bring up the idea of opposing the building of the women’s prison. And me and another woman did just that. We passed a motion opposing it (just like the old days) and it was agreed to campaign.

And we did. And it became a national WFI issue. And then we won. There will be no big women’s super-prison.

Then along came the referendum. Suddenly I felt completely involved again. It was like being part of a wonderful carnival of ideas and idealism, and hope.

However, there is a much bigger and longer battle to fight – women who come before the courts and end up in prison are actually casualties of all of the worst that Scotland has to offer – violence, poverty, sexism, illness, cruelty. They have been let down by every service that should have looked after them – care system, health, education, police, social security, housing.

Then we put them in prison when they annoy us with their bad behaviour, their helplessness, their homelessness, their drinking, their vulnerability to exploitation.

If we leave the justice system to go on with business as usual we will still have women suffering injustice and being sent to prison. We send far too many men and women to prison for non-violent and often trivial offences. Most of them are poor. Go figure, as they say.

So now WFI is launching Justice Watch – we are organising women to go into courts in Scotland to watch justice in action, to educate ourselves, and then to come out and educate our friends and families, and the public.

Women for Independence was just so easy to hook up with. I did not go to a single organising meeting, though – I just pitched up when they were doing things and got stuck in.

We think that the public would not support what is done in our name and would be incredulous about the amount of money that it costs to do the wrong thing instead of the right thing.

This is something that the Scottish Government has almost complete control over and does not need extra money or powers to tackle. It just needs to do things differently.