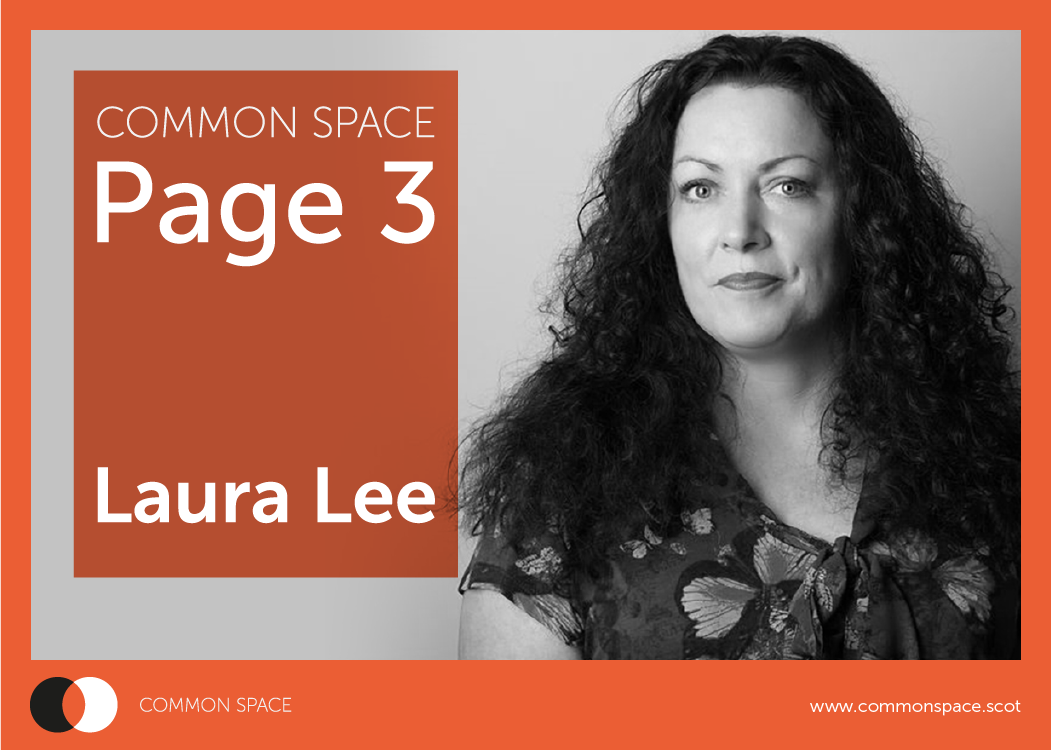 In the latest of our series on inspiring women , we meet sex workers’ rights campaigner Laura Lee, who is currently taking on the Northern Ireland authorities

An increasingly prominent voice for those in the sex work trade and a prolific tweeter, Laura ‘outed’ herself in order to further her campaigning work, which currently includes taking on the authorities in Northern Ireland over legislation making it an offence to pay for sex.

Here, Laura tells CommonSpace about her work and her motivations.

IMAGINE my bewilderment when CommonSpace told me they were running a piece on inspirational women and wanted me to contribute. Michelle Mone must have been busy, because here I am.

So, how does a woman who was educated by Irish nuns end up suing the Northern Irish Government to have sex workers’ rights realised? Bit of a story, that, and although I was told there was no word limit for this piece I’m sure we could all do without the infinitely sexier version of War and Peace.

In 2003, I moved to Scotland to take up a position with a financial institution, corporate prostitution at its finest. Over time, my part time endeavour to top up my miniscule salary became known, and the proverbial hit the fan.

I got angry. I was angry I had to leave the town for my daughter’s sake and start afresh. I was angry for being judged, by the very people who’d come to me for help in the past.

In a small highland town, that’s better than a double live episode of Eastenders and various locals couldn’t wait to make their views known. Some were to my face, but mostly it was done on social media, by members of staff during a ‘confidential’ investigation.

My then partner ran for the hills when the going got tough and the final straw came when a man who had just been released from prison for sexual offences against minors was welcomed back with open arms. “Leave him alone, he’s done his time.” Consenting adults? Wickerman experience. (It should be noted that a steadfast group of local women stood by me, and we are still very best friends to this day.)

I got angry. I was angry I had to leave the town for my daughter’s sake and start afresh. I was angry for being judged, by the very people who’d come to me for help in the past. But mostly, I was angry that many people spouted speeches about the sex industry, when they quite obviously didn’t have a clue.

Of course, I’ve since learned that some people build entire careers on that, but that’s another day’s work.

I’ve joined various sex worker support and campaign groups over the years, and made the decision to ‘out’ myself to further my advocacy, on my terms this time. It’s not a decision I’ve regretted, apart from the realisation that I look 72 on television.

With any minority group, it’s very important to have representatives, but given the nature of the sex industry and the stigma attached to it, that’s very difficult, I know that. But I also know that I have the support of many, many sex workers because they email me and tell me regularly.

With any minority group, it’s very important to have representatives, but given the nature of the sex industry and the stigma attached to it, that’s very difficult.

As a representative I’m not perfect, but then no-one is. By far my favourite faux pas has been arguing with Lord Morrow of the DUP on national radio and indignantly declaring: “We are not going to take this lying down.” Whoops. I was of course referring to the law which came in last June in Northern Ireland making it an offence to pay for sex, but still legal to sell.

My case challenging that law is coming up for hearing shortly. I’m sorry it had to come to litigation but all other avenues have been exhausted and sex workers are in danger.

In Scotland, it remains perfectly legal to buy and sell sex, but what you probably don’t know is that we’re not permitted to work together for safety. One sex worker in an apartment is permissible but two or more together is deemed a ‘brothel’ and we can be charged with ‘pimping’ from each other, have our phones and cash seized, and enjoy a life with a criminal record. No other occupation that I can think of in the UK compels a woman to work on her own with the general public.

Our rights are my life, and will be long after I hang up my thigh high boots.

Last year, Jean Urquhart MSP launched a consultation to bring forward a Bill for the decriminalisation of all of the archaic laws around sex work to allow us labour rights like any other industry. The responses came in from around the world.

Decriminalisation is recommended by leading authorities such as WHO, UNAIDS and Amnesty International. To be clear, no-one is asking for an all singing, all dancing Nevada-style brothel in the middle of Falkirk, just the right to work discreetly, as we do, but in pairs or more.

Our rights are my life, and will be long after I hang up my thigh high boots. This should never really have to be said, but we deserve the right to work in safety and dignity. It really is that straight forward.