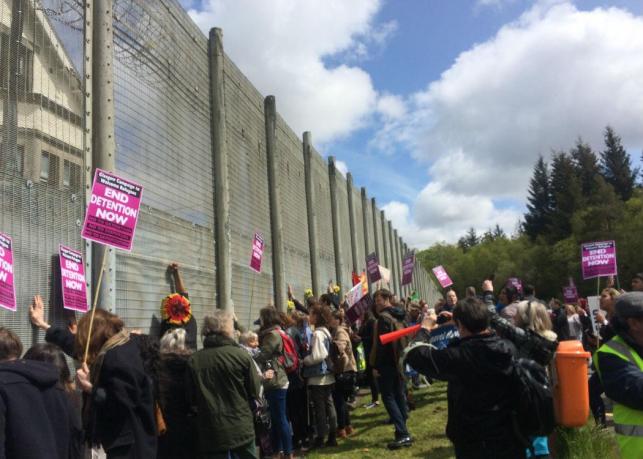 JOURNALIST AND PRODUCER Liam O’Hare won the award for ‘Best Broadcast/Film’ at the Scottish Refugee Council media awards for his CommonSpace film ‘Behind the Wire’, which tells the story of those detained at Dungavel – Scotland’s only refugee detention centre.

The film, which includes testimonies of those held in the centre despite trying to escape violence and hardship, was recognised for highlighting the voices of those facing injustice and rendered unwanted by the British state.

The prison conditions of Dungavel have been an epicentre of calls for justice, and opposition to racism and mistreatment of asylum and refugee communities. It has faced repeated protests – both inside and outside it’s high, barbed wire fence – amid demands for it to be closed for good.

Behind the Wire from Liam O’Hare on Vimeo.

Commenting on the award, O’Hare told CommonSpace: “I would like to thank the Scottish Refugee Council for this award – it’s wonderful that such an event is hosted and it’s an honour to be mentioned among some of the other great work done on this issue. I also want to pay tribute to the people who shared their stories for this film – including Pinar Aksu who accepted the award on my behalf.

“It’s difficult to imagine the mental anguish that people in detention face and I’m very grateful for their bravery in sharing their stories. Myself and Eoin wanted to amplify the voices of those living in detention and hopefully the film helped do that in some small way. Lastly, I want to say thanks to Frankie Boyle, without whose help the film would not have been possible.

“At its core, I believe journalism should be about holding power to account. There is hardly a more ugly manifestation of power than locking people up purely because they don’t fit the criteria for being welcome in Britain. Dungavel and the other detention centres across the UK should not be allowed to slip out of the public gaze. Hopefully the work we can do collectively will go some way to ensuring that doesn’t happen.”

Read more – Behind the Wire: Inside Dungavel – an exclusive short film

Journalist Eoin Wilson was in charge of photography for the film.

O’Hare reported in writing for CommonSpace on the Dungavel Detention Centre hunger strike in March of 2015, from protests demanding its closure, and on the refusal of the Tory Home Office to grant a civil-society inspection of the prison, before moving on to other work in the media. ‘Behind the Wire’ was published on CommonSpace in December 2016, at the height of the refugee crisis.

Dungavel remains open, with a capacity of several hundred detainees, after plans to replace it with a new detention centre near Glasgow Airport also faced protests – and were rejected by Renfrewshire councillors.