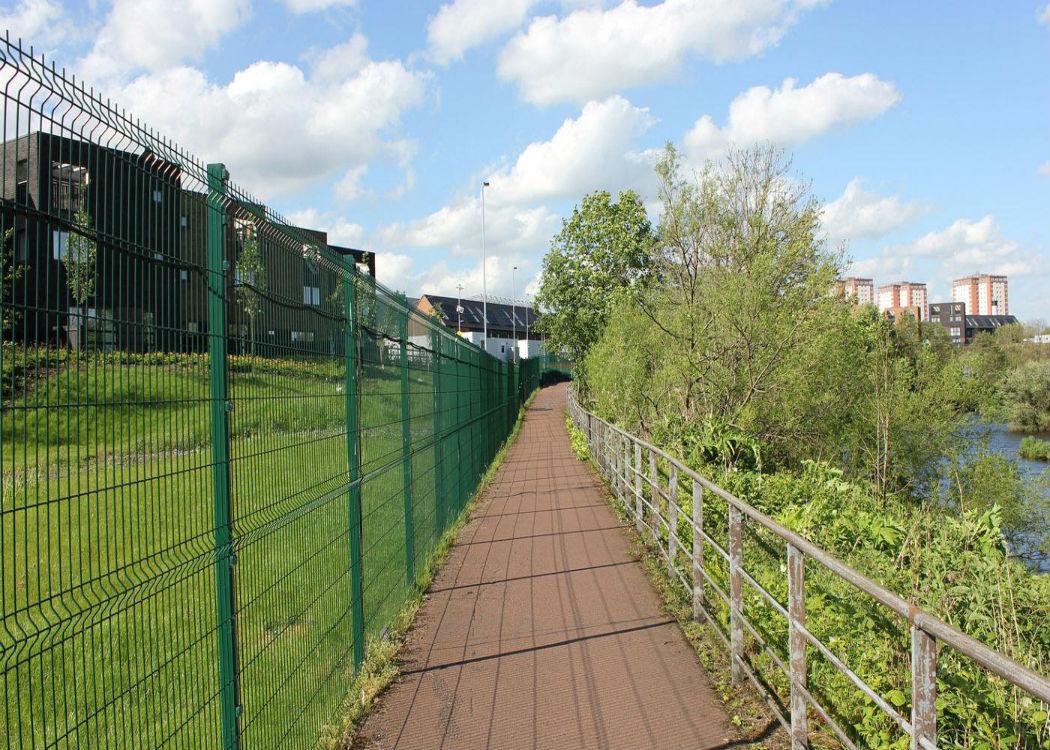 I get off the train and walk up the stairs, looking at the dashing new turquoise roof on my way. As I exit the station, I can see the various shades of grey of the Sir Chris Hoy Velodrome just in sight behind a cluster of leafless trees. I look to my right and see tarmac as far as the eye can see. A huge car park sits completely empty. About 100 metres behind it, with only vast space in between, I can see advertising hoardings with modern-looking housing behind which made up the Athletes Village during the Glasgow 2014 Commonwealth Games. This is ‘the legacy’; in all its barren, bleak wonder.

“It’s just desolate, isn’t it?” Grace Harrigan’s first words contain the adjective I had been searching for. We stand looking at where the Accord day care centre used to be – right in the middle of what is now an empty car and bus park.

“I think it’s just used for Celtic games now. Most of the time there’s nothing there,” Grace adds.

“That’s what our day care centre was knocked down for?” Helen McCourt queries rhetorically.

I first met Grace and Helen three years ago during their campaign to save the Accord Centre in Dalmarnock. The centre provided trained staff with planned learning and activities for adults with learning disabilities. Their son and daughter respectively had been going to the centre for years. When they were first informed it would be knocked down to be replaced with a car park for the Games, they were promised they would have a new centre built, and that they could draw up a proposal for what they needed.

“So we drew it up, people from the council came to see it; they took it away with them and seemed happy,” Grace explains. “It was the acting head of the council who came, Jim Coleman. Then we didn’t hear anything for two years. Next thing, someone from social work comes to tell us the new day care centre’s not happening. Then we get told we’ll get space in the new buildings that are being made for the Commonwealth Games. Nothing. Then they say we’ll get a council-run building in Barrowfield. Nothing. Then they tell us we’re getting nothing.”

A day care centre for people with learning disabilities was taken away with no like-for-like replacement after several promises to the contrary in order for a car park to be built in its place. Is this really the legacy?

Gordon Matheson, current head of Glasgow City Council, is in no doubt about the legacy of the Games in Dalmarnock. On the official website, he states that Dalmarnock has been “transformed” and the project “exceeded all expectations”.

He’s not the only one waxing lyrical about the Athletes Village in particular. On 3 December, exactly four months after the end of the Games, the SURF Awards took place, hosted nationally by the Scottish Independent Regeneration Network in partnership with the Scottish government to award regeneration best practice. ‘City Legacy – the Athletes Village’ was one of three projects up for the award for infrastructure and social benefits, although it ultimately lost.

A PR spokesperson for ‘City Legacy – Athletes Village’ said the organisation was pleased about the award nomination, adding that the project was “undoubtedly” a success story for the East End. Others, however, doubt the Athletes Village legacy.

“There has been a complete lack of community engagement right from the start.”

Neil Gray, urban geographer and co-founder of ‘Glasgow 2014 Games Monitor’, says he found the suggestion that Athletes Village was an example of ‘best practice’ in engagement and cooperation “vile and disgusting”.

“The thing that angers me is the people who have been subject to blight and disinvestment for 30-40 years, they’re not going to have any benefit from this ‘transformation’,” he says. “There has been a complete lack of community engagement right from the start.”

Gray explains that the City Legacy Consortium made up of four companies – CCG, Cruden, Mactaggart & Mickel Group and WH Malcolm – obtained the site from the council at no cost and entered into an agreement with it, of which the details are not publicly available. Around PS25m of public subsidy was spent on remediating land, demolition of existing housing, and compensation to land owners.

“Despite the fact that the council has essentially paid for all the costs, the figure of new homes at the Athletes Village site has been reduced from 1,400 to 700,” he goes on. “Of that 400, 200 are run by Thenue Housing Association, who say that their homes are only for people in work, making it even more unlikely those taking up residence will come from Dalmarnock with its high levels of economic deprivation.”

The original claim by the Clyde Gateway Project – which is responsible for the Games’ regeneration plans – was that 10,000 new homes would be built, but now Glasgow City Council leader Gordon Matheson boasts on the Legacy website that only “700 families” have moved “into new homes in Dalmarnock”.

The history of the Athletes Village has been controversial. The high profile eviction of Margaret Jaconelli in 2011 was one notable incident. Jaconelli was the last remaining resident in one tenement housing scheme after most had left in 2002, and she refused to accept a PS30,000 offer from the council on a property independently valued at PS90,000.

After a long, public campaign against the compulsory purchase order, at 5am on Thursday 24 March 60 police officers broke down her door and evicted Jaconelli and her husband. Soon after, the sand stone tenements, which had been identified in a stock survey in 1999 as being in very good condition, were demolished to make way for the new Athletes Village.

But the biggest media furore over regeneration and the Commonwealth Games was yet to come. In April, Glasgow City Council announced plans to demolish the Red Road flats in the north-east of Glasgow and turn the event into a major spectacle for the opening ceremony of the Games.

After over 17,000 people signed a petition against the council’s use of the flats for public spectacle the decision was overturned, but the impression of an approach to regeneration that was insensitive and publicity-driven remained.

Gray argues that the whole lexicon of ‘regeneration’, ‘legacy’ and ‘the new East End’ are ways of sugar coating what is really “gentrification and displacement”.

“I remember seeing the sign and I think it read ‘The New East End: a brand new community’ with the word ‘new’ emboldened,” he says. “What that means to people is that this isn’t going to be the people who were here before, this is going to be different; those people are going to be gone. It’s offensive, and people I spoke to who have lived in the community for years found it offensive because they knew exactly what ‘the new East End’ really means.”

“They knew exactly what ‘the new East End’ really means.”

‘Regeneration’ has become a dirty word for Grace and Helen, too, who can’t understand why anything to do with the Games would be up for an award for helping the community.

Asked whether she thought it would be apt to describe Athletes Village and the Clyde Gateway regeneration process as a whole as having ‘productive community engagement in the planning process’, Grace and Helen both laugh: “Ask Margaret Jaconelli that,” Helen says.

Now the majority of those who used to go the Accord travel to different community centres across Glasgow every day. Grace says that where before they had a diversity of activities and trained staff with a structured plan to keep them engaged and learning, now it’s “just a roof over their head”. “Now it’s just an institution,” Helen adds.

They say that every day they have to pay PS5 for food and “in case anything gets broke”. On top of that, PS27.50 now gets taken off their weekly benefits to pay for care services, which they call the ‘care tax’.

Undoubtedly, the SURF awards programme contains projects across Scotland which are genuinely inspirational and community-led. The project that won in the social and infrastructure benefits category was called Every1’s Garden, a garden space for everyone in the community to grow their own fruit and vegetables in the heart of Dundee, on what was previously a derelict builders yard. But the very fact that ‘City Legacy – Athletes Village’ was up for an award for best practice leaves, for many, a bitter taste.