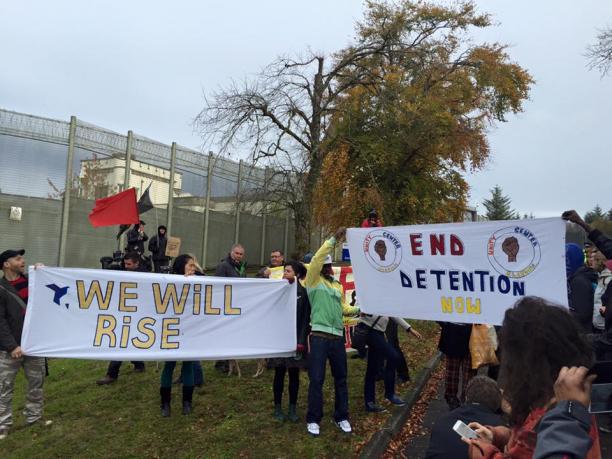 According to figures obtained by BBC Scotland’s The Nine and published last week, at least 21 under-18s were held at Dungavel between 2010 and 2018, despite the UK Home Office pledging to end the practice in 2010, when former immigration minister Damian Green gave the UK Government’s “commitment to ending the detention of all children for immigration purposes”.

Freedom of Information figures have shown that 19 under-18s have been held at Dungavel since 2014 – including at least five below the age of 16 – with one spending almost three months at the South Lanarkshire facility.

Dungavel has been the subject of numerous controversies surrounding the deaths and reported suicide attempts of detainees, as well as alleged human rights abuses.

In September 2017, CommonSpace revealed that a Chinese national had been found dead in Dungavel, prompting an independent investigation, while 2018 saw a hunger strike and rooftop protest from detainees, one of whom told CommonSpace: “What can I do? They are killing me here. They are keeping people for a long time here, for no reason.”

The latest revelation has led to calls for a full investigation by the UK Government from Labour MSP Monica Lennon and SNP MSP Linda Fabiani, who raised the matter at First Minister’s Questions.

“If children are still being detained at Dungavel a decade after the Home Office committed to ending this appalling practice, it would be completely unacceptable, and a clear contravention of stated Home Office policy.” Deputy First Minister John Swinney

Standing in for First Minister Nicola Sturgeon, John Swinney said: “If children are still being detained at Dungavel a decade after the Home Office committed to ending this appalling practice, it would be completely unacceptable, and a clear contravention of stated Home Office policy.”

“The Scottish Government is continuing to seek clarity from the Home Office regarding the detention of children in Dungavel,” Swinney added.

Swinney also highlighted the all-party agreement reached during the 2014 Smith Commission and included in the Smith Agreement that the operation of asylum support should be devolved – a proposal that was never put into practice – and criticised the Conservative government’s ‘hostile environment’ policy, which he characterised as a “scar on the reputation of the United Kingdom.”

Swinney said: “As a consequence of that, the Scottish Government held a number of discussions at official level with the Home Office in relation to the Smith Commission’s proposals on asylum.

“Despite the recommendations made by the Smith Commission, the Home Office refused to accept the case for devolving asylum accommodation, financial support and advice, or on the question of being able to launch an asylum claim in Scotland, so that would provide for a more dignified, humane system.

“Now I suspect that the fact we were unable to make progress on what was an all-party agreement of the Smith Commission, agreed by all party participants in the process, should perhaps come as no surprise to us, given the fact that the Home Office has been continually criticised for creating a hostile environment in this area of policy, which services none of us well, and is in my view a scar on the reputation of the United Kingdom and its welcome to people who face jeopardy in our world.”

READ MORE: Scottish Parliament hears calls for more to be done to protect the vulnerable from Home Office immigration law

As leaked early drafts of the Smith Commission revealed in November 2014, plans to give the Scottish Government greater control over the treatment of asylum seekers were removed “in the final couple of days” due to pressure from Scotland’s unionist parties.

Ahead of Swinney’s remarks at FMQs, Fabiani commented: “This is the harsh reality of the Tories’ ‘hostile environment’ – children and pregnant women held in what is effectively a private prison.

“The UK is the only country in the EU which has no cap on the length of time somebody can be detained under immigration powers. Innocent families, women and children shouldn’t be held like this for months on end, especially almost a decade after the Home Office promised to end the practice of detaining children.

“The UK Government must urgently stop detaining children and pregnant women at Dungavel – a facility entirely unsuitable for people in such a vulnerable position.”

Monica Lennon also commented: “We were told this disgraceful practice stopped in 2010 and it is extremely disturbing to learn this is untrue.

“Scottish Labour are calling for a full and transparent investigation, and reassurances the practice of detaining children will be ended immediately.”

“This is the harsh reality of the Tories’ ‘hostile environment’ – children and pregnant women held in what is effectively a private prison.” SNP MSP Linda Fabiani

A Scottish Government spokesperson said: “The routine detention of children for immigration purposes was supposed to end in 2010. For children to be detained in this manner at Dungavel almost a decade later is unacceptable.

“It is harmful to the health and wellbeing of both children and adults, as well as their ability to integrate into the community following release, and we will continue to press the UK Government to deliver more humane and flexible asylum and immigration systems.”

Responding to BBC Scotland’s initial report, a Home Office spokesperson said: “We ended the routine detention of children for immigration purposes in 2010, and fundamentally changed the system to ensure that the welfare of the child is at the heart of every decision we make.

“However, we will not operate a system open to abuse and must avoid a situation where legitimate immigration control can be undermined by someone simply claiming to be a child.”

CommonSpace is entirely funded by regular, small donations from you: our readers. Become a sustaining supporter today.