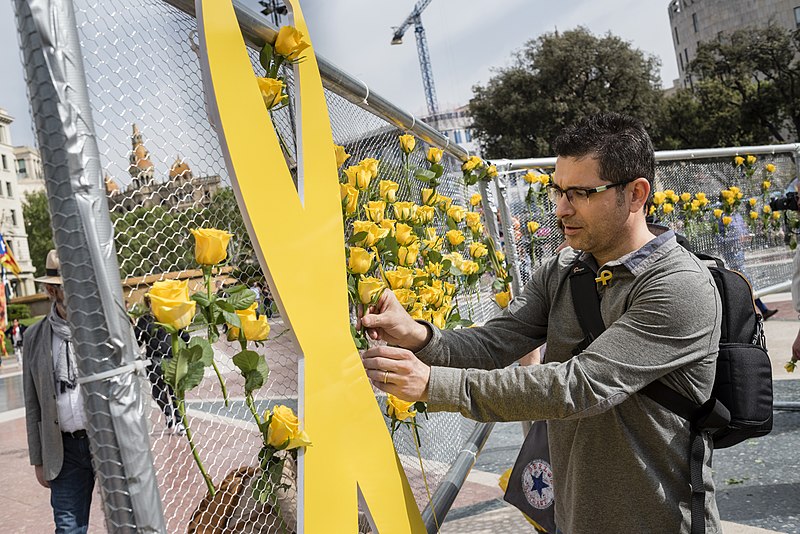 CATALAN President Quim Torra today [18 November] faced a disobedience trial over his failure to comply with an order from the country’s electoral board to remove symbols of solidarity with Catalan political prisoners from government buildings.

If found guilty by Catalonia’s top court in Barcelona, Torra could be removed from office and sacked as the head of the Catalonia’s government. The trial was described as a “farce” by a Catalan Government spokesperson who criticised the use of the courts to solve political disputes.

The president is being prosecuted for failing to remove yellow ribbons from a government building during the run-up to the Spanish General Election in April.

Yellow ribbons have become a symbol of solidarity with Catalan politicians jailed by the Spanish Supreme Court over the outlawed Catalan independence referendum in 2017, nine of whom were given sentences ranging from nine to 13 years last month.

Torra told the court earlier today that he disobeyed the order because he thought it was illegal and infringed on the right to freedom of expression, arguing: “Complying with an illegal order was impossible.”

He refused to answer questions from the private prosecutor representing the Spanish far-right Vox party, saying: “Vox is a Francoist party, this country suffered 40 years of fascist dictatorship.”

The Catalan News Agency reported that “a few hundred people” gathered outside the court building in support of the president.

“It should be votes that remove or elect presidents, not the judiciary,” says spokesperson of anti-austerity Catalunya en Comú, Joan Mena, on Quim Torra’s trial

Speaking to Catalan News, Catalan anti-austerity politcian Joan Mena said: “It should be votes that remove or elect presidents, not the judiciary.”

The case has seen Torra become the first Catalan president to face trial since the Franco regime tried Lluís Companys in 1940, and coincides with Spain’s attempted deportation of other political leaders involved in the 2017 referendum, including St Andrews University academic Clara Ponsati.

Spain abandoned its 2018 attempt to have Ponsati extradited on charges of sedition, but issued yet another European Arrest Warrant on 5 November 2019.

The warrant was returned to Spain the next day for clarification, with Ponsati released on bail ahead of another court appearance in Edinburgh on 12 December 2019.