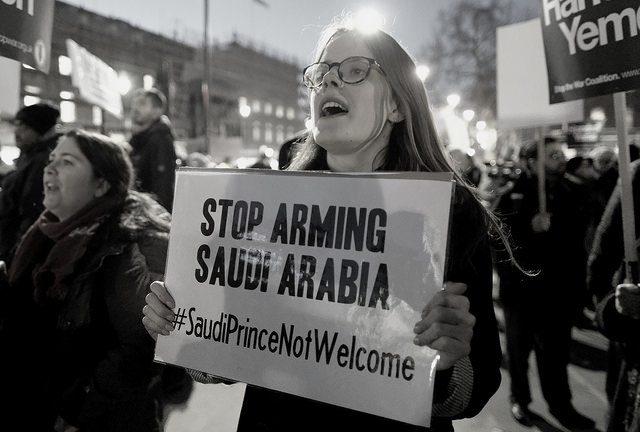 Britain’s close commercial relationship with the despotic Saudi regime has come under intense scrutiny in the wake of the murder of journalist Jamal Khashoggi in Instanbul two-weeks ago.

Britain is the second highest arms supplier to Saudi Arabia and has licensed £5 billion worth of arms to the country since the Yemen war began in March 2015. The British army and RAF also provides logistical and training support to the Saudi military.

The war in Yemen has claimed the life of over 40,000 people and has created the worst humanitarian crisis in the world. Last week the UN reported that the country is on the verge of the worst famine for 100 years.

ANALYSIS: The Saudis are vulnerable and Yemen is on the brink of famine – it’s time to march

Blackford stated: “Words of condemnation will not do. The UK Government must take decisive action following the death of Jamal Khashoggi.

“Then there is the brutal bombardment of Yemen pushing that country to the brink of famine.

“The killing of Mr Khashoggi has all the hallmarks of being a ‘premeditated murder’. Angela Merkel has announced her government will no longer approve new arms exports to the Saudi kingdom. That is moral leadership. Yet our Prime Minister will not commit to ending the sale of arms to the Saudi regime.”

READ MORE: Why Britain backs the bombing of Yemen and what it means for Scotland

The Prime Minister responded by claiming that Britain’s arms sales vetting procedures in place are amongst the strongest in the world, and offered no inclination that she would review her governments position of support for Saudi Arabia.

Foreign Secretary Jeremy Hunt has said the Saudi’s explanation for Khashoggi’s murder was not “credible”, but has defended arms sales to the country on the basis of its importance to the British economy.

Scottish Greens MSP Ross Greer responded to Blackford’s question by claiming his criticisms were “rank hypocrisy” due to the Scottish Government relations with arms dealers.

Arms manufacturing firm Raytheon make munitions for the Saudi regime and have a factory in Glenrothes, Fife. The firm has received grant funding from Scottish Enterprise, which claims the money is used to “diversify” the arms firm’s portfolio and is not used for arms used in the bombing in Yemen. However, after the Sunday Mail asked for documented evidence that this is what the money is used for, the Scottish Government quango could not provide any.

The Sunday Mail investigation uncovered that Paul Wheelhouse MSP, minister for energy, connectivity and the Islands, had requested that his visit to the Glenrothes plant was not communicated to the press.

Greer, the Scottish Greens international relations spokesperson, said: “It is rank hypocrisy for the SNP to ask Theresa May to stop selling these weapons when many of them are made here in Scotland by companies the SNP Scottish Government is only too happy to throw cash at, including after meetings they tried to keep quiet.”