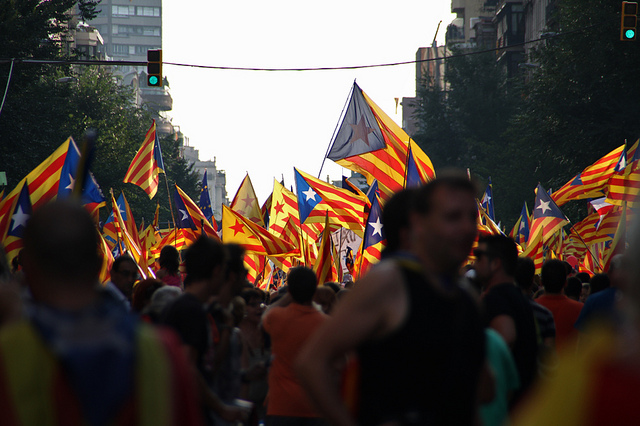 ON TUESDAY NIGHT, Catalan President Carles Puigdemont announced that he had signed a declaration of independence – however, he suspended implementation of the declaration to allow for negotiations to take place with the Spanish Government in the coming weeks.

Thus Catalonia finds itself in constitutional limbo, as the Spanish Government announces it has requested clarification on whether or not the Catalan Government has actually declared independence.

Spanish Prime Minister Mariano Rajoy confirmed in a speech on Wednesday that the Spanish Government may invoke article 155 of the Spanish constitution if independence is declared, which would revoke the autonomy of the Catalan Government.

“This call – ahead of any of the measures that the government may adopt under Article 155 of our constitution – seeks to offer citizens the clarity.” Prime Minister Mariano Rajoy

Rajoy said that he was asking for clarification from President Puigdemont, who he accused of creating “deliberate confusion”.

He said: “This call – ahead of any of the measures that the government may adopt under Article 155 of our constitution – seeks to offer citizens the clarity and security that a question of such importance requires.

“There is an urgent need to put an end to the situation that Catalonia is going through – to return it to safety, tranquillity and calm and to do that as quickly as possible.”

In a much anticipated address to the Catalan Parliament on Tuesday night, President Puigdemont said: “We call on international states and organisations to recognise the Catalan republic as an independent and sovereign state.”

However, in a caveat disappointing to some supporters impatient for independence, he added: “I propose suspending the effects of the declaration of independence to undertake talks in the coming weeks without which it is not possible to reach an agreed solution.”

Speaking to CNN on Wednesday, Catalan President Puigdemont explained that he had taken this position in order to comply with international requests for peaceful dialogue.

“We want a dialogue without preconditions – we have done a gesture with responsibility and generosity”, he said.

“We have listened to the world, especially Europe, and I think it would be very good if the Spanish Government also was generous and responsible and listened that this is the moment and the opportunity to open a dialogue without conditions.”

The question of Catalan independence, the Spanish Government’s handling of the situation, and the European Union’s response were running themes at the SNP conference this week, with a topical resolution passed by members expressing support for the Catalan people in the face of police violence.

All eyes remain on Catalonia as the situation unfolds.