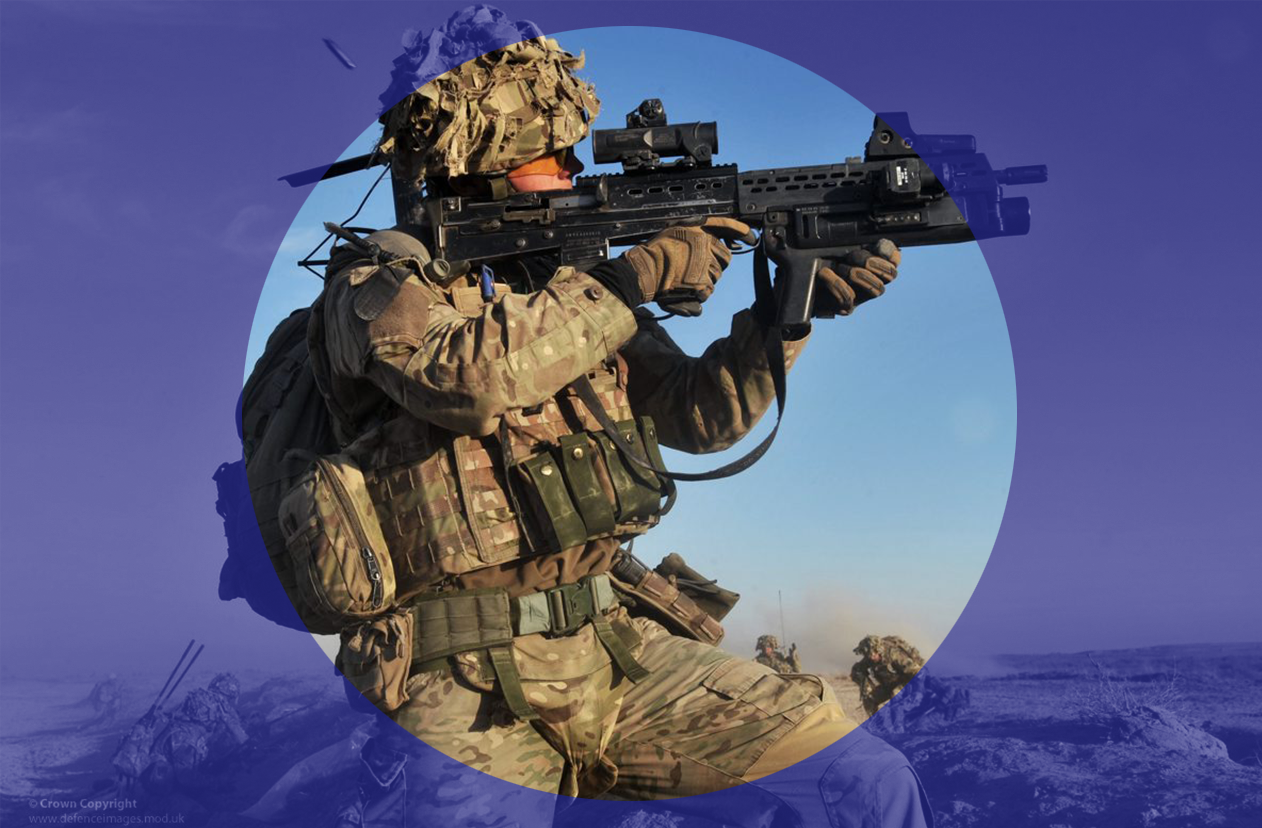 “As the UK Government doubles down on its ambition to assert state power at home and across the globe, it is all the more necessary for the left to demand that Scottish independence presents a real and genuine alternative.”

BRITISH SECURITY FORCES will gain explicit legal cover to commit crimes at home and abroad under new laws proposed by the UK’s right-wing Tory government with little – if any – resistance from the Labour Party’s new jingoistic leadership.

Under the Overseas Operations Bill, which cleared its first parliamentary hurdle last week, soldiers who committed war crimes such as murder, torture and sexual abuse while in the service of British imperialism in Iraq and Afghanistan will effectively be spared from investigation or prosecution. Meanwhile, the Covert Human Intelligence Sources (CHIS) Bill, first announced this week, will enshrine in law an existing MI5 policy allowing informants to commit crimes, potentially including murder. Both of these pieces of legislation form part of a wider pushback against scrutiny of the conduct of British security forces at home and abroad.

It is important to explore, for starters, the genesis of the two pieces of legislation now being considered by MPs. The seed that grew into the Overseas Operations Bill was sown in 2017, when the government dismantled the Iraq Historic Allegations Team (IHAT) and Operation Northmoor, which had been investigating allegations of war crimes in Iraq and Afghanistan respectively. This was justified on the basis of the scandal surrounding British lawyer Phil Shiner, who had improperly offered payments to people in Iraq and Afghanistan who were willing to bring allegations through his law firm. Although significant evidence was collected to substantiate many of the serious allegations brought to them through various routes, IHAT and Northmoor investigators were ordered to stand down and no prosecutions were brought forward. One former IHAT detective told a BBC investigation last November that they doubted whether the Ministry of Defence had, even at the outset, the “intention of prosecuting any soldier of whatever rank he was unless it was absolutely necessary, and they couldn’t wriggle their way out if it”.

There are many reasons why the UK Government does not want war crimes in Iraq or Afghanistan to come to light, even where they have taken place under different administrations. Firstly, knowledge of widespread misconduct by British soldiers, particularly against civilians, would undermine the moral and humanitarian grounds on which the UK finds it now has to justify all of its overseas military interventions. Secondly, the detail of the very worst crimes would sicken most people and undermine British patriotism and trust in state institutions, both crucial tools in the maintenance of a domestic status quo which disadvantages the UK’s working class majority. Thirdly, it would diminish the UK’s international standing and throw into further doubt the narrative that the West is a force for good, standing against the likes of Russia and China in defence of a rules-based order.

When Alexander Blackman, better known as ‘Marine A’, was convicted of manslaughter in 2011 for his battlefield execution of a wounded Taliban insurgent, he was able to rely on the sympathy of the mainstream British media as well as swathes of the British public who saw him as a hero. Despite being filmed executing a captured enemy fighter before blurting out “I just broke the Geneva Convention”, over 100,000 people signed online petitions calling for his release or lenient sentencing, including one launched by The Daily Telegraph. Journalists and media barons who pound the drum for imperialism and war are well rewarded; Charles Moore, editor of the Telegraph when it had to pay £150,000 in libel damages to George Galloway after accusing him of being in the pay of Saddam Hussein, is expected to be named the new BBC chairman. Meanwhile, non-conforming media outlets are left out in the cold, like Declassified UK, which was blacklisted by the MoD for reporting on the UK’s role in the war on Yemen, a decision only overturned after the threat of legal action.

The Blackman trial can be seen as part of a web of events in the past two decades which contributed to the consolidation of the political base for right-wing British nationalism, which soon afterwards fostered the growth of UKIP, the Brexit vote and Boris Johnson’s rise to power in the Tory party. There is a striking parallel with the upcoming trial of former paratrooper ‘Soldier F’ on two counts of murder linked to Bloody Sunday in 1972, which has aroused anger not only from unionism in the north of Ireland, as would be expected, but also from this strengthened British nationalist constituency, many of whose adherents in Britain proper continue to fight an imaginary war against the IRA even while being prepared to sacrifice the six counties for Brexit.

Labour’s new ‘centrist’ leadership under Sir Keir Starmer QC has set this British nationalist constituency in its political sights. It disgracefully pandered to it earlier this week when the Overseas Operations Bill was debated at first stage; the bill secured support by a wide 331-71 margin after Starmer instructed his MPs to abstain, even going as far as to sack three junior shadow ministers who joined other left-wing Labour MPs in a minuscule rebellion. Starmer’s own background as a human rights lawyer was not enough for him to heed the calls of human rights organisations, or even the Law Society of England and Wales, to reject the bill out of hand. It seems unlikely that Starmer will muster any stronger opposition for the inevitable separate immunity bill for former British soldiers’ conduct in the north of Ireland. Annabel Goldie, the other former Scottish Tory leader turned Baroness, made clear in the House of Lords this summer: “Yes, a Northern Ireland bill is coming forth to deal with similar issues; the Northern Ireland Office is currently in the process of preparing it.”

This brings us onto the CHIS Bill, announced in response to uncertainty over the legal basis for an existing state policy of allowing state agents and informants to commit serious crimes. Four NGOs – including the Pat Finucane Centre and CAJ, which campaign, among other things, for justice for victims of state repression in the north of Ireland – took the government to court over this policy in 2018. Last December, the Investigatory Powers Tribunal ruled by a narrow 3-2 majority that the government’s policy was lawful, but this outcome represented the first division among its judges in the tribunal’s 20-year history and augured badly for the expected appeal. The CHIS Bill avoids an embarrassing defeat or disruption to its covert operations by placing beyond doubt that MI5, police and certain other public authorities can lawfully authorise crimes. In practice, these crimes have ranged from British officials assisting extraordinary rendition for the CIA’s torture programme to loyalist gunmen receiving British weapons, directions and protection for terror attacks in Ireland.

In Scotland, it has become difficult to discuss covert MI5 operations because unfounded allegations are so carelessly thrown around, particularly on the fringes of the independence movement. There is, however, genuine cause for concern. Dr Issam Hijjawi Bassalat, a Palestinian GP in Edinburgh, was arrested last month as part of a major counter-terror operation targeting the so-called New IRA. He will likely languish in HM Maghaberry for years pending his trial, and even then we may not hear a satisfactory explanation of MI5’s involvement in the events leading up to his arrest. What is already in the public domain, mostly thanks to The Irish News in lieu of British media interest, is that MI5 agent Dennis McFadden, originally from Glasgow and possibly a former special constable in Scotland, deeply infiltrated Irish republican organisations in Scotland and Ireland over the course of decades. McFadden was central to ‘Operation Arbacia’, which led to Dr Hijjawi’s arrest and involved direct cooperation between Police Scotland and MI5. Dr Hijjawi’s defence, meanwhile, alleges that McFadden entrapped him. As Scotland Against Criminalising Communities has highlighted, the prosecution raises serious questions about the role of state forces in political activity. The SNP shows no interest in interrogating them; the Scottish Government continues, for example, to reject calls for a judge-led inquiry into spycops in Scotland.

In general terms, the SNP tends to distance itself from the Tories without explicitly disavowing the aims and record of British imperialism. It has always been an inconsistent ally of the anti-war movement – opposing the war in Iraq, for instance, but backing the bombing of Libya less than a decade later. The party’s conference decision in 2012 to support an independent Scotland’s membership of NATO drew it even further into western foreign policy orthodoxy, with its long-standing opposition to Trident now the sole outlier. Last year, the SNP supported the US-backed coup attempt in Venezuela and stayed silent on the successful far-right coup in Bolivia. Publicly-owned Scottish airports are quietly used to train Saudi military pilots and facilitate US military flights.

Stewart McDonald, the SNP’s defence spokesperson in Westminster, recently told the UK Defence Journal that Scotland and the rump UK “would share many common security interests and many of the same threats” and should seek “as close friendship as possible in areas of mutual interest”. During the debate on the Overseas Operations Bill, McDonald and other SNP MPs repeatedly stressed that they agreed with the principle of the bill but not the detail, effectively taking the same position as Starmer’s Labour. Instead of confronting the myths on which the bill rests, SNP MPs like Margaret Ferrier simply expressed their agreement with government ministers that British soldiers “do not deserve to be repeatedly investigated for vexatious claims against them”.

There is an urgent need for the pro-independence left, which views the break-up of the British state as a potential boost for the anti-imperialist cause, to press the argument for an emphatic break with the legacy and practice of British imperialism. This can begin under devolution; the Scottish Government has the power to shed new light on the activities of undercover police and informants in Scotland, and to end or at least frustrate Scottish police cooperation with British security forces. As the UK Government doubles down on its ambition to assert state power at home and across the globe, it is all the more necessary for the left, its organisations and its movements to demand that Scottish independence presents a real and genuine alternative.

Connor Beaton is a founding member of the new Republican Socialist Platform within the Radical Independence Campaign. He works as a journalist, focusing in particular on Irish legal affairs.