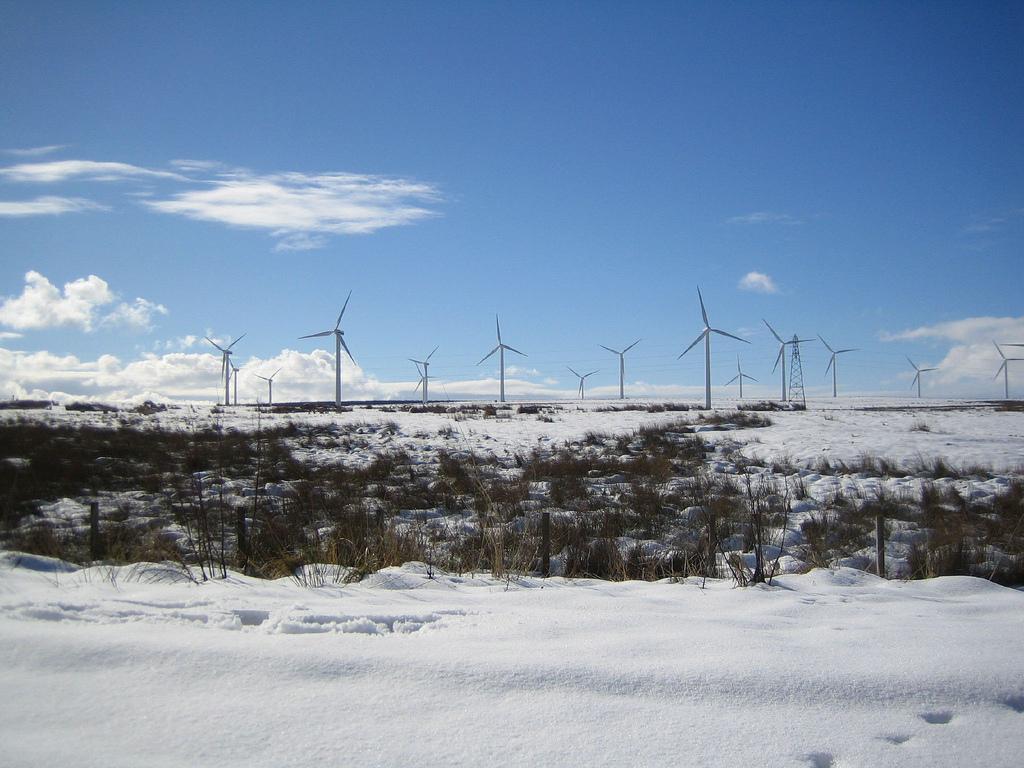 This consultation response is based on a report in 2013, Repossessing the Future: A Common Weal Strategy for Community and Democratic Ownership of Scotland’s Energy Resources , by Andrew Cumbers, Geoff Whittam, George Callaghan, Gordon Morgan and Mike Danson

The Scottish Government, local authorities and communities should be able to purchase land cheaply in order to create and run their own energy generation projects with the express aim of providing cheap, green energy for the citizens of Scotland.

Elsewhere, governments are rejecting privatisation at both national and local levels and are rediscovering the importance of state intervention, long-term planning and publicly owned energy utilities. At the same time there is growing evidence that the countries that have been most successful in developing renewable energy (notably Denmark and Germany) have done so through renewed forms of public ownership and state intervention rather than market-based solutions.

In this regard, the following key principles are at the heart of an Common Weal energy strategy:resources should be commonly owned to benefit the whole of society rather than vested interests;resources should be geared to social need rather than private economic return;respecting the rights of future generations and the planet, resources should be used sustainably and geared towards tackling climate change and developing a post-carbon economy;Scotland’s energy system should be planned by public bodies to achieve security of supply as a priority policy concern; public policy should be informed by collective decision-making and public deliberation (rather than faux consultation).

As far as possible, and recognising the other key strategic priorities outlined above, energy costs to consumers should be kept low with a progressive pricing system that allows subsidisation of poorer social groups and more remote communities.

To realise these principles a mix of forms of public ownership (both state and community) are advocated that allow strategic planning at higher levels to fuse with the encouragement of local democracy and community participation.

The future energy network required for a renewables based system offers opportunities for more decentralised forms of organisation that can enhance community participation and control over decision-making. The report further advocates the construction of ‘decentred’ institutional structures that spread economic decision-making power.

Examples from elsewhere – Germany, Denmark and Quebec offer alternative strategies that could work in the Scottish context.

An interesting development in Germany has been a trend towards remunicipalisation. According to a recent report by the Public Services International Research Unit, 44 new municipal companies (Stadtwerke) have been set up and over 100 energy concessions have returned to public hands since 2007 (Hall 2012).

In the remaining cities and regions that underwent some form of electricity privatisation in the 1990s, there are growing public campaigns to take the sector back into public ownership, including in major cities such as Hamburg, Stuttgart, Bremen, Frankfurt and Berlin, triggered mainly by the coincidence of poorer quality services with higher prices (Hall 2012).

The role of public ownership at the local level is increasingly important in sustaining renewable developments. The re-emergence of municipal public ownership of energy in Germany has also been accompanied by the establishment of new collaborative and partnership networks between cities and regions to promote public energy policies as an alternative to commercially driven and profit-centred strategies.

Additionally, many of the regional governments in Germany, notably the largest state Nordrhein- Westfalen and Baden-Wurttemberg have recently bought back energy generating companies from privatised entities (ibid). The motivation behind these developments was put succinctly by Dieter Reiter, Munich councillor in charge of labour and economic development in a conference address in 2011:

“Energy supply was one of the key sectors affected by privatisation of formerly public enterprises. Today, energy supply is characterised by oligopolies of private energy suppliers. There is practically no competition on price. The transition to renewable energies is made rather reluctantly and only as a consequence of massive state subsidies and regulatory requirements… The example of Munich shows how the transition process can be sped up if a city owns a utility company. By 2025, our utility company aims to produce so much green energy, that the entire demand of the city can be met. That requires enormous investments – around 9 billion euros by 2025 – and can only be successful if the long-term goal is sustainable economic success rather than short-term profit maximisation.” (Reiter 2011)

As Reiter and many other politicians at local and national levels are discovering, the long-term commitments needed to move towards post-carbon energy systems needs public investment and strategic planning.

Indeed, the EU Commissioner for Energy has now advocated the nationalisation of transmission networks across the European Union as a way of speeding up modernisation of grids and the development of a pan-European super-connector grid (Hall 2012).

In Quebec the province has massive hydro-electric power resources which are managed by Hydro-Quebec (HQ) – a public corporation at arm’s-length from government but with the principal objective of supplying cheap electricity to consumers. HQ has been a very important actor in the economic development of Quebec since the 1960s, playing a critical role in both innovation and the promotion of energy sector R&D, most recently with the development of renewables such as wind power. By imposing 60 per cent local content requirements in Quebec and 30 per cent in Gaspesie, wind power contracts in the more peripheral and economically marginal rural regions have been used to help develop local capacity. These regions have previously suffered from the decline of fishing, mining and forestry (OECD 2012).

A recent report by the leading international development think tank, the OECD, also noted from its international study of renewable energy opportunities in rural regions across Western Europe and North America that three of the most important institutional factors driving the most successful rural regions were “strong regional/local governments with wide powers to act, cooperative or community enterprises active in renewable energy and local/regional government ownership of power utilities” (OECD 2012, 62).

The Danish experience with renewable energy points us in the direction of a diversified and innovative mix of forms of public or common ownership that might enrich democratic processes in the economy.

In the field of energy policy Denmark has been held up as a model by the International Energy Agency for its far-sighted approach to tackling climate change. The country went from being completely dependent on foreign oil and gas for its energy needs in the 1970s to being self- sufficient in energy and generating a new renewable sector accounting for twenty eight per cent of its electricity needs by 2000.

The cornerstone of this success was the emergence of a wind power industry which has not only been at the forefront of Denmark’s strategy to increase self- reliance and reduce CO2 emission but has also created 20,000 jobs and given the country’s firms 50 per cent of the world market for wind turbine manufacture (DEA 2010).

By 1980 the Danish government had embarked upon a decisive strategy in support of renewables with a model of decentred and localised forms of collective ownership to the fore. There were three critical pillars of government policy:

First, government funding for thirty per cent of all investment in new wind turbines over the period from 1980 to 1990 giving an important boost to Danish windpower producers;

Second, the ‘Energipakken’, compelling electricity distribution companies to purchase a certain quota of energy supply every year from renewable producers as part of nationally set targets, strengthened in 1993 through an amendment to the Renewable Energy Act to set up a ‘feed-in’ fixed price tariff for ‘green energies’ of 84 per cent of the utility’s production and distribution costs;

Third, and most pertinent to our interests here, the encouragement of local and collective ownership of turbines. This has occurred largely through a series of laws that limit ownership of wind turbines to those residing in the municipality where the turbine is built, known as ‘residency criteria’ or distance regulation laws.

Although these ownership laws have been relaxed more recently, they gave critical political momentum to localised and collective forms of ownership which have had long-lasting effects. They have meant that wind turbine ownership remains dominated by either small-scale forms of private ownership (typically partnerships between local neighbours) or cooperative forms. The first Danish onshore ‘wind farms’, in the sense of larger scale activities that supplied more than a local neighbourhood, were all cooperatively owned. At its height in the late 1990s, it was estimated that 150,000 families or around 10 per cent of the population were involved (Cumbers 2012).

Boards of municipal companies (which tend to be the main urban centres) are appointed by the local government, whereas the cooperatives (which tend to be rural) are democratically elected by meetings of consumers. The regional companies are in turn elected by the representatives of the local boards. Overall, the Danish energy network is remarkable for both its level of public participation, democratic decision-making and the manner in which these powers are ‘de- centred’ and not bound up in one organisation or set of elite institutions. It has also created an active and knowledgeable civil society around renewable energy and climate change politics that represents a progressive force for broader processes of social and environmental change.

A much longer term approach to Scotland’s energy is required where energy resources are owned, managed and distributed for the collective good, and on behalf of present and future generations rather than being appropriate for private and corporate interests.

For a full outline of the way forward please see our report ‘ Repossesing the Future: A Common Weal Strategy for Community and Democratic Ownership of Scotland’s Energy Resources (2013) http://www.allofusfirst.org/library/repossesing-the-future-a-common-weal-strategy-for-community-and-democratic-ownership-of-scotlande28099s-energy-resources/

Common Weal advised our supporters via social media that this consultation was open. We received several comments which are included below.

“I live above the village of Cannich, completely off grid, using solar energy only. I am a supporter of Renewable Energy, and believe we need to urgently de-carbonise our economy. I also happen to be right next to the Beauly to Denny power line, which provides the infrastructure to export wind generation out of the Highlands, and as a result see an endless round of applications locally, and what appears to be a complete lack of planning or joined-up thinking. I dont want this entire area to become a giant cash generating wind turbine for private companies and their shareholders profits, which is why i think we need more shared ownership, and community wind farms, rather than the current free for all, taking place.

We have Soirbheas, locally reinvesting in community groups, the equivalent of one turbine out of five up at Corrimony, which is a start, but the answer is not just making a payoff to the community for each development unopposed.
We need a coherent Scottish energy strategy that will make sure the communities around these Onshore Renewable Projects have influence over their development and expansion, rather than purely allowing the market to dictate this.

The current situation where the areas generating the power are paying more for energy than urban regions,for example Argyll and Bute paying on average PS1,327 a year, in comparison with Edinburgh paying PS1,065 clearly illustrates how the energy infrastructure serves shareholders above the communities it impacts on.

Combine this with the ridiculous situation where a community co-operative that owns a wind turbine has to sell the power they generate to one of the power companies at 4.5p per unit – and then the individual consumers of this same energy have to buy it back at 15 or even 20p per unit, and we can clearly see a real need for change.”
Craig Bryce

“Here in Caithness most people live within sight or at least one onshore wind farm, yet we pay the most for our electricity. How unfair ! No wonder so many folk don’t want any more developments. Yes there are various community funds that benefit local organisations, but nothing would make people feel more positively about these generators like cheaper energy.”
Shona Scatchard