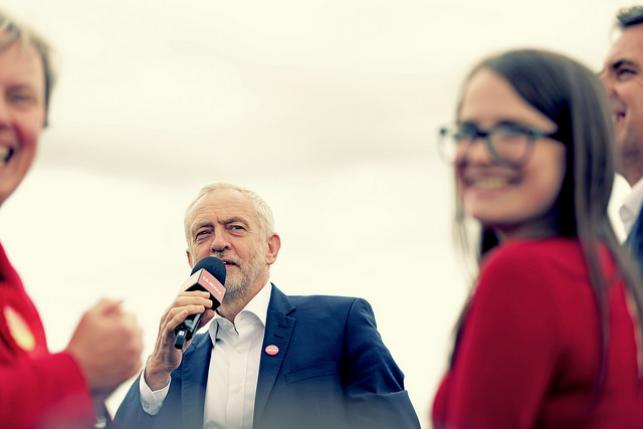 UK LABOUR leader Jeremy Corbyn sought to draw a clear divide between his party and the Tories and SNP at the party’s Scottish conference in Dundee, telling delegates that Labour were “obsessed with tackling the problems people face in their daily lives” not the constitution.

In his keynote speech, Corbyn argued that the real dividing line is not how people voted in the EU Referendum or on Scottish Independence, but between the richest and poorest in society, in a speech designed to shift focus away from the Brexit crisis and the escalating debate over a second independence referendum.

He said: “The truth about Labour is, we’re not obsessed by constitutional questions, like the others are. We’re obsessed with tackling the problems people face in their daily lives.

“Ending insecurity at work and ending poverty wages and ending the cuts to our public services.

“The real divide is between the many – who do the work, create the wealth and pay their taxes – and the few, who set the rules, reap the rewards and dodge their taxes.

“So let me spell it out: our mission is to back the working class, in all its diversity.”

The UK Labour leader has recently shifted closer to a position in support of the People’s Vote, with the party now committed to backing it in the House of Commons in a vote next week, but in Dundee he sought to emphasise class over constitution, arguing that climate change was more important than Brexit and “a class issue”.

“We need to reduce our net emissions to zero by 2050 at the latest – it’s not just an ecological priority, it’s a socialist priority too.”

On International Women’s Day, Corbyn reached into the history of Scotland’s radical working class tradition’s to argue for not just legal equality between women and men, but “economic equality too “.

Discussing the women-led Rent Strikes which led to rent restriction act, the first rent controls to be introduced in Scotland, he said: “Just think of the rent strike led by women in Glasgow in 1915.

“It’s a story that should be told to every new generation because it contains lessons for us still.”

He added: “Rent controls. For the first time in Europe. It was won by community action, led by women and the Labour movement.

“That’s what makes our party different. Because that’s where we come from. That’s what we’re about.”

He reiterated familiar criticism of the SNP-led Scottish Government, claiming that Nicola Sturgeon’s party had “passed down” UK Government cuts.

“The choice is now clear: Labour investment or more austerity from the Tories, passed down by the SNP,” Corbyn said.

Scottish Labour leader Richard Leonard told STV earlier in the day that Labour would oppose a second independence referendum even if there was a majority in favour of holding one in the Scottish Parliament, a similar position to that of Foreign Secretary Jeremy Hunt speaking in Glasgow yesterday.