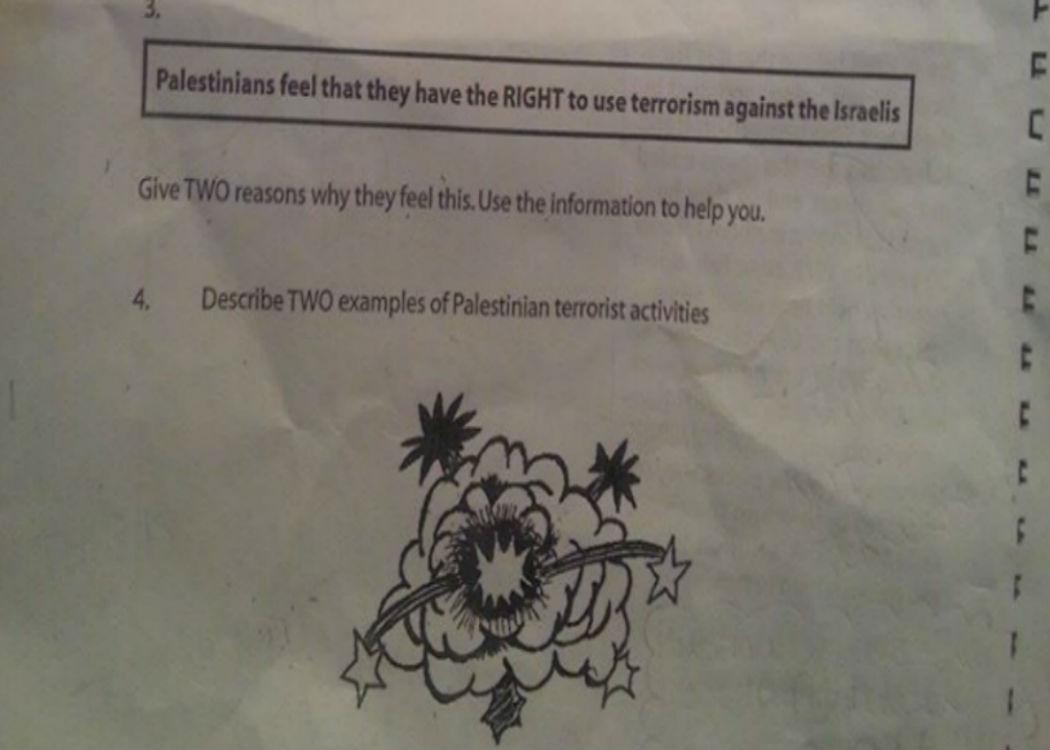 Palestinians in Scotland call for “biased” assignment to be immediately withdrawn

NORTH LANARKSHIRE COUNCIL is at the centre of a storm after distributing homework material in which Palestinians are described as “terrorists”.

An assignment titled “Case Study: Separatists” states that “Palestinians feel they have the RIGHT to use terrorism against Israelis” and asks pupils to give two reasons for this.

A representative for the Palestinian community in Scotland said the paper should be “withdrawn immediately”.

The issue came to light after the sister of a primary seven pupil at New Stevenston Primary school in Motherwell posted about it on Facebook.

A source at North Lanarkshire Council said the homework was likely to have been issued in schools across the local authority as part of the curriculum.

Aliyah Shafiq posted a copy of the homework and wrote: “How is my little sister being made to answer questions like this for her homework? This is completely unacceptable and has to be complained about to North Lanarkshire Council.”

The original image has been shared hundreds of times and the council has been inundated with complaints.

In the accompanying information alongside the homework, pupils are told that “Palestinians have turned to terrorist methods for over 30 years”.

The paper says that “recently terrorists have carried out SUICIDE BOMBINGS on buses and public places. They are respected by their own community as MARTYRS. A solution to this extremism is hard to find.”

Issam Hijawi, chair of the Association of Palestinians Communities in Scotland (APCS) said he was “shocked” by the assignment.

Hijawi told CommonSpace: “We are calling for this to be withdrawn immediately and we want to have a meeting with the education department at North Lanarkshire council to discuss how this situation arose.

“It is unbelievable that they are giving 11-year-old pupils information asserting that our struggle for freedom is pure terrorism.”

“It is unbelievable that they are giving 11 year old pupils information asserting that our struggle for freedom is pure terrorism.” Issam Hijawi, APCS

“The questions are not only biased but they are contradicting the legal framework of the Palestinian cause.”

In 1948, the state of Israel was created on historic Palestine and hundreds of thousands of Palestinians were made refugees. Since 1967, Israel has illegally occupied the West Bank and Gaza Strip. Under international law – specifically the Fourth Geneva Convention – people have the right to resist military occupation.

As of yet, there has been no comment from North Lanarkshire Council.