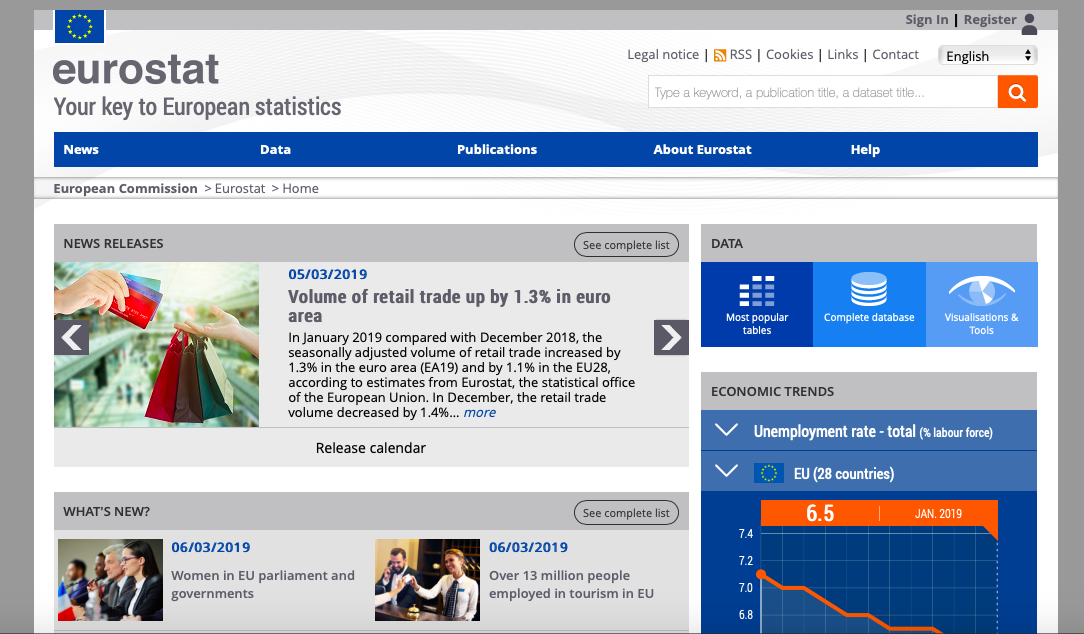 Craig Dalzell, Common Weal head of policy & research and author of a paper on the need for a Scottish statistics agency, makes a plea for the UK to apply for continued access to and continued active participation in the Eurostat statistical database post-Brexit.

At present, a deal has been agreed by the UK Government and the European Union which would allow a transition period lasting until 20 December 2021, beyond which the UK will move either into a backstop arrangement unless and until a new economic, political and trading relationship is agreed.

However, as of the time of writing, the agreed deal has been overwhelmingly rejected by the UK Parliament and no clear alternative has been agreed or proposed. Whilst “No Deal” has also been politically rejected by Parliament (though not formally ruled out by the Government), it remains the default result if a deal is not reached or if the UK does not rescind Article 50 and decide to remain in the EU after all.

The many possible outcomes of these events have led to great uncertainty for many sectors of the UK, notably the status of citizens living in the UK and in the EU, as well as the viability of many industries reliant on integrated supply chains.

READ MORE: MP and MSP back motion to SNP conference on establishing a Scottish Statistics Agency

Less attention has been paid to one impact of Brexit that will nonetheless have profound implications for the way that policies are developed in the UK post-Brexit and in the way that they are analysed and monitored after they are deployed. The act of Brexit may significantly impact the UK’s involvement in and ability to use statistics produced by the European Union’s statistics body, Eurostat.

There is no mention of Eurostat or the UK’s continued involvement with the body within the Withdrawal Agreement, and should the UK exit the EU without a negotiated deal, there is no automatic provision for such involvement. It is not even clear if researchers and members of the public based in the UK will have access to the Eurostat database post-Brexit.

If access is possible, there is currently no clarity on whether or not the UK will continue to submit data for inclusion in the Eurostat database, the omission of which would have a deleterious effect on the ability for statisticians to compare and contrast the UK with other countries in Europe on metrics such as GDP, income equality, education and hundreds of other measurements. It is already the case that Eurostat have updated the filters on their database so as to allow the optional automatic recalculation of EU-wide averages in datasets with the UK omitted.

Without any statement of intent from the UK Government on this matter, Eurostat themselves have been unable to provide me with any information about whether either of these barriers will be raised. As with so many other things surrounding the UK’s Brexit process, this seems to be something that the UK simply has not thought through – or thought about at all.

If the UK drops out of the database entirely, a more subtle impact of Brexit may become felt. Currently, many UK statistics are bound to conform to standards of data collection and methodology defined by Eurostat. This allows statistics to be easily compared on an equal footing. Should Brexit result in a divergence – however slow or rapid – between the methodologies used by UK and EU statistics then the cross-comparability of statistics may become difficult or impossible. In the hands of a less-than-scrupulous government, this could easily be abused as a mechanism to obfuscate evidence for or against policy decisions or to dodge responsibility for the impact of a harmful policy.

The total operational budget for Eurostat was €89.3 million in 2017, of which it can be presumed that the United Kingdom’s contribution (based on it’s 11.82 per cent share of the total EU budget after rebate) was around €10.6 million or around £9.5 million at current exchange rates.

This compares to the UK’s total gross expenditure on the UK Statistics Authority of around £220 million in 2017.

It is vital that the UK gives consideration to the important benefits stemming from the UK’s inclusion in Eurostat, gives consideration to the requirement that the UK’s statistical methodologies remain cross-comparable with EU sources regardless of the UK’s inclusion in the Eurostat, and that the UK makes formal representation to continue to pay its modest contribution towards the running of Eurostat so as to ensure continuity of service for researchers, policy-makers and the general public regardless of the final terms of the UK’s withdrawal from the European Union.

The accurate, verifiable and transparent publication of statistics is critical for the effective provision of policy and the proper level of scrutiny and democratic accountability demanded of all governments.

The decision to leave the European Union should not be used as a mechanism to reduce access to statistical information and thus turn the UK into a data desert.