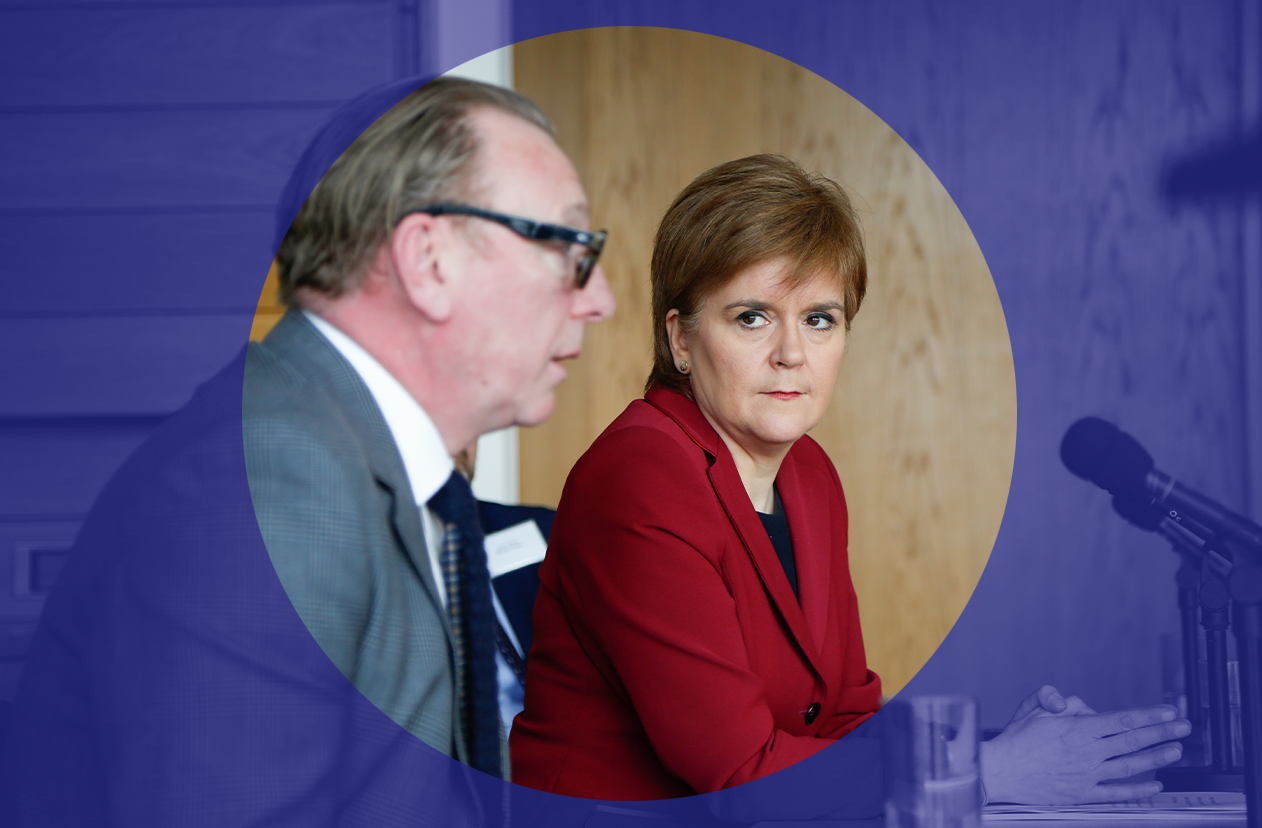 The Scottish Government’s response to the Advisory Group on Economic Recovery is a pathetic attempt to validate regressive, right-wing policies and spin their way out of a crisis.

Back in April, just as the Covid crisis was reaching its first peak, Nicola Sturgeon announced the formation of the AGER to present a vision for rebuilding the economy – not just to repair the damage wrought by the current crisis, but to prepare for the climate emergency to come.

In Sturgeon’s own words: “It is important we now seek to take a more longer term view… and we are now starting to consider how we re-build the economy when this crisis starts to recede. None of us should be under any illusions of the scale of this task – but we do want to start that work now.”

Common Weal also rose to that challenge to present our version of what we thought that rebuilding would mean. It resulted in our Resilience project: a series of four papers covering the economic underpinnings of our plan, a route out of the current crisis, and ambitious manifesto and action plan for the next Parliament and then a 20 year plan for an independent Scotland to complete the Green New Deal.

By contrast, when the AGER published their report in June it almost immediately fell apart. Common Weal noted that there was a substantial gap between the language of its aspirations and the information within on how to achieve them. The vast majority of that report called for little more than doing what the Scottish Government was already doing – just a little bit faster in places. It was hardly a rallying cry for crisis recovery.

The Scottish Government response published yesterday is pathetic even compared to the AGER document. While it adopts almost all of the principles recommended by the group – at least in part – it does so almost entirely by either kicking the recommendation out to another committee, working group or “exploration”, or tries to use the report to “validate” (the Scottish Government’s own word) existing policies and proposals.

That repeated refrain of “validation” is the most needlessly needy part of this response. Instead of creating ambitious goals and striving towards them, the Scottish Government is instead preoccupied with gaining approval for their less than impressive policies. Instead of a bold path of recovery forwards, we get ‘we’re already doing OK but I guess we’ll do a little bit more’.

For all the talk of trying embed Scotland into the community of “Wellbeing Economy Governments” around the world, I wonder if the Scottish Government has internalised what a Wellbeing Economy actually means. It certainly doesn’t mean giving a “central” role for the private sector that has done so much to create the economic and social problems we currently face. And the comment in the report that a Wellbeing Economy “is not about zero or de-growth for Scotland” before spending entire pages touting a “green” and “sustainable” economic growth agenda stands in direct contradiction to Zero Waste Scotland’s Decoupling Advisory Group which stated that even “Green Growth” is not sufficient to meet environmental and wellbeing targets. (Disclosure: I was a member of the DAG)

Almost all of the policies featured in the response are described in the past tense – things that the Scottish Government has already done before the AGER produced their report. Most of the ‘new’ initiatives are just continuations or accelerations of old ones and, most importantly, there is very little in the way of new money in here to build on any changes of any kind of new strategy that the AGER report may have prompted. They seem to think that they can spin their way out of a crisis.

Worse are the actual policies that the Scottish Government have decided to promote in their quest for validation. Let’s start with the recent cut to Land and Building Transaction Tax – a move prompted by a similar though larger cut in housing taxes announced by the UK Government and quite plainly brought in to try to placate Conservatives who would demand that the SNP match Tory policy (of course, by not fully matching the cut, the Tories weren’t placated anyway). Consider the “£3 billion Green Investment Portfolio” which doesn’t involve the Scottish Government investing £3 billion in Scottish renewable energy but instead proposes selling off £3 billion worth of Scottish renewable assets to foreign investors. Similar notes are sounded in the section on forestry where the Government congratulates itself on “enabling the private sector to expand at an increasing rate”.

Where Common Weal has proposed an Artists Basic Income and a Festival of Scotland to sustain and promote artists through the crisis, the Scottish Government promises merely to “pilot and evaluate more strategic and sustainable approaches to funding for culture and the arts”. On Social Care, nothing new – just an “acceleration” of existing policy. Instead of a badly needed overhaul of public procurement as we have called repeatedly for, instead we just get “new targeted questions in the annual Small Business Survey to inform market-friendly approaches”. Instead of reforming the Scottish banking sector and launching a public retail bank, the Scottish Government shall “continue to influence the banks to take responsibility”. On housing, instead of, say, a new public rental eco-house programme, we just get plans to publish the Housing to 2040 report that was already scheduled to be published anyway. (Disclosure: I’m currently part of a Housing Policy Advisory Group trying to make improvements to that report).

If there’s a saving grace in the report, one policy that doesn’t appear to have made it was the suggestion that the Government buys equity stakes in struggling companies and sticks them in an arms-length financial management group to let a bunch of appointed bankers play with them. Instead, this specific recommendation has been farmed out to yet another working group to report back later in 2020 – I guess we’ll see what the policy looks like when it comes back round that time.

The most disturbing of the actual new policies comes in the form of how the Scottish Government proposes to meet the recommendation that they strike a “new collaborative partnership” with the private sector to influence policy direction. As a result of the AGER report the Scottish Government has pledged to “change the culture” of the Scottish Civil Service through “inward and outward secondments to and from business”.

Read that again. The Scottish Government – which is already too well known for being influenced by shady business lobbying – wants to increase business access to the Civil Service in order to change its culture.

I’m generally known for being quiet and calm in most situations – not prone to emotional outbursts – but when I read that line, there was a certain amount of swearing and I had to step away from the computer for a while.

I shouldn’t have been too surprised that the AGER have lobbied for something like this. Just yesterday, AGER member Benny Higgins was in The Times telling us that the Green Lobby was trying to wreck his plans and that companies like BP most certainly can focus on environmental change and a wellbeing economy (BP is estimated to have produced more than 1.5 per cent of global greenhouse gas emissions between 1988 and 2015 and is the 11th most polluting company on the planet). His specific ire at groups like Friends of the Earth is especially misplaced given that they have shown that a transition away from oil and gas and into renewables would create many times the number of jobs as it currently supported by the North Sea.

But I am disappointed that the Scottish Government have offered this kind of back-channel direct access and still hope to be seen as some kind of a progressive political institution. This is the exact opposite of what we should be doing.

Imagine if Boris Johnson had come up to Scotland, stood shoulder-to-shoulder with Douglas Ross to announce that he was going to keep inflating house prices, denigrate the environmental movement, push growth and the private sector over actual recovery and wellbeing, sell off Scottish energy assets and compromise the Civil Service to make it all happen.

If it had been the Tories suggesting all of these changes, I’m sure the Scottish Government would be shouting loudly about how they were very much opposed to this kind of thing. As it is, the Scottish Government themselves have adopted this plan – without consultation with party members I might add – and expect us to believe their spin about how wonderful it will be for the wellbeing of Scotland.

The last thing worth mentioning in the response is a call for business leaders “and others” to provide “constructive challenge” to the Scottish Government. Common Weal has heard that call – we have continuously offered our constructive advice. Friends of the Earth will have heard it too. As will have the Wellbeing Economic Alliance and all of the other progressive forces in Scotland. We have spent years making these constructive challenges and we are ignored far too often.

Since we are not being offered backdoor access to your policy-makers we will have to change the focus and ask the Scottish public: Are you listening? Can you see what we see?