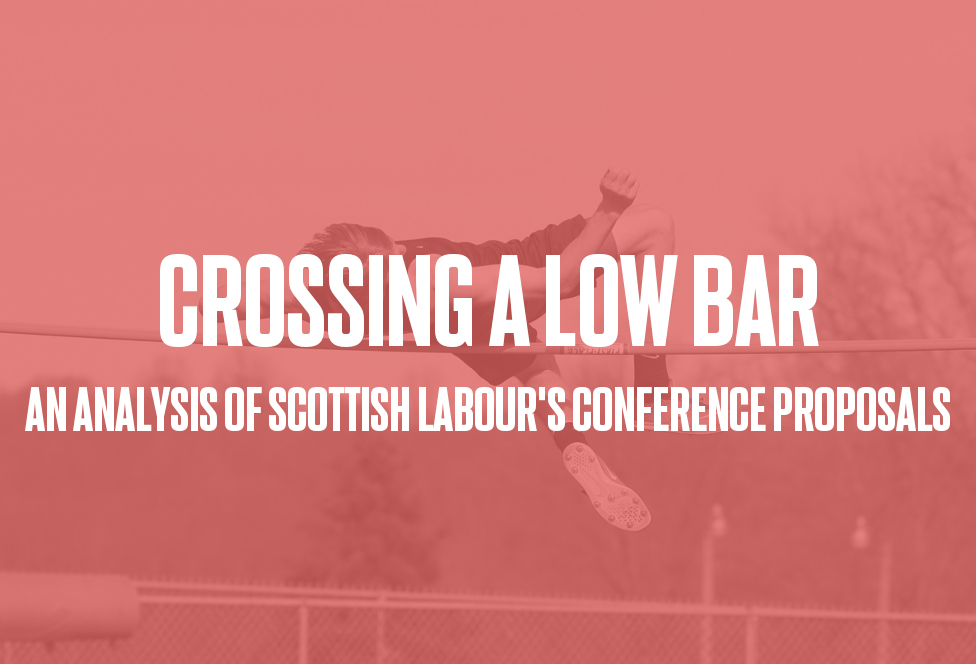 Scottish Labour’s new pitch to voters are only a step above a depressingly low bar, says Common Weal’s Head of Policy and Research Dr Craig Dalzell as he analyses Richard Leonard’s speech to the Labour Party conference today.

Politics is a game of competition. Of standing out above the crowd and above those who would be your opposition. Of being better than anyone else who would vie for the support of those who would place you and not the other into power.

But both Scottish and UK politics recently have shown a grave weakness in this game. It is not necessary to be “the best” in order to win power. One only needs to be a vote or two better than the next best in the field.

I’m broadly supportive of the new Scottish Labour policies announced by Richard Leonard this morning. Many of them could have been taken directly from Common Weal’s policy library. But throughout it all, there does seem to be a general lack of joining up the policies with a coherent vision or with their logical outcomes.

Allowing councils to buy land at existing use value is a vital policy. Right now, if cheap brownfield or agricultural land is given planning permission for housing then its value rises as if the houses have already been built – even if the landowner decides to hold on to that land for years until the price rises to their liking or till they’ve built and sold houses elsewhere (why flood the market by building all of the houses that we need when you can build just enough to keep prices high?). “Existing use” would allow a council or local co-operative to buy the land at its current cheap value and then build the houses we need. This allows the council to build social housing far more cheaply but it also allows them – not the previous landowner – to “capture” the value of the now-developed housing land should they ever decide to sell the property.

It’s a good policy but what is missing is the means to fund the new house-building and a co-ordinating body – a National Housing Company – to ensure that the new houses are built to the highest possible energy efficiency standards – after all, if we know that we are experiencing a “climate emergency” and need to transform housing into a zero-carbon industry then why are we building houses today that we will need to retrofit tomorrow?

Workplace democracy is a vitally important thing and is something that Common Weal has endorsed since before we existed as a distinct organisation but wrapping this policy up within talk of reforming the broken constitutional issues facing the UK is an error. This risks muddying the waters of two important topics to the point of impenetrability. Constitutional law and the every-day governance of economic policy must be held apart.

Speaking of the constitution, Labour’s long held promise of Federalism rears its head once again with a promise of replacing the House of Lords with a Senate of the Nations and Regions. This is precisely in line with one possible model put forward by our paper on the topic, An Unequal Kingdom, but we continue to wait for solutions to the barriers thrown up by this proposal. Which powers will be moved to the Senate? Will this only include powers currently held at the House of Commons or might it include powers devolved to Scotland, Wales or Northern Ireland? Will the English regions be given comparable levels of devolution to the nations? Will Yorkshire Law become a thing on par with Scots Law?

Will England consent to being dissolved as a legal entity under such a Federation? Will England vote for this change knowing that it is almost entirely being put forward merely as a “radical” counter proposal to contrast with Scottish independence?

For my part, I’m in favour of a Federal UK but it clearly must function whether or not Scotland remains within the UK to be a part of it and constitutional reform must certainly not be used as a tool to actively block democratic ambitions the way that the Spanish constitution is being used to crush Catalonian democracy.

And, of course, public transport is another area where Common Weal has campaigned actively. We support not just the ending of Abelio’s Scotrail franchise but the abolition of the franchise system altogether – replacing it with a truly publicly owned rail system integrated at all levels and, crucially, integrated across all forms of public transport. We are proud to be collaborating with organisations such as Get Glasgow Moving to show how this can be done.

At this point I must turn my attention on supporters of the Scottish Government who may be instinctively rubbishing even these proposals without looking at the positive steps in them. To that audience I must say that even despite my real and sincere critiques above I maintain that they do indeed represent a step beyond much of what is being offered by the Scottish Government. That the step being offered is so low and that the bar to step beyond has reduced so far should be a depressing sign of weakness ahead of the 2021 elections. Scotland needs not a step but a political high jump. If nothing else, I hope that this speech jolts other parties out of complacency. They should be trying to exceed each other rather than trying to merely avoid declining as fast as everyone else. A strong and vibrant Government should be pushed upwards by a strong and vibrant opposition. Scotland can only benefit from that, no matter which party happens to be in charge at the time.

Even as incomplete as it is, Labour’s new package would be an ambitious one by current political standards if it wasn’t for the looming climate emergency. In the face of that, it seems strange that only a token effort was made even to reference a “green economy” and no measures are apparent here from which to deliver it. Scotland is in a unique position to punch above our weight with regard to tackling climate change and then to help others follow by exporting our skills, knowledge and technology but if Scottish Labour is unwilling to rise to that challenge it may be inferred that they are content to simply accept whatever their UK counterparts plan for them and for Scotland. We are not. Common Weal will soon be publishing an extensive roadmap for a Green New Deal for Scotland. It will utterly transform everything in Scotland from energy and heat, through transport and agriculture to the very way we shop, consume goods and recycle our waste. I’d hazard that few if any parties in Scotland, or the UK, are currently thinking as big as we are on this and we hope to be setting a new bar for Scottish politics to rise above. I wonder if any of the parties will have the ambition to meet that challenge.